A survey conducted by a local pollster days before the May 9 presidential election showed most people here are pessimistic about the possibility of their country passing what is regarded as the threshold for joining the club of wealthy advanced states anytime soon.

The survey was conducted on the premise that then-presidential candidate Moon Jae-in’s election was almost certain, as he had been far ahead of other candidates in opinion polls. During his campaign, he pledged to push for income-led growth by creating a massive number of jobs in the public sector and expanding benefit programs.

However, the country’s income level might stay below or change little from that reached during the terms of his two conservative predecessors by the time President Moon leaves office.

Shortly after being sworn in last week, Moon announced a plan to draw up a supplementary budget worth 10 trillion won ($8.93 billion), mainly to fund the creation of 12,000 public sector jobs in the second half of this year.

His assumption is that increasing household income by boosting employment and expanding welfare benefits would lead to boosting consumption spending, which would in turn result in galvanizing corporate investment.

This approach may seem relevant, considering stalled household income and soaring household debt are weighing on domestic spending, hampering the recovery of the economy.

The country’s household disposable income per capita grew a mere 0.9 percent from a year earlier to $15,632 last year, according to government data. Furthermore, income inequality widened, as the wealthiest 20 percent of households earned more while the poorest 20 percent saw their incomes decrease.

“It is irresponsible to leave the economy to the private sector and wait for a recovery when marginal households number nearly 1.8 million,” said Kim Kwang-doo, an economics professor at Sogang University who is known as an architect of “Jnomics,” a term coined by commentators to describe Moon’s economic plan.

The difficult situation faced by many households may lend weight to Moon’s argument that previous administrations’ policies to boost growth by focusing on support for large companies have failed, as their profits have not trickled down to subcontractors and workers.

He has pledged to curb the growing influence of big conglomerates along with efforts to strengthen the social safety net and increase the earnings of low-income families.

Economists say it should also be noted that the snail’s pace of deregulation and structural reforms, often blocked by lawmakers from Moon’s party, have hindered companies from enhancing competitiveness and improving productivity.

This could be one of the main factors responsible for the country being stuck in a low-growth rut over the past years.

Korea’s economic growth rate has hovered below the global average since 2011, according to data from the International Monetary Fund. Asia’s fourth-largest economy has grown below 3 percent over the past years, except for 2014 when it expanded 3.3 percent. 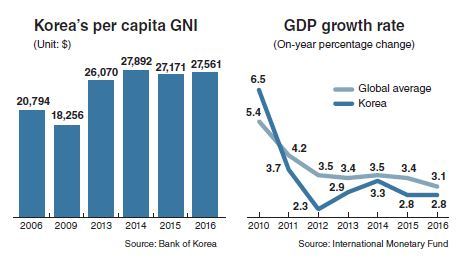 Sluggish growth will continue to make it hard for Korea to push up its per capita income above the $30,000 level. The country’s failure to reach the landmark figure for more than a decade looms large, given it took five to nine years for major advanced economies such as the US, Japan and Germany to increase their per capita income to $30,000 from $20,000.

“Income could increase only through economic growth,” said Kang Sung-jin, an economics professor at Korea University, calling on the government to avoid implementing policies that would dampen corporate activity.

Keeping regulations and government-led policies can hardly ensure sustainable growth and job creation, posing hurdles to the country’s escape from the middle-income trap, he said.

In the survey early this month, more than 15 percent said it would be forever impossible for Korea to achieve the per capita income of $30,000, suggesting weakening confidence in the country’s economy.

Economists say Moon needs to balance his drive for people-oriented growth with efforts to forge a more business-friendly environment in order to help spur growth.

Moon’s aides estimate it would cost 178 trillion won to finance his expanded employment and welfare programs, saying it would be possible to raise the sum by readjusting fiscal expenditure and overhauling the taxation system.

But critics say the cost has been underestimated and even if it is calculated correctly, the funding methods would prove insufficient to cover it.

Moon has said that he would consider, if necessary, raising taxes based on public consensus. It would be a daunting task to gain such consensus with nearly half of wage earners and companies in the country exempt from tax payments.

His promise to increase the hourly minimum wage, which is now pegged at 6,470 won, to 10,000 won by 2020 could also drive many self-employed businesses and small firms into marginal situations.