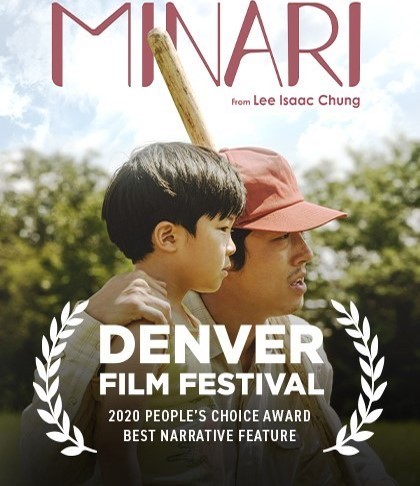 With films such as “Green Book,” directed by Peter Farrelly, and “Three Billboards Outside Ebbing, Missouri,” directed by Martin McDonagh, having gone on to Oscar nominations after winning awards at the Denver Film Festival, hopes for “Minari” within the local film industry got a boost with the latest win.

The 2021 Academy Awards are scheduled for April 25, and the nominees will be announced March 15.

Steven Yeun, one of the lead actors in “Minari,” also won an award for excellence in acting at the Denver Film Festival along with Winston Duke and Zazie Beetz, who starred in Edson Oda’s “Nine Days.”

Set in the 1980s, “Minari” depicts a first-generation South Korean immigrant family of four -- dad Jacob Yi (Steven Yeun), mom Monica (Han Ye-ri), son David (Alan S. Kim) and daughter Anne (Noel Kate Cho) -- that moves to a farm in rural Arkansas  in the US in pursuit of the American dream. One day Monica’s mother (Youn Yuh-jung) comes to America to live with the Yi family and take care of the kids while Jacob and Monica head to work.

“Minari,” which was inspired by the director’s own immigrant experience, has received positive reviews at multiple US film festivals this year. It won both the audience and US dramatic competition prizes at the Sundance Film Festival in January. In October, the movie also won the ensemble cast spotlight award at the Middleburg Film Festival.

Veteran actor Youn has been nominated for best actress at Gotham Independent Film Awards 2020, which will take place Jan. 11 in New York.

“Minari” will be released in New York and Los Angeles on Dec. 11 before a wider US release set for Feb. 12. The film’s Korean release is expected in early 2021.