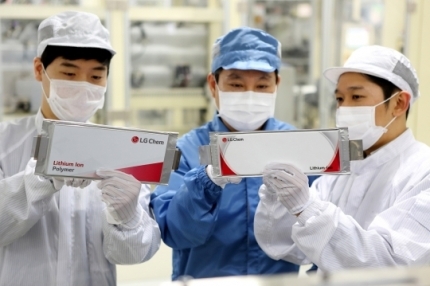 At one point during the day, the price rose 11.47 percent to 758,000 won from a day earlier, hitting another record high.

LG Chem’s market value has surpassed 52 trillion won, up more than 4 trillion won from 48.28 trillion won the previous day. This propelled the firm above Naver, Samsung Biologics and Celltrion in the market, bringing it to third in the nation’s main bourse Kospi during the day.

At the same time, shares of other battery makers, such as Samsung SDI and SK Innovation, rose 3.94 percent and 12.54 percent, respectively.

“As electric vehicle-related industries expand valuation, the shares of those companies are expected to be revalued.”

The surge of Korean battery makers on the market also came amid news of Tesla abandoning plans to launch its unique energy storage systems -- Tesla Energy -- products in Korea due to difficulty in the certification processes.