[Monitor] How much will new coronavirus hurt exports to China? 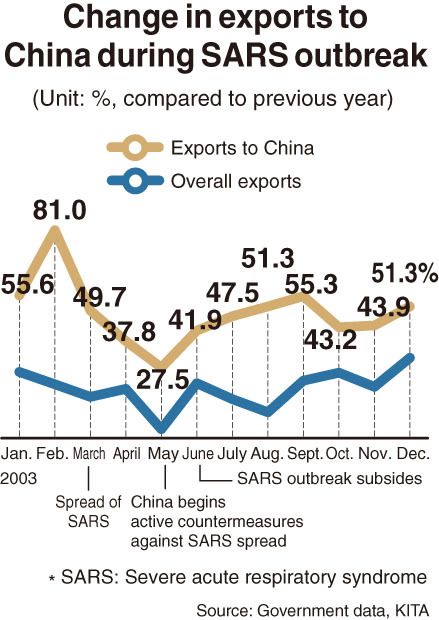 With the on-going outbreak of the novel coronavirus (2019n-CoV), concerns have been rising over the impact it will have on the country’s overall exports that have only just begun to show signs of rebounding.

Looking back at the Severe acute respiratory syndrome outbreak in 2003, the growth in Korea’s overall exports slowed down in the short term but did not hamper the yearly performance.

In the whole of 2003, Korea’s exports surged 19.3 percent on-year. By month, the increase rate had hovered below the annual average in March and April at 16.1 percent 19.2 percent, respectively, while continuing to maintain an upward trend.

Exports to China, meanwhile, fluctuated wider during the outbreak, with the export growth rate coming in at 27.5 percent in May -- when China began to aggressively take countermeasures. It was that year’s lowest growth rate.

With some of Korea’s major exporters temporarily suspending their manufacturing, the Seoul government has also been voicing concerns over the potential damage to the economy whose export reliance on China has increased from 18.1 percent in 2003 to 25.1 percent at present.