By Jie Ye-eun
Published : Jan 28, 2020 - 18:09       Updated : Jan 28, 2020 - 19:10
South Korean stocks trimmed their losses Tuesday, losing 3 percent on the first trading session after the four-day Lunar New Year’s holiday, as the fast-spreading Wuhan coronavirus outbreak weakened investor sentiments. The local currency closed at 1,176.7 won against the US dollar, up 8 won from the previous session’s close, declining to a two-month low.

Other major stock exchanges in Asia, such as the Shanghai composite and Hong Kong’s Hang Seng Index have been shut down till Thursday and Tuesday, respectively.

Major stock market indexes followed losses on Wall Street Monday amid rising concerns over the spread of the Wuhan coronavirus. The Dow Jones Industrial Average declined 453.93 points, or 1.57 percent, closing at 28,535.80. The Nasdaq retreated 1.89 percent and the S&P 500 slid 1.57 percent on the same day. 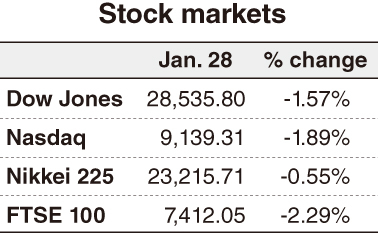 “There are fears that the virus will likely impact the local stock market for a while. It’s inevitable for Kospi to avoid a decline in the short term. It may drop by up to 3-4 percent, with a likely trading band of 2,150-2,170 points,” said Lee Kyoung-min, an analyst at Daishin Securities.

While investors both at home and abroad turned away from the equity market, they are increasingly turning to low-risk assets such as Treasury bonds and gold.

Gold prices have also soared -- beginning with 59,600 won per gram, up 1.74 percent from Thursday’s closing price, according to the Korea Exchange. The strong start continued through the day and it closed at 59,700 won per gram, up 1.91 percent from the previous session. The total amount of trading marked 122.917 kilograms, 530 percent higher from the previous session.

Market watchers attributed the drop in the KTB and surge in gold prices to stronger investor appetite for less risky assets.

“As the market is jittery, investors tend to prefer low-risk assets now. However, investors also need to be aware of excessive investments in such assets, while paying attention to the possibility of success in China’s actions and global cooperation toward containing the coronavirus outbreak,” said Shin Dong-soo, an analyst at Eugene Investment & Securities.