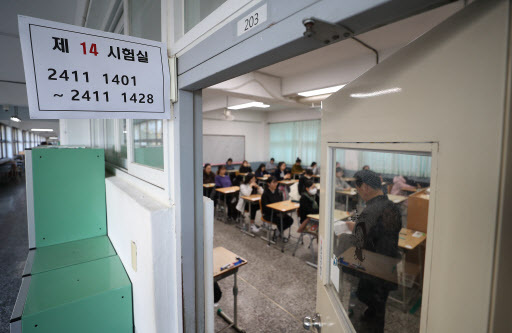 [1] Nearly half a million people sat for the annual state-administered college entrance exam Thursday, with the number of test-takers marking an all-time low.

[3] The Suneung, which has been held only once a year since 1993, covers five subjects, including Korean, math and English.

[4] The level of difficulty for this year’s Suneung was in line with the high school curriculum -- easy enough for students who faithfully attended classes, said Shim Bong-seop, head of the exam committee.

[5] This year’s test results are scheduled to be released on Dec. 4.

[6] Two students were expelled from the exam, for submitting the exam answer sheet late and having a laptop, respectively. Electronic devices are not allowed inside the exam venues. Airplane landings and takeoffs were banned from 1:05-1:40 p.m. during the English listening test portion of the exam.

[1] More than 10,000 people were caught driving under the influence of alcohol during a 50-day nationwide crackdown on reckless driving, the National Police Agency said Sunday.

[4] Six others were caught for abetting drunk driving and four for disturbing traffic by driving abnormally slowly.

[5] The authorities will extend the crackdown period until Dec. 27, mobilizing undercover patrol cars and drones, in light of the upcoming year-end season when the number of drunk drivers tends to surge. Repeat offenders caught during the period will be detained and their vehicles will be seized, police added.