It said Kim gave field guidance to the Jungphyong Vegetable Greenhouse Farm and Tree Nursery under construction in Kyongsong County. 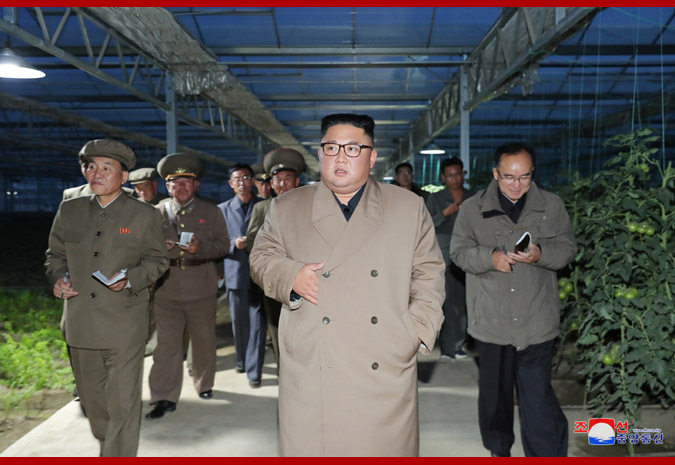 “It is essential to meticulously operate and manage the farm so as to show our success in the production the vitality of a highly intensive vegetable production base directly related with the improvement of the people’s dietary life,” Kim was quoted as saying.

The KCNA said Kim underscored “the need to actively introduce advanced techniques and methods of vegetable culture to increase the output and activate production so that the people of North Hamgyong Province can benefit greatly from the farm.”

Senior party officials who accompanied the leader on the visit included his sister Kim Yo-jong, Jo Yong-won and Hyon Song-wol.

This is Kim’s second such field guidance to farm publicized by the state media since North Korean nuclear negotiators walked away from a working-level meeting with the US counterparts on Oct. 5. The meeting held in Sweden was supposed to break a monthslong deadlock between the two countries but failed to generate a tangible result.

On Oct. 9, Kim visited a farm of the Korean People’s Army to look around crops of high-yielding varieties, calling on the agricultural scientific research sector to study farming methods for increased production in intermediate and mountainous areas.

The public activities appears to be designed for promoting self-reliance to prop up its economy.

During the visit, Kim said that the Jungphyong farm is “a revolution, model in the building of greenhouses,” adding that to build such a modern greenhouse farm in each province to supply various species of fresh vegetables to the people all the year round is a thing he has long wanted to do certainly, the KCNA said.

According to the UN agencies’ report in May, some 10.1 million people in the regime of its 25.2 million population suffer from severe food insecurity.