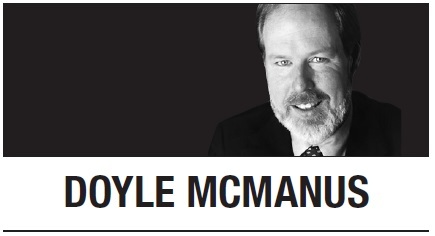 No matter how the current crisis between the United States and Iran turns out, it should have one result: an end to the fear that President Donald Trump would be a warmonger in the Oval Office.

Trump has been inconsistent about many things, but he’s been strikingly consistent about this: He would rather talk than fight. Time and again, he’s threatened other countries, sometimes in bloodcurdling terms, but then made clear that he’d prefer to negotiate.

Take Iran. Last month, as tensions rose, the president threatened to destroy the entire country, or at least its Islamic regime.

Then Trump pivoted. He sent a series of messages to Iran’s supreme leader, Ayatollah Ali Khamenei, that all he really wants is to roll back what’s left of Tehran’s dormant nuclear program -- a shiny new Trump deal to replace the Obama-era deal he blew up.

So when limpet mines damaged two oil tankers in the Gulf of Oman and the Pentagon blamed Iran, Trump brushed the incident aside. “Very minor,” he said, adding that ships from Norway and Japan weren’t America’s problem.

When Iran shot down a US military drone last week, Trump again gave Khamenei the benefit of the doubt. “I would imagine it was a general or somebody who made a mistake,” he said.

And on Friday morning, the president tweeted that he had ordered retaliatory strikes on Iran, only to change his mind. “I am in no hurry,” he wrote. “Sanctions are biting … . Iran can NEVER have Nuclear Weapons, not against the USA, and not against the WORLD!”

These are not the words of a man with an itchy trigger finger.

Trump’s decision to abort the raid did not go down well with Republican hawks. Rep. Liz Cheney of Wyoming, a second-generation saber rattler, warned: “The failure to respond to this kind of direct provocation … (could) be a very serious mistake.”

But they shouldn’t have been surprised. Trump’s reluctance to use force, especially against an adversary that might retaliate, is beginning to look predictable.

In 2017 and 2018, the president ordered two missile strikes in Syria after Bashar Assad’s forces used chemical weapons against civilians. But Trump has not ordered further strikes despite persistent reports that Syria is still using poison gas.

In the summer of 2017, the president threatened to “totally destroy North Korea” with “fire and fury” if Kim Jong-un continued testing nuclear devices and long-range missiles that could strike the United States.

But once Kim suspended tests and agreed to a summit meeting, Trump reversed course cartoonishly. He praised the dictator he once derided as “little Rocket Man” as an up-and-coming statesman.

After their first meeting in Singapore last June, Trump declared that the nuclear threat from North Korea was “over.” (It’s not.) And as follow-up negotiations have hit roadblocks, he has continued to express confidence in his North Korean best friend. “I’m in no rush,” he said last week.

There’s a pattern here, and it might even add up to a “Trump Doctrine.”

The president hasn’t succeeded in carrying out his campaign promise to bring all US troops home from Afghanistan, Iraq and Syria, but he’s resisted starting any new wars.

His model for diplomacy is to threaten outsized punishments -- total destruction for Iran or North Korea, escalating tariffs for trade partners from China to Canada, and US withdrawal from NATO if alliance members don’t increase their defense budgets -- but back down if his threats produce negotiations.

His main goal, it seems, is merely to produce a deal he can portray as a win. He’s consistently overstated the fruits of his talks with Kim. After all, North Korea’s production of nuclear material hasn’t stopped. And he’s exaggerated the impact of his trade deals. His new US-Mexico-Canada agreement is only a modest update of the North American Free Trade Agreement -- NAFTA, the pact he denounced as the worst deal ever.

The “Trump Doctrine” may come down to this: The United States is stronger than we think, other countries are weaker than they admit, and if we throw our weight around, we can always get our way.

It’s a beguiling theory, but it comes with two flaws.

One is that it leads Trump to bludgeon long-standing US allies, and that weakens vitally important relationships that the United States needs.

The other is that Trump’s strategy doesn’t always work -- and he appears to have no fallback strategy if it fails.

Kim has strung along the president with flowery, flattering love letters. But what happens when it becomes clear that North Korea has no intention of dismantling its nuclear arsenal?

Iran’s Khamenei, an 80-year-old theologian, refuses to stoop to flattery; he says he sees no reason to talk with Trump. What happens if Iran refuses to back down?

Trump’s record suggests that the answer won’t be military action. If there’s an impasse, he’s more likely to try to spin his way out -- to declare victory and move on.

His policy is still a destructive, incoherent mess. But scoff all you like about his self-declared title as the world’s greatest deal maker. Having a president who prefers negotiations to war is not a bad thing.