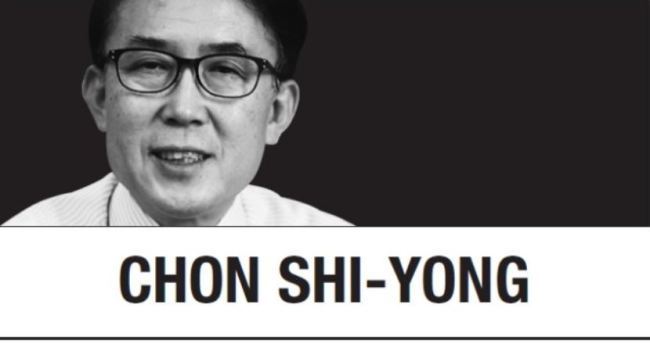 He reaffirmed that confidence in a meeting last week with a group of senior editors from the Asia News Network, a coalition of 24 leading media organizations from 20 countries across Asia. The Korea Herald is a member of the group, which celebrated its 20th anniversary in Seoul last Friday.

In the meeting, held Thursday at Cheong Wa Dae, Moon said he would seek to meet Kim “as soon as possible” and facilitate a third meeting between Kim and Trump.

The president’s eagerness to revive the momentum for dialogue on denuclearization, which has been on hiatus since the second meeting between Kim and Trump in Hanoi fell through in February, was not surprising.

But while Moon was meeting the ANN editors, Kim was making his first-ever visit to Russia to enlist Vladimir Putin’s support for his demand that the US lift some sanctions in exchange for partial denuclearization steps. Moon’s “timely” comments on the North Korean issue drew media and public attention to his meeting with the ANN editors.

Moon said his confidence was based on what he had achieved so far.

“We have seen remarkable changes in the last year. Just 18 months ago, there was much tension on the peninsula and genuine concern about the outbreak of war,” he said.

As things stand, the liberal South Korean leader’s reconciliatory approach toward the North, which he inherited from the late presidents Kim Dae-jung and Roh Moo-hyun, faces backlash from critics at home and abroad.

But the undeniable fact is that the three inter-Korean summits within a span of five months and the two Kim-Trump meetings dispelled the fear of war.

It was against this backdrop that ANN named Moon Person of the Year last year. In announcing the award, ANN said he “single-handedly disarmed the powder keg that had been primed.”

In the Cheong Wa Dae meeting, the ANN editors expressed the hope that Moon would continue his efforts to resolve the North Korean issue through diplomacy and to improve inter-Korean relations and US-North ties.

He suggested the possibility of recognizing North Korea as an ASEAN dialogue partner and inviting Kim to the Korea-ASEAN summit scheduled for November in Busan.

Moon also mentioned his New Southern Policy and New Northern Policy, which aims to improve ties with countries to the north and northwest of South Korea. The fruits of those policy initiatives, Moon said, would include greater peace and prosperity for the whole of Asia, as well as the Eurasian region.

In general, Moon’s focus on foreign affairs was well received by my fellow ANN editors. One participant told me after the Cheong Wa Dae meeting that he thought Moon could make a good brand ambassador for a new outward-looking South Korea if he avoided becoming too bogged down on North Korea and domestic issues.

Listening to that colleague, I couldn’t help thinking of how few South Korean leaders had made any noteworthy foreign policy achievements.

One who deserves relatively good grades, in my view, is former President Roh Tae-woo, whose term of office was 1988-1993 and who promoted “Nordpolitik,” or northern policy. That policy, designed to improve relations with communist countries, resulted in China and Soviet-bloc countries taking part in the 1988 Seoul Olympics, and ultimately led to the normalization of relations between those countries and South Korea.

The late President Kim Dae-jung’s “Sunshine Policy” of engaging North Korea, which led to his historic summit with North Korean leader Kim Jong-il in 2000 and landed him the Nobel Peace Prize, can also be considered a noteworthy foreign policy achievement.

Only time will tell whether Moon’s foreign policy initiatives toward North Korea and other Asian countries will be on a par with the accomplishments of Kim Dae-jung and Roh Tae-woo. The key determiner, of course, will be the outcome of the peace process on the Korean Peninsula and the denuclearization of North Korea at the end of his term in three years’ time.


Chon Shi-yong
Chon Shi-yong is The Korea Herald’s chief editorial writer. He can be reached at sychon@heraldcorp.com. -- Ed.