But Lee Jeong-beom’s upcoming crime film “Jo Pil-ho: The Dawning Rage” takes it to another level, replacing character development with cliches and corny dialogue while tying in one of the biggest tragedies in the country’s recent memory to no clear point.

The film kicks off when Jo Pil-ho (Lee Sun-kyun), a corrupt police officer, is embroiled in an explosion at a police storage unit he was supposed to have robbed. As the sole survivor, he is blamed for the incident and the death of the only other man present at the unit, Han Gi-cheol (Jeong Ga-ram), who turns out to have been killed at the scene before the blast.

Jo soon realizes that right before his death, Han had shown definitive evidence of corruption against one of the biggest conglomerates in the country -- sending one piece to Jo and another to a high school girl named Mi-na (Jeon So-mi).

But tracking down the girl and confronting her only sends Jo further down the rabbit hole, as the corrupt police officer comes face to face with people much worse than himself.

Despite what the film has done with most of its characters, Lee Sun-kyun as the lead was not bad at all. It was what I expected from the actor -- the face, the voice, the devil-may-care attitude of the morally bankrupt, and even moments of comedy worked well at times.

Of course, he is not that “evil,” aside from the obvious corruption. His foul mouth and his tendency to retaliate against those who have wronged him make him more of a Samuel L. Jackson than a “bad cop.” But he is fun to watch. I also loved that the film didn’t give him a backstory to explain how he had fallen from grace.

As demonstrated in his previous film, “The Man from Nowhere,” Lee can create a protagonist who demands attention.

As for the supporting cast, Lee did show his tendency to use cliched characters in “The Man From Nowhere,” but that film had a relatively straightforward structure and a style that fit the tone of the movie. It also had good chemistry between the two leads, whose presence held up the film even when they weren’t sharing screen time.

Not here, though. The bad guys are even more pretentious and corny than ever before.

I used to think Song Yeong-chang -- who plays an evil rich guy in this film -- was a seasoned actor who could be relied on in any role, big or small. But seeing him tank here made me question my evaluation. There is a difference between a menacing look and an “evil cackle.” And uttering threats only works with solidly developed characters.

Speaking of a supposed-to-be-scary-but-not-even-a-little-bit character, I see where the director was going with Park Hae-jun as the henchman, but it just doesn’t work. His first scene involves threatening a technician with “maniacal laughter” and “unpredictability,” but he hasn’t really earned the reputation to scare us yet.

In Christopher Nolan’s “The Dark Knight,” the infamous Joker is built up even before his appearance. We can feel what he is like from the way others talk about him -- we know what he is planning, so when he finally makes an appearance he can scare us with the slightest gesture. That’s character development.

On the contrary, this flick expects us to feel threatened just because of his cliched character traits. And the speeches and corny dialogue don’t help either. 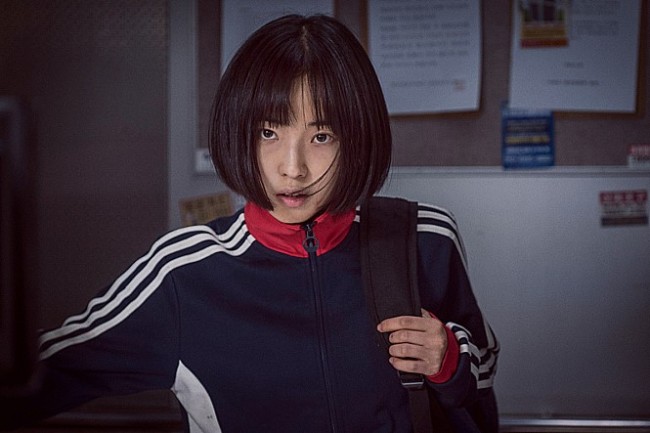 In my perspective, the film actually had a way out. Young actress Jeon So-nee as a clearly broken high school kid had heart and character, and even chemistry with Jo Pil-ho that led to both meaningful and lighthearted moments.

The film should have focused on what it had: two good leads who worked well together. While it does that for the second act, the plot goes all over the place for the rest of the runtime, losing focus and talking about things that are frankly not that interesting.

It goes without saying in Lee Jeong-beom movies, but the action is really good, which I think is another point the director should have focused on more. Even though I found the henchman character laughably nonthreatening, I couldn’t help but think, “Man, this guy can kick ass.”

Some of the humor works too, particularly between the two leads.

The ending is confusing in all the wrong ways. It is a movie that makes you go, “Hmm?” instead of “Hmm … ”

For all the reasons mentioned above, it’s a subpar film. But cramming in the Sewol disaster, which took the lives of 250 students from Danwon High School, makes it a bad one. In a press premiere, Lee said he’d shown the film to the bereaved families of the victims and one of the fathers had told him “the reality was much more violent and brutal.”

In the film, there is one scene where a man who lost his daughter in the tragedy tries to commit suicide, and the cops stop him. The moment when the father cries out at the injustice of it all is heartbreaking, as is the haunting image of the Danwon High School classrooms preserved as a shrine for the victims.

But that was about it. The film was not about Sewol. Mi-na’s friend, the suicidal man’s daughter, could have died in a car crash and everything else would have been exactly the same.

Sewol is a tragedy purely on the number of lives lost, but even more so because the lackluster rescue effort and incomprehensible lack of morality torment the rest of us, making us ask, “Could more people have survived if only … ?”

The film deals with none of that, just the fact a young girl died way before her time. In other words, the Sewol tragedy is a plot device to introduce a dead friend. And that does not feel right.

Sewol was no mere accident. The film doesn’t really dive into the gravity of the tragedy, how misconduct by those in authority made it even more tragic. Why, for years, the bereaved families have demanded an in-depth investigation to uncover the ugly truth. Or even about how losing a child can tear someone’s life apart: One mother of a girl who died in the Sewol tragedy suffered a hearing loss as a result of the shock.

But even if that were taken out of the equation, "Jo Pil-ho: The Dawning Rage" is not a well-made film, which makes my job easier.

* Official English title of the film has been changed by its distributor from "Bad lieutenant."