With rise of online banking, number of bank employees in Korea drops 9.2% over two years

By Sohn Ji-young
Published : Mar 13, 2019 - 15:36       Updated : Mar 13, 2019 - 16:11
The number of employees in South Korea’s banking-finance industry declined 4 percent over a recent two-year period, in part due to the latest expansion of internet-based banking services, according to new industry tracking data released Wednesday.

According to local corporate tracking firm CEO Score, the number of employees working at Korea’s top 56 finance companies ranked by net capital stood at 153,195 as of the third quarter of last year.

This marks a 4 percent decline from 159,573 employees recorded two years earlier, during the third quarter of 2016, according to the tracking data. 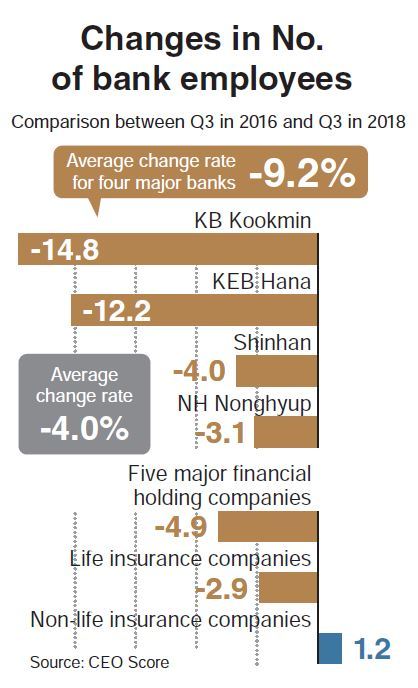 The decline was attributed mainly to the rapid expansion of online banking and phone banking services in recent years, which prompted many banks to cut down on junior-level staff numbers and to close many offline branches.

During the two-year period, the number of people working at the five banks declined by 5,726 people, reflecting a 9.2 percent decline.

On the other hand, the number of employees working in the non-life insurance sector, securities brokerage firms and savings banks increased during the two-year time frame.

“The decline in the number of employees working at local banks, banking groups and life insurance companies is explained by the expansion of internet-based banking services and the closing down of offline bank branches,” CEO Score said in a statement.

“The non-life insurance, securities and savings bank sectors saw a slight expansion of their workforce numbers, affected by contributions from short-term insurance packages, a strong stock market and the adoption of new guidelines on credit evaluation.”