[Hal Brands] Trump is right on Venezuela, but it may end badly 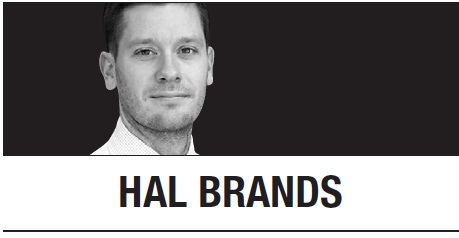 Donald Trump almost certainly doesn’t want to invade Venezuela. Despite ominous official statements about keeping all options on the table, a president who has repeatedly announced his intent to end America’s “endless wars” is presumably not itching to start another messy military conflict.

Instead, the administration is pursuing a strategy that blends coercive diplomacy with brinksmanship in an effort to break Nicolas Maduro’s hold on power. That strategy represents a fairly reasonable approach to addressing an intensifying moral, diplomatic and geopolitical crisis. But it also comes with risks that are themselves intensifying.

The idea that Trump may use force to achieve regime change has been fostered by the administration’s repeated refusal to rule out military options, and also by an episode in which national security adviser John Bolton “accidentally” revealed that the administration was considering dispatching an additional 5,000 troops to neighboring Colombia.

All this has led some commentators to warn that Washington may be headed for a military adventure in South America. In reality, there is little to suggest that the administration is actually planning a military intervention aimed at toppling Maduro. The Defense Department has rightly emphasized the imperative of focusing on great-power competition, and would presumably be strongly opposed to any significant American commitment in Venezuela. Rather, the threats and ominous hints are best seen as part of a strategy for squeezing the regime -- and ultimately toppling it by inducing the Venezuelan military to switch sides.

The Trump administration understands that the military is the crucial swing vote in the Venezuelan political system. Accordingly, the administration has been working with the Venezuelan opposition, led by self-declared interim President Juan Guaido, to sway the loyalties of the armed forces through the use of carrots and sticks.

Guaido has promised Venezuelan military officials amnesty for crimes committed under the governments of Maduro and Hugo Chavez, so long as they desert the regime. At the same time, the US has imposed targeted economic sanctions on high-ranking military leaders, to demonstrate that those who support Venezuela’s dictator will endanger their own livelihoods. In late January, Trump imposed broad sanctions on the Venezuelan oil industry to starve Maduro’s attempts to buy off the high command. The US and dozens of other countries have generated additional pressure by stripping away the regime’s diplomatic legitimacy and recognizing Guaido’s authority.

Finally, Trump’s team has threatened that more drastic measures may be forthcoming, and it has sought to put the Venezuelan military in situations where it must choose between firing on civilians and breaking with Maduro’s government.

The Trump administration deserves some credit for putting this strategy together. It was becoming morally untenable and strategically problematic for the US not to be working harder to push Maduro out the door, given the spiraling humanitarian crisis and opportunities for geopolitical mischief created by the regime. Washington is certainly right that any strategy for restoring democracy in Venezuela must focus on “turning” the military.

First, the Trump administration has put more of an American face on the crisis than might be desirable. This is admittedly a hard balance to strike. US leadership is important in mobilizing regional and international condemnation of the regime.

Yet the administration reportedly made a mistake by jumping the queue in recognizing Guaido in January. US recognition was apparently meant to follow a similar move by 13 Latin American countries, allowing them to have leadership of this diplomatic departure. Instead, US recognition preceded the Latin American move, fostering the impression that Washington was pulling the strings. And by making its opposition to Venezuelan “socialism” so prominent, by issuing implied military threats to the regime, the administration runs the risk of turning the crisis into a showdown between Maduro and the US, rather than between Maduro and the people he is oppressing.

Second, Trump’s strategy may make things worse, at least in the near term. Oil sanctions will accelerate the decline of the Venezuelan economy, leading to greater human suffering that the regime will blame on the US. Because the top levels of the military are tightly bound to Maduro, moreover, US pressure could conceivably lead to lower-level defections, raising the risk of civil war.

Finally, there are risks related to brinksmanship. This is the least well-considered part of Trump’s strategy. It probably adds only marginally to the pressure campaign, because the threat of military intervention does not seem particularly credible. Yet it still creates the perception of the US as a trigger-happy superpower. It could also create a trap: If Maduro refuses to step down, or the military does not break with him, the Trump administration would then be presented with a choice between escalating pressure further and tacitly acknowledging that it was bluffing all along.

Rhetorical brinksmanship is a favored tactic of this president, who believes that it gives him leverage in international disputes. Yet brinksmanship also puts American prestige and credibility on the line -- and it can backfire if the president’s bluff is called.