[Yoon Young-kwan] How to judge the Hanoi summit 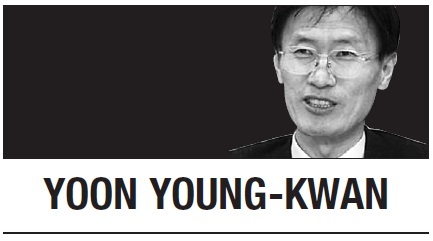 US President Donald Trump and North Korean leader Kim Jong-un met in Hanoi, Vietnam, Wednesday and Thursday for their second summit. In assessing the outcome, optimists and pessimists alike should focus on three criteria: irreversible progress toward a formal peace settlement, denuclearization, and the potential transformation of the North Korean regime.

In retrospect, if the unsuccessful diplomacy of the past 25 years has taught us anything, it is that denuclearization will not happen without first ending the hostility between the United States and North Korea. A policy of pressure and deterrence without political engagement has been shown to breed distrust and repeated defection by North Korea from agreements.

Fortunately, Trump and Kim have both signaled a willingness to move toward a more peaceful US-North Korean relationship, and there were reports before the Hanoi summit suggesting that Trump would offer Kim a formal declaration to end the Korean War. But full normalization will take time. After US national security adviser Henry Kissinger’s secret trip to Beijing in 1971, it took another eight years of diplomacy for the US to normalize its hostile relationship with China, with President Jimmy Carter granting the People’s Republic full diplomatic recognition in 1979.

Diplomacy with the Kim regime requires the same level of patience. At a minimum, a joint statement declaring an end to the Korean War would allow for US and North Korean liaison offices to be established in Pyongyang and Washington, respectively. That is no small matter.

Of course, there is much debate about the potential costs and benefits of a peace declaration, with some worrying that it would weaken the US alliance with South Korea. But as long as South Korea and the US share a vision for the future of their alliance, they can take steps to ensure that a peace declaration becomes a source of stability, rather than uncertainty. At almost seven decades old, the US-South Korea alliance is resilient enough to be able to adjust to the new international environment formed by a denuclearized and peaceful North Korea.

As for denuclearization, many expect that Kim will soon invite international inspectors to confirm that his regime has irreversibly dismantled the Punggye-ri nuclear test facility and the Tongchang-ri missile engine test site. Again, this would represent meaningful progress. But an even more important benchmark for success would be the decommissioning of the Yongbyon Nuclear Research Center. Some pundits have described this facility as decrepit and of no value. But a leading nuclear scientist who has visited Yongbyon four times told the Washington Post recently that he views it “as the heart of their nuclear program,” and “a big, big deal.”

Decommissioning Yongbyon under the supervision of international inspectors would set an important precedent for other hidden sites in the future. And Kim’s assent to a freeze on fissile-material production, and to a road map for future negotiations, would compel even pessimists to admit that the summit was a success, and that a more pragmatic US approach -- exchanging action for action -- had resulted in at least some progress toward denuclearization.

The final question is whether the North Korean regime itself is changing. Satisfying the first two criteria should create the conditions for Kim to move gradually toward a model of authoritarian-led development, as Vietnam or China has done. Whether he is actively considering such a transition is impossible to say. But it is worth noting that while Kim has not privatized the means of production, he has allowed for markets to play a much larger role in the North Korean economy than his father and grandfather ever did.

For example, the rise of the Donju, a class of nouveau riche “money masters,” has altered the dynamics of North Korea’s political economy and reshaped the relationship between the regime and the people. Kim Jong-il tried to suppress this new class with a failed currency reform in November 2009. But his son seems to have embraced it, either by choice or because internal political dynamics and increasingly harsh international sanctions forced his hand.

Looking ahead, much will depend on whether the US and other rich countries agree to help Kim become a development leader in the mold of Deng Xiaoping, the architect of China’s great “opening up” after 1978. If that is indeed the course Kim has charted, there is no good reason for the international community to stand in his way. Quite the contrary: We should be devising specific incentives to help him follow through with his plans.

To that end, one hopes that Trump will make the first move by offering a phased lifting of economic sanctions in exchange for genuine steps by the Kim regime toward denuclearization. Moreover, when loosening sanctions, exemptions for inter-Korean development projects should be at the top of the list.

In addition, multilateral financial institutions will need to instruct North Korean bureaucrats and students on the workings of international finance and a market economy. In fact, this is rather urgent, because without the requisite knowledge, North Korea’s economic transformation will never get off the ground. If the Hanoi summit includes an agreement to facilitate the exchange of information and expertise, so much the better.

But regardless of the summit’s outcome, it is time to adopt a broader, more comprehensive framework for assessing the results of US-North Korean diplomacy. If what happens in Hanoi is judged according to the criteria of the past, success may be mistaken for failure.