South Korea's ratio of tax burden to the gross domestic product will likely reach an all-time high of 19.6 percent next year on increased government spending, the finance ministry said Tuesday.

Government spending has been on a steady rise for years in a way to buttress Asia's fourth-largest economy suffering from faltering exports and sluggish domestic demand. 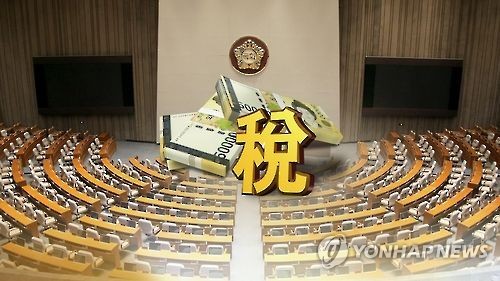 With the increase in government spending and tax revenue, the Ministry of Strategy and Finance said the national tax-to-GDP ratio will touch or top the earlier record of 18.9 percent, set in 2007, next year.

"On brisk tax collection, we see a record high in tax burden ratio," Deputy Finance Minister for tax and customs Choi Young-rok said in a briefing. "For the 2016 budget, the rate was 18.9 percent and it will gain an additional 0.5 or 0.6 percentage point, given the supplementary budget. And if we add provincial taxes collected, which will be compiled later, the figure would surpass the 19.4-19.5 percent range."

He explained that the rise in tax revenues is largely contributed by improved income from corporate tax and value-added tax.

Businesses posted some 30 percent rise in their operating profit for this year as a protracted economic slump discouraged them from making investments, with an increase in value-added tax coming from boosted private consumption.

A boom in the housing market also lent support to the tax revenue rise, he added.

The ministry said tax credits of up to 30 percent will be given to companies that make research and development investments in 11 selected new industries, such as smart cars, biomedical technologies and renewable energy.

Taxation on financial income will be tightened as those who have a stake of 1 percent or worth 1.5 billion won in a listed firm will be subject to a transfer gain tax, down from the current 2.5 billion won. The ceiling will be lowered to 1 billion won in 2020.

Starting from 2017, the transfer income tax will be also imposed on gains from the equity linked warrant, a derivative that gives holders the right to buy or sell at an earlier-set price and date.

Added-value taxes imposed on purchases by mileage points will be removed, while foreigners will get a refund of up to 5 million won, up from the current 2 million won, when they buy goods at tax refund shops.

The tax authorities will also reduce a tax write-off on company cars and business-related entertainment expenses given to family-run real estate agencies as they have been under fire for abusing the rule and using the company assets for personal purposes.

In order to promote fair competition, the government will put duty-free shop operators, which enjoy a market-dominating position, at a disadvantage when the authorities review their licenses every five years. (Yonhap)