The Seoul Metropolitan Government said Sunday that it temporarily closed the Seoul Grand Park in Gwacheon, just south of Seoul, over the weekend after it found two dead storks over consecutive days.

Authorities said it did not find anything significant from the autopsy results, while the examinations have been sent to the National Institute of Environmental Research for further investigation on the highly pathogenic H5N6 strain of the flu.

Reopening the zoo will be discussed following the result of the investigation, the authorities added.

Seoul City said that Seoul Children’s Grand Park in Gwangjin-gu will also be temporarily closed after the government raised its watch level from “alert” to “serious” last week, the highest vigilance level in the country‘s disease control system.

As a result, the Ministry of Agriculture, Food and Rural Affairs said that health authorities are entitled to close any chicken farm or cote if necessary. 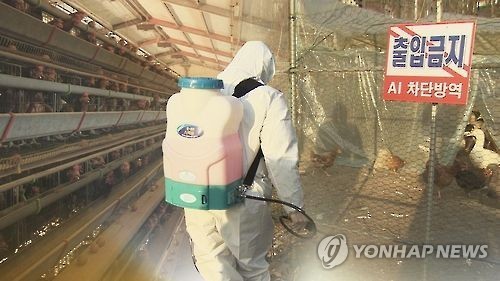 On Sunday, a chicken farm in Gimpo, Gyeonggi Province, was confirmed for H5N6 bird flu virus after it reported the deaths of chickens and unusual movements of ducks.

Quarantine authorities ordered the immediate ban on the movement of stockbreeders at poultry farms in the vicinity, as an examination into three other farms in the city is ongoing.

The current outbreak is already worse than that in 2014, when 13.96 million fowls were put down over six months.

A record number of 10 million chickens, ducks and quails have been culled throughout the nation so far, with an additional 3.78 million on the waiting list, since the bird flu was first reported in southern rural areas on Nov. 16.

The ministry expects the financial toll to reach 423.3 billion ($358.7 million) as the outbreak was uncontained in most of the disease-hit areas such as the Chungcheong provinces.

The infections were found to be the highly pathogenic H5N6 strain of the flu, a new type of the virus first detected in the country.

Quarantine authorities said migratory birds are a source of the highly contagious H5N6 virus, as there have been no reports of infections through the movement of people or livestock.

The latest outbreak came almost seven months after the last infection was reported in Gwangju, Gyeonggi Province, in April.