[WWF Special] Running out of Earth to live on

This is according to the ecological balance sheet, known as the Global Ecological Footprint Report, released by the World Wild Fund for Nature, Korea (WWF-Korea) and the Global Footprint Network.

The report shows that there is a significant imbalance between the Earth’s biocapacity and our ecological footprint. The mismanagement of resources is also spreading, with more people in “ecological debt.”

By Aug. 8, the world had used up all the natural resources that can be replenished in the year. It marked a day which environmental advocacy groups call “Earth Overshoot Day.”

For nearly half a century, humanity has been in such an ecological “overshoot,” and the amount of natural resources that can be replenished in a year are being used up quicker every year. 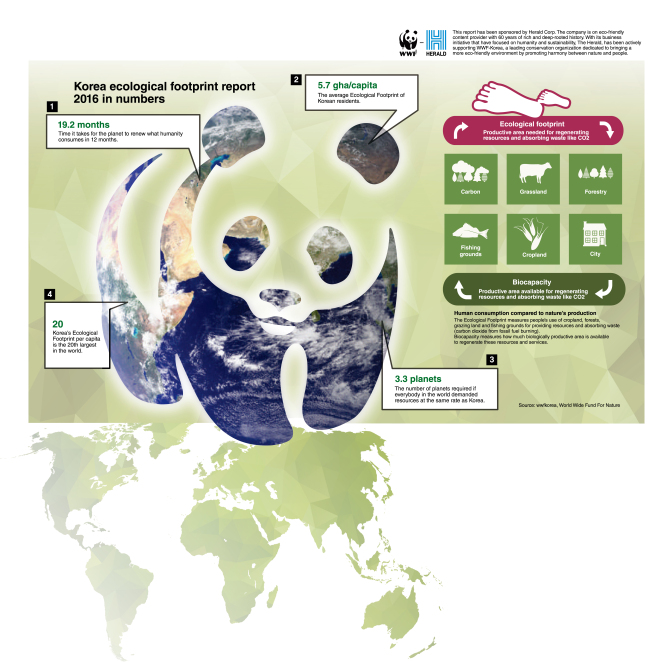 In dealing with this over-taxation of the Earth’s resources, humankind is borrowing from future capacity that cannot be regenerated, liquidating stocks of ecological resources and accumulating waste, primarily carbon dioxide, in the atmosphere.

People tend to have a lifestyle that wastes resources and exacerbates their ecological footprint. For instance, 30 percent of food was wasted worldwide in 2013, and there remains a heavy use of coal and natural gas for power.

This lifestyle has resulted in depleted fisheries, deforestation, biodiversity loss and climate change, according to the WWF-Korea and the GFN.

In Asia-Pacific, the demands placed on biocapacity now exceed the area’s supply by 150 percent. In other words, 2.5 planets are needed to make up for the amount of damage being done.

Korea’s record is even worse. The small peninsular with the world’s 58th largest total biocapacity, demands eight times more from nature than the ecosystems within its borders can replenish, making the country the 14th-largest country in terms of ecological footprint. If everyone in the world demanded resources at the same rate as Korea, they would need 3.3 more planets.

WWF-Korea and GFN warned that this lifestyle should be altered and said that people need to build economies that fit within the budget of one planet.

In response to a lack of resources, countries look beyond their borders, leading to escalating competition among nations that need to compensate their overuse. 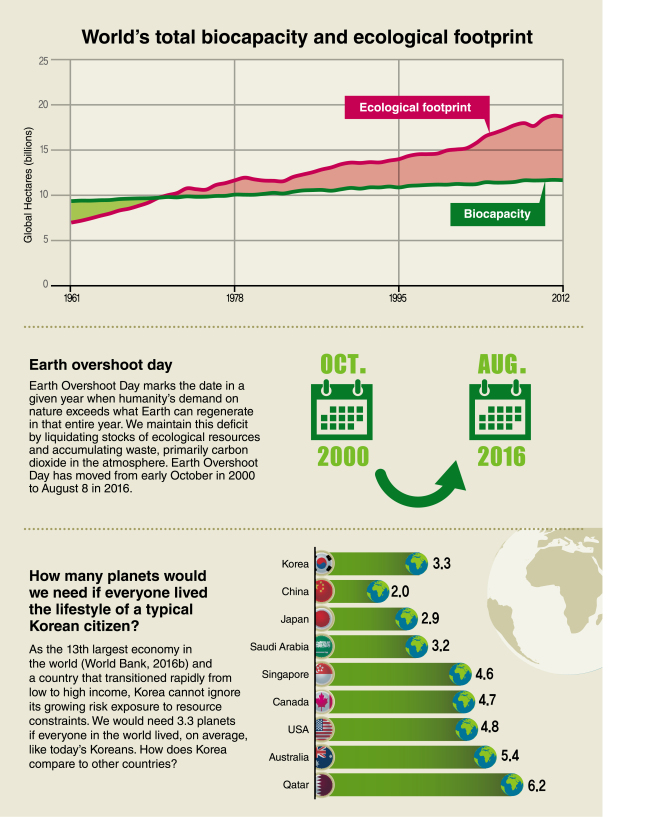 As for Korea, its key trade partners such as the US, China and Japan -- all within the top five nations with the largest ecological footprint -- are also suffering from ecological debt.

But there has been rising global awareness to prevent the looming catastrophe.

In 2015, more than 190 countries including South Korea signed the historic Paris Climate Change Agreement, joining forces to cut carbon emissions which account for 60 percent of the ecological footprint.

But the WWF-Korea said there is still a long way to go, considering it was over 40 years ago that humanity’s demands were at a level at which the planet could replenish

WWF-Korea emphasized that it is possible for a country’s economy to grow without an increase in its ecological footprint, such as by transitioning to renewable energy and having individuals make choices that can lower carbon emissions. However, it is not sustainably possible to continue a lavish lifestyle as if there is more than one Earth.