In Seoul, however, media art installations and exhibitions have replaced the sparkling Christmas decorations, illuminating the city’s bleak midwinter and offering people the opportunity to enjoy some contemporary art.

At the grand front entrance of the Sejong Center for the Performing Arts in Gwanghwamun, a huge screen has been set up to run media art pieces by Lee Yong-baek, whose works were featured in the Korean Pavilion exhibition at the 2011 Venice Biennale, and Matt Pyke, founder of the art studio Universal Everything.

Dynamic images of “The Collection for I” by Lee and “We Are All Unique,” “Running Man,” “Made by Humans” series by Pyke are playing on the 23-meter-wide screen for about four hours at night. The show begins 30 minutes after sunset until 11 p.m. daily.

Hyundai Motor Company, which is sponsoring the outdoor media art show, plans to showcase these works at Times Square in New York and Piccadilly Circus in London. 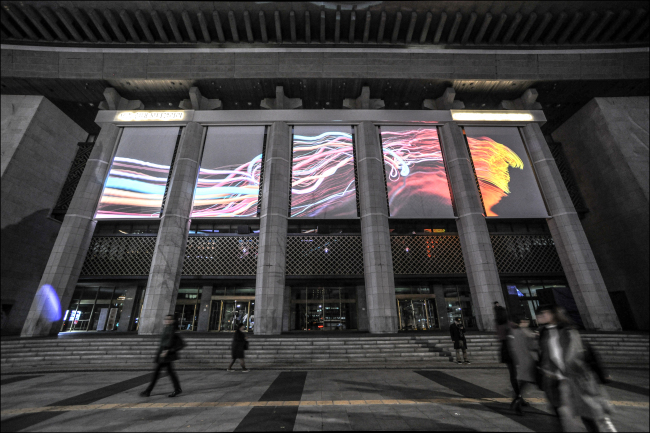 "Made by Humans: Mobius" by Matt Pyke runs on the screen installed at the Sejong Center for the Performing Arts facade in Gwanghwamun, Seoul. (SCPA)
The former Seoul Station, which now houses the multicultural space Culture Station Seoul 284, has been transformed into a giant canvas for some 400 masterpieces by impressionist masters such as Vincent Van Gogh, Claude Monet and Pierre-Auguste Renoir.

The paintings have been transformed into moving images and are projected through full HD projectors onto the dome, ceilings, floors and walls of the historic train station that was built in 1925.

“This is the biggest media art exhibition in Korea that covers the entire space of the 1,652-square-meter former train station,” said Ji Seong-wook, head of Media N Art, the exhibition organizer.

The four main zones follow the artistic footsteps of Van Gogh, displaying images of paintings made during his critical artistic periods in Paris, Arles, Saint-Remy, Auvers-sur-Oise and other places. Works of other impressionist painters are being displayed in the lobby.

The viewing experience is intensified with instrumental background music that is composed for the show to enhance the soothing and calming mood of impressionist landscape paintings. Each show lasts for around eight to 12 minutes.

The exhibition also offers an immersive experience for visitors. They can revisit Van Gogh’s “The Night Cafe” through virtual reality. By wearing virtual reality gear, they enter a space with tables and chairs and walk around, traveling back in time to the 19th century French cafe.

Viewers can also view places featured in Van Gogh’s landscape paintings by holding up special tablets in front of present-day photos of the places.

Prices for the exhibition ranges from 8,000 won ($6.70) for children to 15,000 won for adults. The exhibition is until April 17. For more information, visit www.vangoghinside.com.