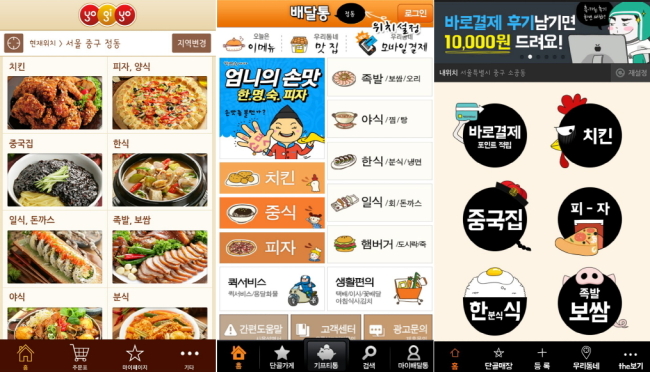 South Korean students, office workers, singles and especially those who find it frustrating to stand in queues see home-delivered food as a blessing. Only a couple of years ago, they used to reach for flyers to place an order. Now, things have become smarter.

Suh Jeng-hoon, for instance, is a student who enjoys food delivery and uses mobile apps specializing in this to read reviews, browse menus, check restaurant locations and even place orders.

Like Suh, a growing number of Korean consumers prefer to check smartphone apps when they want to order food from home.

“I look for food delivery when I have no time to go outside. I can save at least half an hour by having food delivered and I can rest in the meantime,” said Youn So-jin, a 30-year-old researcher.

Most app-based food delivery services locate restaurants by proximity, popularity and review rate, and give an estimate of the time it would take to arrive in real time after an order is placed. In the app, wide culinary choices are provided from compiled data taken from flyers.

Delivery services have expanded here as restaurants seek to carve out a share in the niche market targeting those who work long hours and sleep late. The app providers said the habit of ordering food through smartphones will gradually take hold in the country where 73 percent of people use the devices. The growth potential of the market is considerable, they said, similar to the boom in social commerce in recent years.

Overall spending on food in South Korea is estimated at around 50 trillion won ($47 billion), of which 10 trillion won is spent on food delivery. Na Je-won, CEO of online food courier service Yogiyo, said, “The industry is gaining momentum, but we believe only 5 percent of customers are placing orders through the app at the moment. More people will become regular customers when they realize how convenient and user-friendly it is.”

More than 70 apps are competing in the food delivery service category, and three apps stand out as frontrunners: Baedal Minjok, Baedal Tong and Yogiyo. The Baedal Minjok app has pulled about 8 million downloads since its rollout in 2010, becoming a favorite app in the category. Yogiyo, launched in 2012, is also making headway by placing TV ads.

Food courier apps are expanding in other countries, as well, even where ordering home-delivered food is new. With more customers ordering food via apps, platforms such as Delivery Hero in Europe, GrubHub in the U.S. and Foodpanda are drawing fans around the world.

“A flyer cannot give us information anymore. It only contributes to generating rubbish these days,” said Hwang Tae-yeon, a student who often uses food delivery service apps.

The 28-year-old student prefers the location-based apps to a pile of printed materials because flyers are easily lost and provide only a list of local restaurants.

“I can find the best delivery restaurants through apps even in a strange town,” Hwang added.

It doesn’t seem the delivery market will go paperless anytime soon, however. Despite the adoption of delivery apps, a flyer still serves as a crucial advertising tool, especially for certain age groups.

“Those who are in their 20s and 30s prefer apps, but a flyer can appeal to people over 40 or those who live outside Seoul. Apps and flyers have different features, so flyers will not be completely wiped out,” said Choi Woong, who has run a chicken restaurant in the Gangnam area for nearly 10 years.

With the explosion of smartphones and tablet computers, mobile apps are spurring the paradigm shift in delivery culture at home and abroad.

It may be difficult to get people to break old habits, but Yogiyo’s Na said he’s confident that mobile apps will become a prevailing platform for those who seek food delivery.

“Who could have imagined that people would buy clothes online in the 21st century? I think it would be the same for mobile apps,” Na said.

By Yoon Ha-youn and Ock Hyun-ju