What is behind South Korea’s growth in soft power? 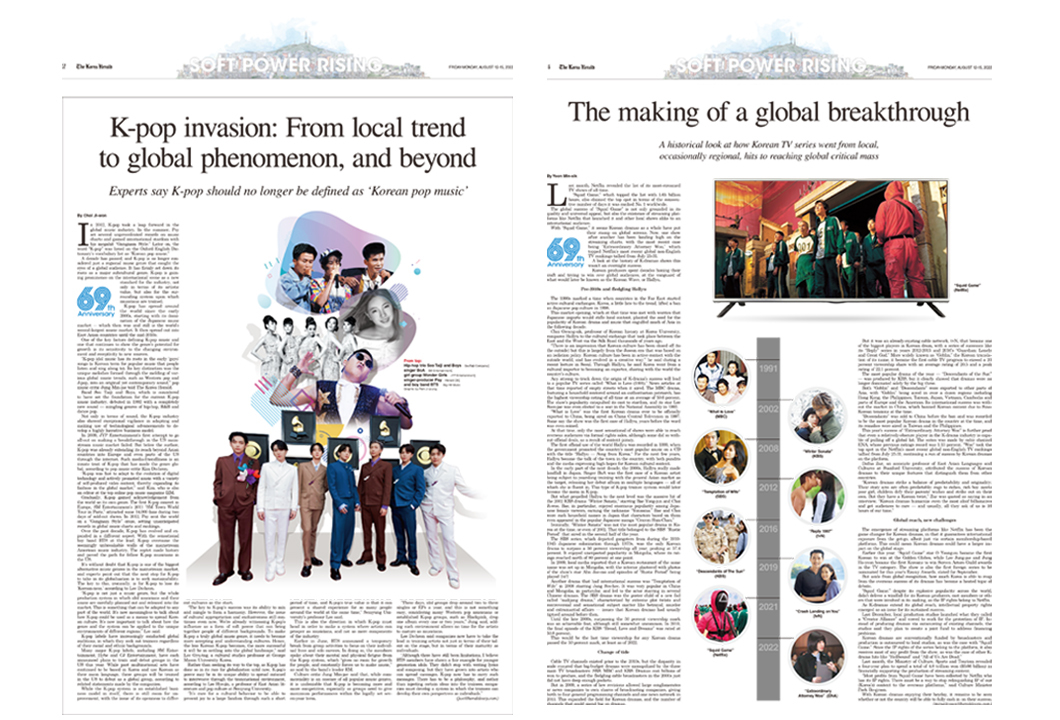 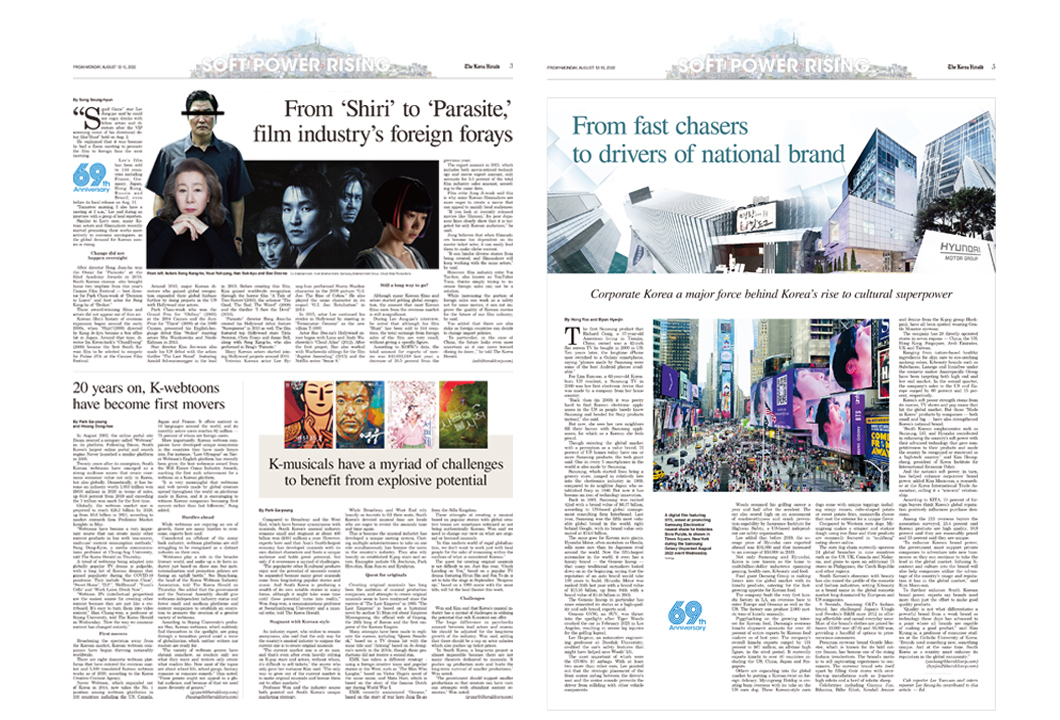 Since the turn of the 21st century, South Korean pop culture has grown in prominence to become a major export driver in entertainment, music, TV dramas and movies, strengthening its soft power and cultural diplomacy in addition to economic gains.

On Netflix, a string of original Korean-produced content such as “Squid Game,” “Hellbound” and “Extraordinary Attorney Woo” have become megahits.

The film “Parasite” won four awards, including the Academy Award for best picture last year, and “Decision to Leave” won the director’s award at the Cannes Film Festival this year.

Global boy band BTS’ music video “Boy With Luv” has garnered over 1.5 billion views on YouTube as of this month.

With the global popularity of Korean culture, Korea is ranked at the top in multiple measures of soft power. The nation ranked 12th in Brand Finance’s Global Soft Power 2022, second in Monocle’s Soft Power Survey 2020 and 19th in Portland’s Soft Power 30 Report 2019. Soft power, a term coined by American political scientist Joseph Nye in the late 1980s, refers to “the ability to obtain preferred outcomes by attraction rather than coercion or payment.” According to the Oxford Dictionary, soft power involves “the use of economic or cultural influence rather than military power.”

“They (Korean content producers) are good at making content of universal concern in a sophisticated and attractive manner,” said Shin Gi-wook, a sociology professor at Stanford University and director of the Walter H. Shorenstein Asia-Pacific Research Center.

“In its early stages, Hallyu resonated with a primarily Asian audience, including those in Japan and China. In its present form, however, K-culture resonates with a global audience,” Shin said.

“Following the 2007–2009 Great Recession, people worldwide contended with problems such as extreme inequality, refugee crises, and a hypercompetitive society. Korea’s artists skillfully dissected these issues,” he said, referring to “Parasite” and “Squid Game,” which show inequality in society and portray realistic issues related to capitalism.

The characteristics of Korean content differ from the dichotomy between good and evil prevalent in Hollywood movies, which leads the global cultural content market.

Korean content is marked by themes of breaking away from oppression, perseverance under difficult circumstances and the pursuit of freedom. These are related to its modern history, full of invasions, colonization and oppression. Along with economic growth, cultural maturity and the creation of a freer social environment, these themes were expressed as unique characteristics of the Korean Wave and led to the formation of a global consensus, according to a report written by analyst Han Sang-woung of Eugene Investment & Securities.

The popularity of K-pop is different from that of K-dramas or movies.

The core of the system that created the rapid growth of K-pop, the center of the Korean Wave, is the “idol system.” In Korea’s idol system, management companies select trainees and put them through rigorous training that span singing, dancing and acting.

Idol stars’ paths are systematically planned from the trainee stage, and by the time they debut, they are finely tuned for the entertainment industry.

These artists, who put in countless hours of practice from a young age, are capable of stunning group performances.

“Combining this element with music seized the attention of fans across the globe. Such group performances are difficult to envision among artists in Western societies, and authoritarian countries such as China or North Korea may be capable of mass choreography, but only for political purposes.”

It is undeniable that South Korea’s soft power has been growing, but there are also doubts about whether this phenomenon will be sustainable in the future.

On the day BTS announced a temporary suspension of group activities, the members spoke about their struggles within the factory-like K-pop system, which brought the industry’s problems to the surface.

During the band’s announcement, BTS leader RM said, “The problem with K-pop and the whole idol system is that it doesn’t give you time to mature (as a person),” adding, “If I say I want to rest, I think I’m doing something wrong because I’m afraid (fans) will hate us. The members said ‘I’m sorry’ several times just so they can say they are taking a break.”

Many idols also face extreme monitoring from their companies, in the form of dating bans, extreme diets and the infamous long-term unpaid trainee system, causing side effects to their mental health such as depression and panic disorders. Some have even committed suicide as a result.

Korea’s pop culture is geared toward practicality and commercial motives, lacking depth and deep ideas on improving human nature, which is the essence of culture, said Kim Woo-chang, an honorary professor at Korea University’s department of English language and literature.

“Does the Korean Wave contribute greatly to the development of human culture? No,” he said.

“They give pleasure, but it is questionable whether it improves psychological value, as we saw from Franz Peter Schubert or Wolfgang Amadeus Mozart,” he said. Cultural development that delights many people is important, but it is not the highest level of culture, he added.

“All societies and human cultures have developed materially, but at the same time, without psychological development, society cannot achieve long-term progress,” he said.


In commemoration of The Korea Herald’s 69th anniversary on Aug. 15, The Korea Herald has prepared a series of features delving into the phenomenon of Korean-made content influencing global contemporary culture and trends. Is it a one-off occurrence or is it here to stay? Can South Korea claim pride in the works of its creative minds as a nation? The Korea Herald expounds on the past and present of the Korean Wave and its prospects for the future. – Ed.