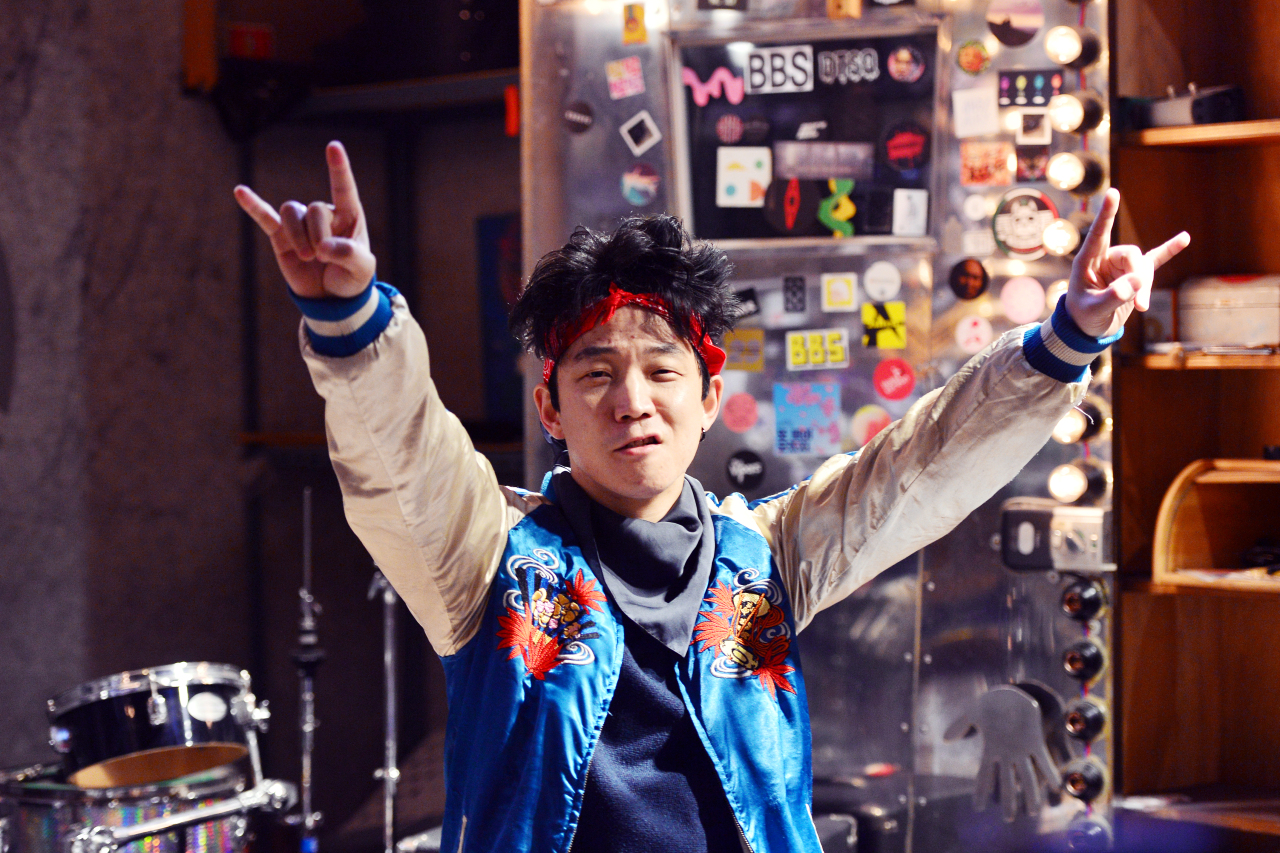 Han Kyung-rock of Crying Nut poses before an interview with The Korea Herald at Jebi Dabang in Seoul, Jan 24. Park Hyun-koo/The Korea Herald
How many people can claim to have an entire festival dedicated to their birthday, and while they are still living to boot?

Since 2005, rocker Han Kyung-rock, the bassist of iconic punk band Crying Nut, who is also known as Captain Rock, has been celebrating his birthday by hosting a large party in the Hongdae area of Seoul, a notorious center for indie music.

Held every year on Feb. 11, Han’s birthday, what started out as a gathering of fellow musicians for drunken revelry and impromptu performances has evolved into “Kyungrockjeol,” labeled as one of the three big Hongdae holidays, alongside Christmas Eve and Halloween.

“The event moved online last year due to the COVID pandemic,” Han said in an interview with The Korea Herald on Jan. 24 at Jebi Dabang, a cafe-bar-performance hall in Sangsu-dong, Seoul.

“Before (the pandemic), we would have musician friends and some 700-800 people get together for performances and drinks. It was like a festival, a time for having some fun over drinks,” he said. In 2016, the annual festival moved to Muv Hall, one of the largest venues in Hongdae. Muv Hall fell victim to COVID-19, shutting down for good last year as several rounds of restrictions against concerts and clubs were imposed.

Last year’s online Kyunrockjeol ended up setting a record of sorts -- 18 hours and one minute of continuous livestreaming of performances by 83 groups. Among the foreign acts participating in the online show was Glen Matlock of the Sex Pistols.

“This year as well, we have no choice but to hold an online festival,” Han said. It will be a three-day festival starting Wednesday, and is scheduled to feature about 100 artists.

The success of last year’s event owes largely to Han’s very broad network of musician friends and colleagues. It was not at all difficult to enlist the musicians, most of them among the who‘s who of the indie music scene in Korea, according to Han.

“It isn’t easy to organize an online festival on short notice. But we indie musicians have this spirit. We don’t think of a new challenge as a very difficult thing. We say, ‘Hey, should we give it a try?,’” said Han.

The 83 indie groups performed live from wherever they were and some prerecorded their performances at various clubs in Hongdae. As befits the title of the first-ever online edition, “Kyungrockjeol in the House,” some artists cooked, some did mukbang and yet others offered a book review. There was even a drinking yoga session.

“Park Jae-beom did karaoke in a moving car!” said Han. “People liked watching the musicians go about everyday life,” Han added. “Perhaps that is yet another draw of online Kyungrockjeol.”

Taking the festival online last year, Han learned firsthand the possibilities of expanding the audience across time and space in the online world. I suggested that he had succeeded on this front, telling him how I watched the show last year while preparing food for the Seollal family gathering the following morning. It was a perfect antidote to the tedium of mindlessly flipping enough jeon to feed 10 people twice over, and I continued to watch the show well after I was done cooking, glad to catch up on bands that I had known in the past and excited to discover new ones. I could not imagine being part of Kyungrockjeol had it not taken place online, I told him.

For this year’s Kyunrockjeol, themed “For Pure Pleasure Only,” Han has assembled a motley cast of artists, including idols, gugak artists, punk rock bands, folk musicians. “A good thing about online is that it is relatively easy to gather everyone in one place,” Han said.

“We took applications from indie groups, colleagues and teams that wanted to participate. There were groups that I didn’t know and newcomers as well, so I selected teams that fit the purpose of the festival,” Han said. He personally contacted colleagues that he knew as well as veteran musicians, who readily agreed to participate, Han recalled.

A surprise among this year’s lineup is one of the hottest dance crews in Korea today. “We have Cocaine Butter (now known as CocaNButter) from the hit TV show ‘Street Woman Fighter,’” said Han. The greatly expanded range of performers is aimed at attracting a greater number of people to the festival, according to Han.

It is a virtuous cycle: Viewers will enjoy performances by their favorites, but at the same time, while waiting for them to come on, will end up watching others as well. They might then discover find someone new to their liking. “I think this is how this culture becomes richer and more diverse in a spontaneous manner,” Han said. 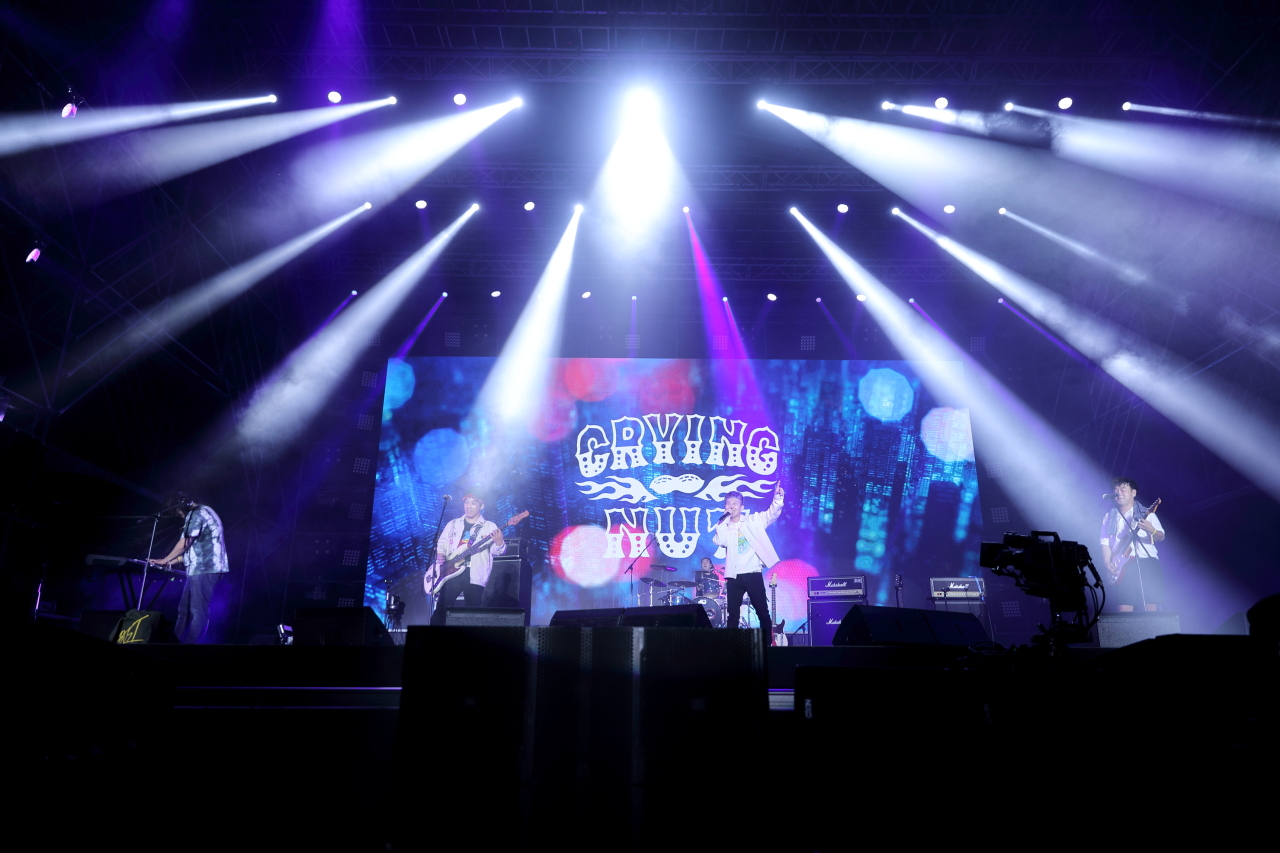 Crying Nut performs Oct. 2, 2021 at Busan International Rock Festival (Captain Rock Company)
Crying Nut, which marked its 25th anniversary in 2020, saw its big celebration plan come to naught in the first year of the pandemic. While it went ahead with the release of a 25th anniversary album, the group’s special concert was canceled and then eventually moved online.

The band, now in its 27th year, has not seen any change in the original members -- bassist Han, guitarist Lee Sang-myun, drummer Lee Sang-hyuk and vocalist and guitarist Park Yoon-sik -- except for the addition of accordion player Kim In-soo in 1999.

Four of them have been friends since kindergarten and began playing around with music in high school. They would listen to a tape together, share music magazines and make music. They were all just having fun, according to Han. They also came up with the name Crying Nut in 1993, in their second year of high school.

Crying Nut burst onto the music scene in 1995, billing itself as a punk rock band. The following year, the group released a debut album that included the band’s first hit, “Maldallija.”

“We began performing at Drug, a live club, in 1995. Back then, no one was doing punk rock. We were the first,” Han said. Critics, however, disputed the band’s claim to punk rock, Han recalled. The group did not fit into the frame of the punk bands of the 1970s UK, its detractors said.

The group agonized over the label, too. “In the end, we did not want to lock ourselves into a punk frame,” said Han. “We said,let’s just do as we wish.”

Among themselves, Crying Nut said they were doing “Joseon punk.” “We determined that we would just do our kind of punk,” Han said. Twenty-seven years later the band is oblivious to what others call them. “It doesn’t matter what others call us. Our music is Crying Nut. That is what we tell ourselves. It’s easy,” Han said.

One reason for the longevity of the band is the respect the bandmates have for each other’s differences. “Each of us has a different vibe and we let it be. And we influence each other in a positive way,” Han said.

“Sang-hyuk who plays the drums is really into Irish punk music, folk music and things like that. When he brings those elements, it becomes a Crying Nut-style Irish punk,” he said.

In fact, critics have, in reviewing the band’s latest albums, said that Crying Nut is a group that does a variety of music. The wide range is not lost on the public either. Some of their music has been described as lyrical punk rock, and is appreciated across generations.

Crying Nut’s music is usually bright, fun, whimsical and outright loud and raw. But listen carefully to the lyrics, and oftentimes they are anything but. The lyrics are ironic, self-deprecating and somewhat moody and sentimental, even. Why the dichotomy?

The answer could be found in the artist that Han respects most: Charlie Chaplin. “I think my music resembles Chaplin’s music,” said Han who, along with drummer Sang-hyuk, writes most of the lyrics for Crying Nut.

“You see, there is sadness in his comedy. There is laughter and a bit of sorrow. When those two elements come together and we pour everything out, playing and having fun to the point of exhaustion, there is a feeling of catharsis,” Han said.

“This serves to purify and I think this is a function of performance. People are consoled, I see that happening, Crying Nut is consoled and there is an exchange of energy.”

Among the first line-up of artists announced for this year’s Kyungrockjeol was singer-songwriter Lee Seung-yoon, who shot to fame by winning first prize in last year’s “Sing Again,” a popular music survival show.

“I reached out to him out of ‘fanship,‘” said Han, explaining that he only came across Lee and his music earlier this year.

Lee is also someone that Han would like to work with in the future, perhaps on a split album project. “I really liked his interviews and lyrics. He is someone who takes great pains in introspection. I also felt his sincerity in baring his soul on the stage,” Han said.

Last week, Han released a theme song titled “For Pure Pleasure Only” in anticipation of the upcoming event. “You can log in from overseas. You will get to see many well-known musicians and it will also be an opportunity to discover some gem of musicians,” said Han. He also promised that it would be a lot of fun to communicate in real time by leaving comments. “There will be a lot of fun and an exchange of good energy,” Han said.