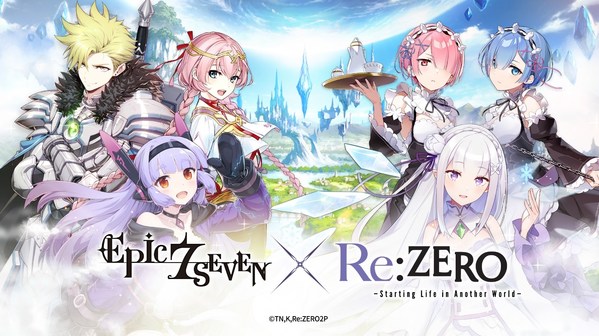 The collaboration with Re:ZERO will run for two weeks from August 5 to August 19. During this period, players will be able to meet Re:ZERO's leading characters Emilia, Ram, and Rem in the world of Epic Seven. The special Side Story "Guests from Another World" and Album Side Story "Flowers of Fortune" will also be available, in which players can read all about their adventures on Orbis.

First, players will be able to summon the Hero Emilia from August 5 to August 19. In the world of Re:ZERO, Emilia has the exceptional ability to use spiritual arts, and likewise, within Epic Seven, she makes her appearance as a 5★ Ice elemental Soul Weaver. The character Rem will also be available to summon as a Hero. As one of the main characters in Re:ZERO, Rem is a maid at the Roswaal Mansion, as well as the younger twin sister of Ram, who will also be obtainable during the collaboration as a free Hero.

More information about Epic Seven can be found on the official STOVE community (https://page.onstove.com/epicseven/global/main) and official YouTube Channel (https://www.youtube.com/channel/UC4dV8Fy1GiqjxU4OQ6ZoKWw).