With final location to be announced by year-end, experts call for more plans for proposed space

By Park Yuna
Published : Jul 28, 2021 - 16:12       Updated : Jul 28, 2021 - 17:09
When online reservations for the exhibitions of art donated by the late Samsung Group Chairman Lee Kun-hee at the National Museum of Korea and the National Museum of Modern and Contemporary Art, Korea opened last week, the slots filled up quickly, reflecting the public’s keen interest in the single-largest art donation ever in Korea.

When the government hinted that a new building may be necessary to house the donated artwork, citing the lack of sufficient storage space at the MMCA -- the MMCA received 1,488 modern and contemporary artworks while the National Museum of Korea received 21,600 items -- cities and provinces with even the slightest of ties to the late businessman claimed they were entitled to host the new institution.

Early this month, the Culture Ministry announced two candidate sites for the new building -- one near the National Museum of Korea in Yongsan and the other near the MMCA in central Seoul. The building, which would house the works donated by the late Lee, is tentatively named the Lee Kun-hee donation hall.

During the press briefing, Culture Minister Hwang Hee said that the building was expected to be completed by 2027 or 2028 at a cost of some 100 billion won ($86.8 million).

Aside from the fact that a new building is to be built, everything else about the proposal remains unclear.

“Nothing has been decided yet about the details, including whether the building will have a storage facility. It has also not been decided whether it will be an entity that is independent of the two museums,” a Culture Ministry official told The Korea Herald.

“The certain thing is that the donation hall and the two national museums will be under integrated management by the ministry and will collaborate when holding exhibitions,” he added.

Many art experts take issue with the haphazard planning.

“When it comes to building a museum, research and primary data about the artworks should come first. Otherwise, it would be hard to gauge the necessary size of the building, exhibition halls, etc.,” said Kwon Chee-yun, a professor at Arts and Cultural Management at Hongik University.

On July 14, the government issued an “urgent bidding notice” for research personnel to conduct a four-month research on the “basic plan for building a donation hall.”

“I do not understand how the government could have pushed for such a large project in the first place without executing such basic research in advance and hurriedly issued the tender,” said Chung Joon-mo, a former chief curator at the MMCA and head of the Korea Art Authentication and Appraisal Research Center. He also leads a group calling for the establishment of a public modern art museum.

The stakeholders of the proposed entity, including the two museums and the government, have different ideas about how the new building is to be used.

When Hwang announced the donation in April, he said a new museum or storage expansion should be considered to accommodate Lee’s bequest to the MMCA. The storage for three MMCA branches – Seoul, Cheongju and Gwacheon – is currently filled to 93 percent capacity.

"Securing extra storage space for the collection was the ‘immutable factor’ when we discussed a new building, especially because the MMCA is running out of space,” said an official from the Culture Ministry. “But now we do not know where to house the collection -- whether it will remain at the two museums, or at new storage facility if it’s built in the donation hall.” 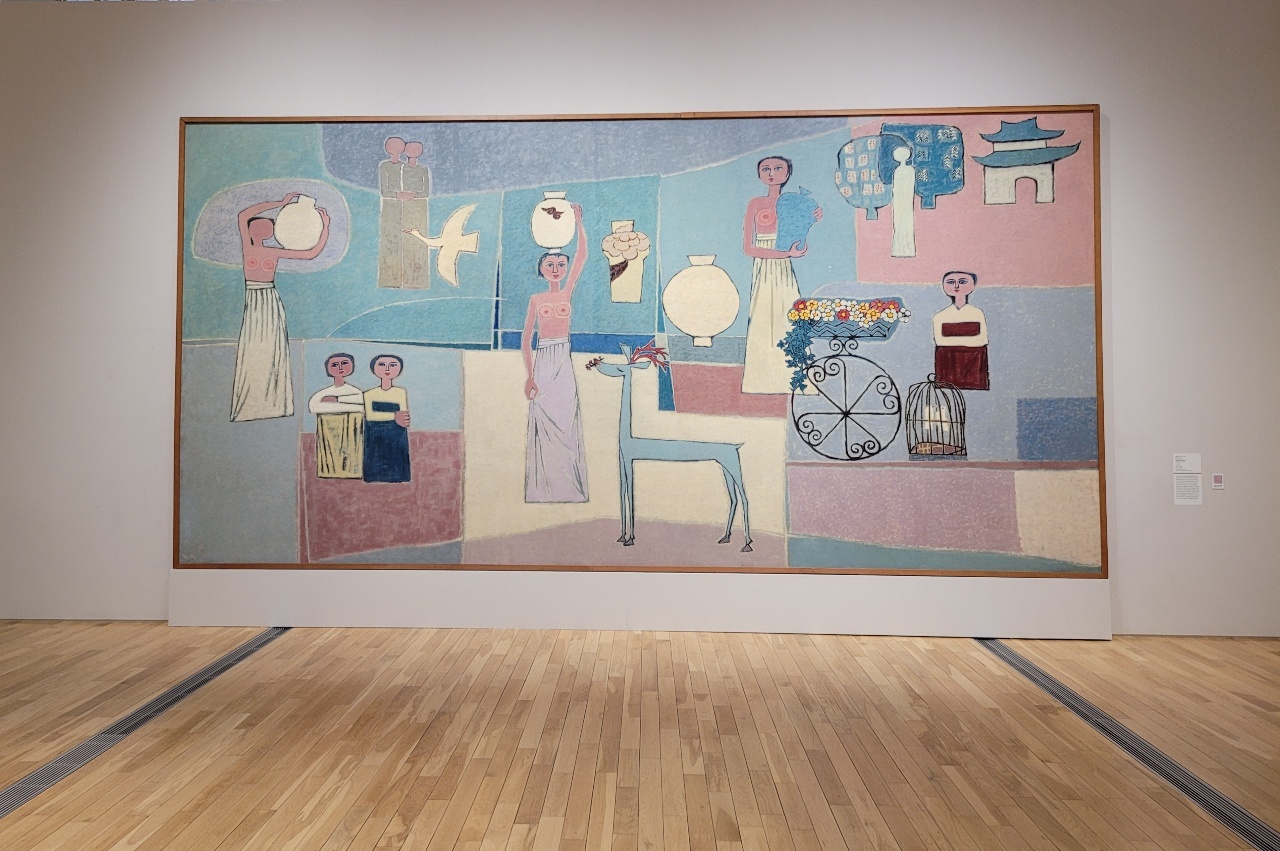 "Women and Jars” by Kim Whan-ki is on display at “MMCA Lee Kun-hee Collection: Masterpieces of Korean Art” at the MMCA Seoul. (Park Yuna/The Korea Herald)
The ministry has formed a committee of art experts and officials to deal with the newly acquired works. Kim Young-na, who heads the committee and was a former director of the National Museum of Korea, is convinced that the building will “definitely” have a vault.

“Although it has tentatively been named ‘donation hall,’ it will function as a museum. So it will conduct research and hold seminars and have a storage facility like a typical museum. We did not name it ‘Lee Kun-hee Museum’ as it gives an impression that the museum was built by Lee,” Kim told The Korea Herald.

Kim said that showing the donated works in one place rather than scattering them among the museums would show better appreciation to the donor.

"Also, the scale of donation was exceptional and unprecedented. I personally think the donated works are worth a new separate building.”

While the Culture Ministry and the committee expect the proposed building will have storage space and function as a museum, the two museums that received the artworks seem to think have different thoughts, showing little interest in the donation hall.

“Our (the museums’) stance is that we keep the works that were given to the museums, which we believe is a much more efficient way to manage and study the artworks,” Youn Bum-mo, head of MMCA, told The Korea Herald. “But, for now, nothing has been decided regarding the building. For us, what is urgent is securing more storage at MMCA.”

After receiving the artworks, the MMCA proudly announced that the museum’s collection now boasts more than 10,000 pieces.

“The central government and provincial governments build a museum building approaching it as a tourism attraction. Sometimes, they seriously lack the professional approach in planning how a museum would be used and how it would be realized,” Kim said. “How could building a museum be decided this soon, setting a deadline to announce the plan? If it’s a museum, its collection should expand and develop over time. We need to keep an eye on whether the donation hall for Lee’s collection will function that way.”