By Park Yuna
Published : Jul 15, 2021 - 17:49       Updated : Jul 16, 2021 - 10:21
Nam June Paik Art Center, the only art center dedicated to the video art pioneer, is showcasing two special exhibitions to help understand Paik’s philosophy when he was part of Fluxus -- an avant-garde art movement in the 1950s that challenged conventional art -- and how his legacy lives on today.

The art center, located in Gyeonggi Province, kicked off “Open Codes: Networked Commons” this month in collaboration with ZKM Karlsruhe, a media art museum in Germany. The exhibition explores how humans have become intertwined with the world of digital codes, or the language of computer programming, and questions how we can better adapt to the fast-evolving digital world. 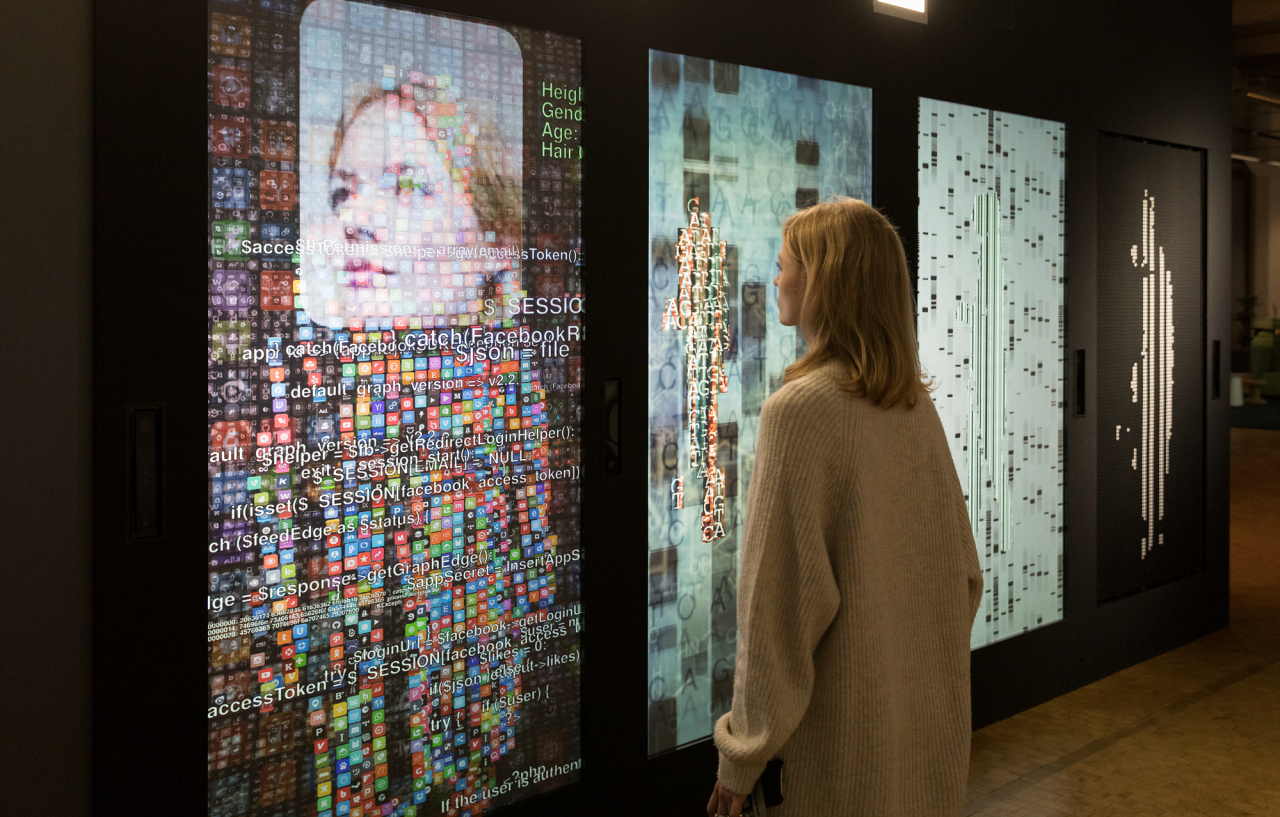 The multichannel projection is a core element of the exhibition. Upon entering, visitors will see their familiar reflections in a mirror, which is the most real virtual depiction that they can imagine. Then they will see how their image can be transformed into a readable code as a digital data-body with sensor data.

A number of monitoring screens hang from the ceiling like clouds. The installation work “The World as a Field of Data” was created by Peter Weibel and installation artist Christian Loelkes.

"It seems smartphones and computers have played the role of the sun or moon in the digital era. The sun, moon and stars have been replaced by satellites and other technological instruments,” said Kim Yoon-seo, a co-curator of the exhibition. “We wanted to imply the artwork as ‘data cloud’ hanging in the air, which goes along with the natural scene seen from the windows.”

The highlight of the exhibition is the etching work “Key to the Highway (Rosetta Stone)” by Paik Nam-june, which takes the form of Rosetta Stone -- a granite stone inscribed in 196 BC with the decree of the Ptolemaic Dynasty in three languages -- ancient Egyptian hieroglyphic, demotic scripts and ancient Greek. Paik engraved images of automobiles, Buddha, satellites and televisions as well as his random thoughts about art in five languages. 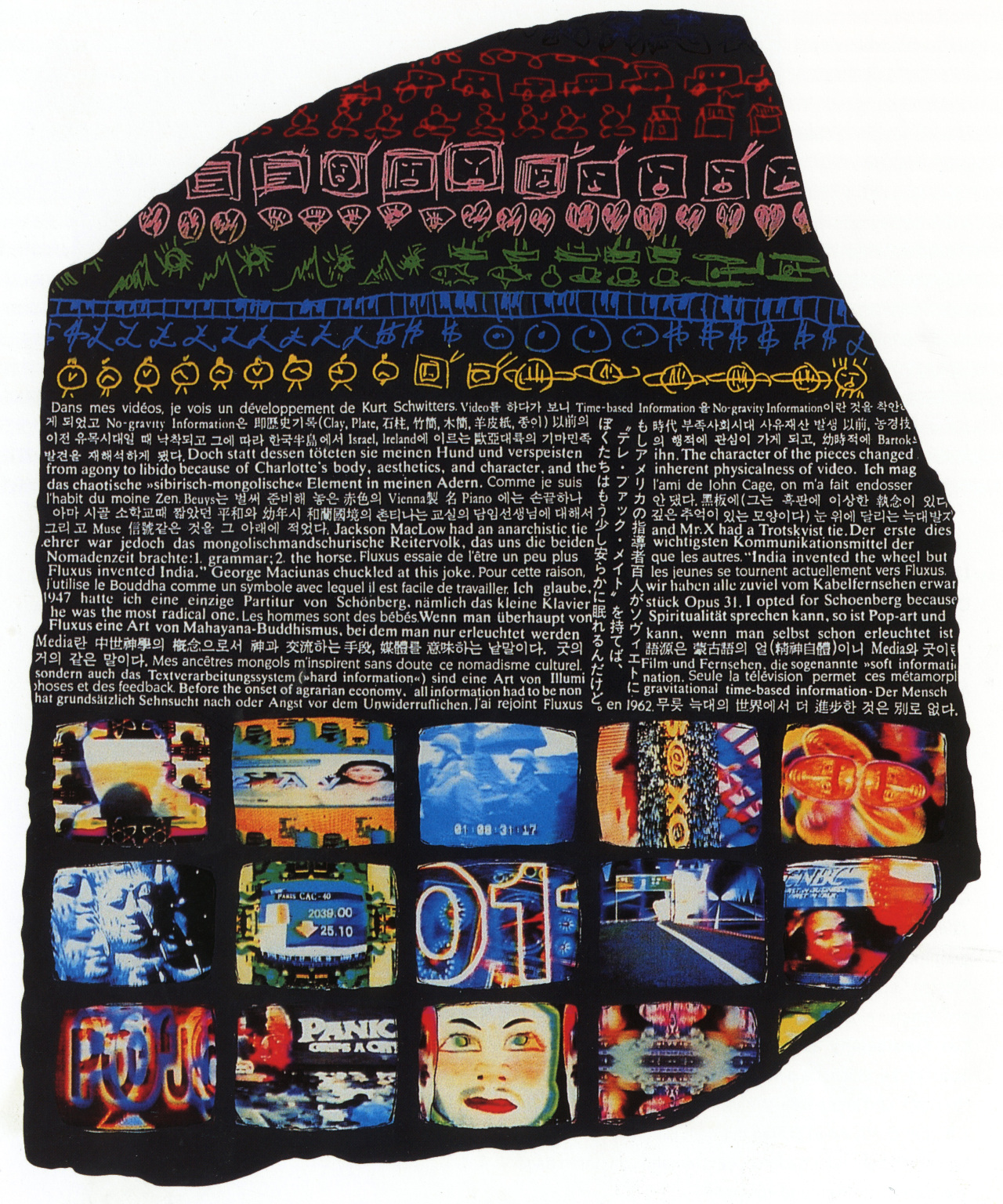 "Key to the Highway (Rosetta Stone)” by Paik Nam-june (Nam June Paik Estate)
"The interesting aspect of Paik’s works is that they can be interpreted in various ways depending on the exhibition. His etching work seemed like he was indicating how the different languages and drawings could be coded together,” Kim said.

Another exhibition “Humor Has It” at the art center is an archival exhibition that explores Paik’s art career that focused on the Fluxus movement. The exhibition offers a rare opportunity to learn the art movement that was at the core of Paik’s art.

Fluxus is a loose but revolutionary art movement born in the late 1950s in Europe and the US which dealt with issues of art and society in a witty way, challenging high art to present a new form of art that anyone could enjoy. Paik was at the center of Fluxus back in the times.

Fluxus saw everyday life and art as one and pursued their integration and emphasized the process rather than the product or result. Paik’s sensational performances derived from the movement, before pioneering video art became the cornerstone of his artistic career and influenced his video art.

The exhibition begins with photographs that show how Paik paid tribute to Jean-Pierre Wilhelm, a staunch sponsor of Fluxus artists and owner of Galerie 22, after his death in 1966. The Galerie 22 in Dusseldorf was a coveted space by avant-garde artists in the 1950s, and Paik believed Fluxus would not have existed if it were not for him. Paik later recalled that Wilhelm had a part in three turning points in Paik’s career, according to the museum.

The exhibition features 170 artworks and archives about Paik and Fluxus, including “Fluxkit” and many others that deliver implicative messages. The name “Fluxus” was first coined by Lithuanian American artist George Maciunas for his publication in 1961. 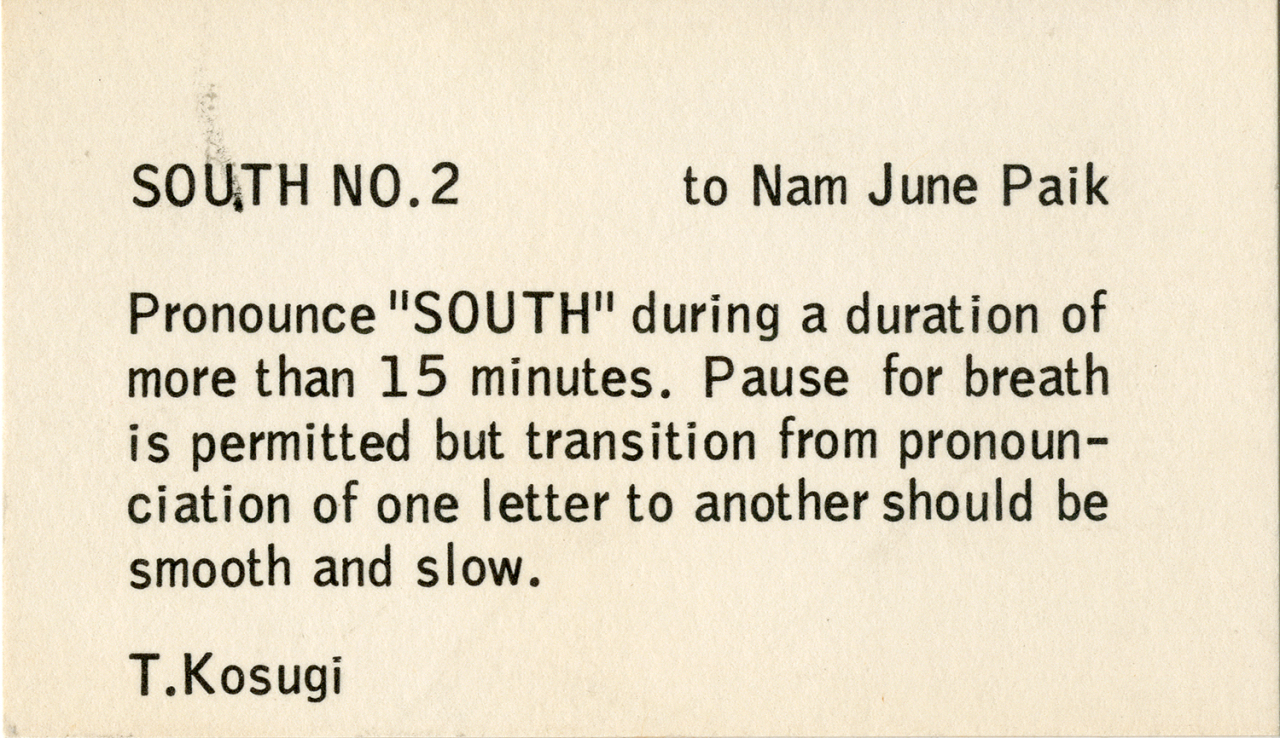 "South No. 2 (to Nam June Paik)” by Takehisa Kosugi (Jonas Mekas Visual Arts Center)
"This year marks the 60th anniversary of Fluxus,” said Chief Curator Park Sang-ae. “I personally thought the concept that penetrates Fluxus was humor as many of the performances and events performed by Fluxus artists are accompanied by witty and humorous elements while the message that they aimed to deliver was quite revolutionary and profound.”

The Nam June Paik Art Center is planning to showcase a special exhibition next year to commemorate the 90th anniversary of Paik’s birth.