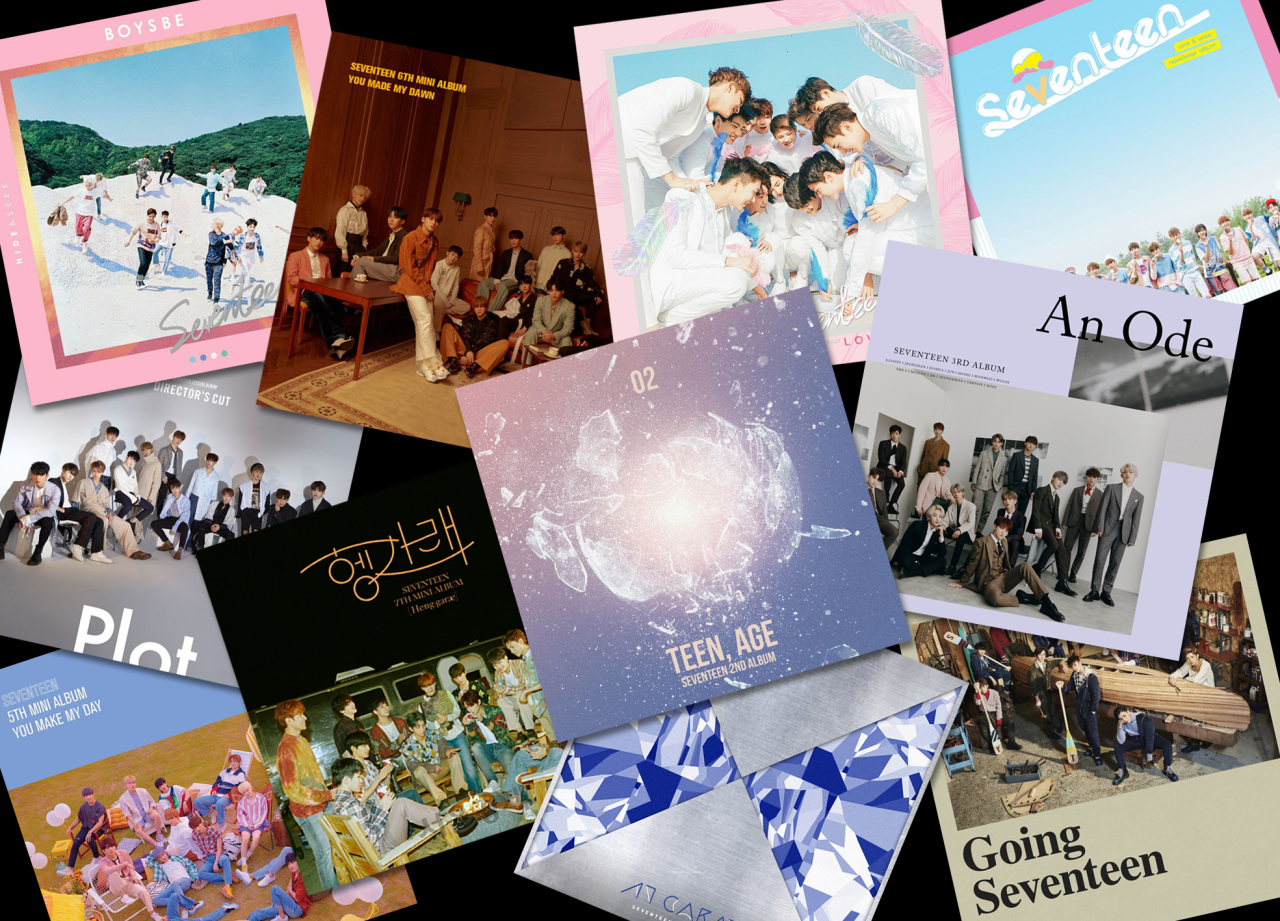 Since their debut in 2015, boy band Seventeen has shown strong and steady growth. And with their latest seventh EP “Heng:garae,” the act again set a new record -- the release sold over one million copies in its first week.

This figure, while impressive on its own, is even more oustanding considering the unfavorable market conditions due to the ongoing pandemic.

Let us celebrate the group’s remarkable feat with these top 30 tracks from the band over the past five years.

A soft, warm ballad, the band sings how they‘re here to give us a hug or a shoulder to cry on.

Performed by the band’s hip-hop unit, and lyrics written by Mingyu, Vernon and S.Coups, this track has a more melancholic atmosphere than Seventeen‘s usual upbeat songs.

This track opens up with a strong beat, and directly contradicts the band’s previous album‘s title track, “Fear.”

With a funky beat in the background, the bandmates sing about the purest form of love that can withstand time.

The song’s title in Korean means “Thumbs up.” Just like its title, the rest of the lyrics exude confidence and swag.

The group‘s first attempt at rock-pop, this track is peppered with electronic guitar riffs and evocative melodies that are reminiscent of a Japanese anime song.

A sexy, powerful track, it is a perfect combination of seamless rap, strong vocals and addictive electronic beats.

This track is filled with playful and cheerful vibes as the bandmates sing all together in the chorus with clapping sounds in the background.

Hopeful and nostaglic at the same time, this song seems like a perfect soundtrack for summer nights (and dawns of course) with friends and lovers.

Kicking off with an emotive piano melody, this ballad is sung by four vocalists and filled with their luscious, breathy vocals.

Sung by the group’s performance unit, Hoshi, Jun, The 8 and Dino, this jam puts a refreshing spin on the classic summer dance track and blends tropical elements and rhythmic synths together.

Another track by the performance unit, the song talks about meeting their significant other in an otherwordly place. The muffled bass, generous synths and diverse musical composition adds a psychedelic feel.

This ebullient pop track encourages people to escape from their daily lives and enjoy or “heal” themselves. Its music video featuring the bandmates chilling in various vacation spots makes the song even more festive.

The music video for this track shows the band trapped in rooms that represent their anxieties expressed in the song -- their past, the spotlight and their own selves.

This energetic track returns to the band‘s retro funk vibe with punchy vocals and upbeat guitar riffs like in their iconic singles, “Very Nice” and “Boom Boom.”

A sweet serenade for fans, this feel-good track captures the bandmates’ affection toward Carat.

Hailed as one of the best debut singles from a K-pop act, this funky pop song is instantly addictive with a dance-ready hook. It also demonstrates the band‘s musicality as members Woozi, Vernon and S.Coups wrote the lyrics.

This track takes on a darker theme, as the members express how they fear being a toxic influence to those they love.

Powered by explosive EDM synths and thumping rhythms, “Hit” includes a dance breakdown and chanting chorus that makes it a true hit.

This bright summer track shows the bandmates’ multifaceted talents -- from peppy vocals from the group‘s singers to deep tones from the rappers.

Mansae in Korean means “hooray,” and the band uses the word to shout the love they have for their crush and say how they just want to “mansae” when they look at them.

Included in the hip-hop unit‘s mixtape album, this track has a trap-like rhythm and recounts the band’s Asia tour where they went to 13 different cities in 10 countries over three months.

This track has a trendy tune that reminds listeners of Coldplay or The Chainsmokers, with lyrics that repent about a lost love.

The lead track off of the special album, “Director’s Cut,” is a melancholic electronic song that expresses thanks to people who showed them love and helped them grow but are no longer around.

Known as a fan favorite, this effusive and buoyant track showcases the act’s softer side with romantic lyrics and upbeat melodies. It also earned the group its first win on a local music show.

The lead track of the band‘s sixth mini-album, “You Make My Dawn,” this urban future R&B track is soothing and full of warmth while being catchy at the same time.

One of the act’s biggest hits, “Very Nice” is a high energy track that blends multiple musical elements. Putting it on in the morning will make you jump out of bed and improveyour mood.

From the band’s latest album that broke multiple records, this inspirational song tells today‘s youth to look up if they can’t choose to go left or right.

“When I first heard ‘Left & Right,’ I found myself humming and moving along with the song,” member Seungkwan said during the media showcase last month.