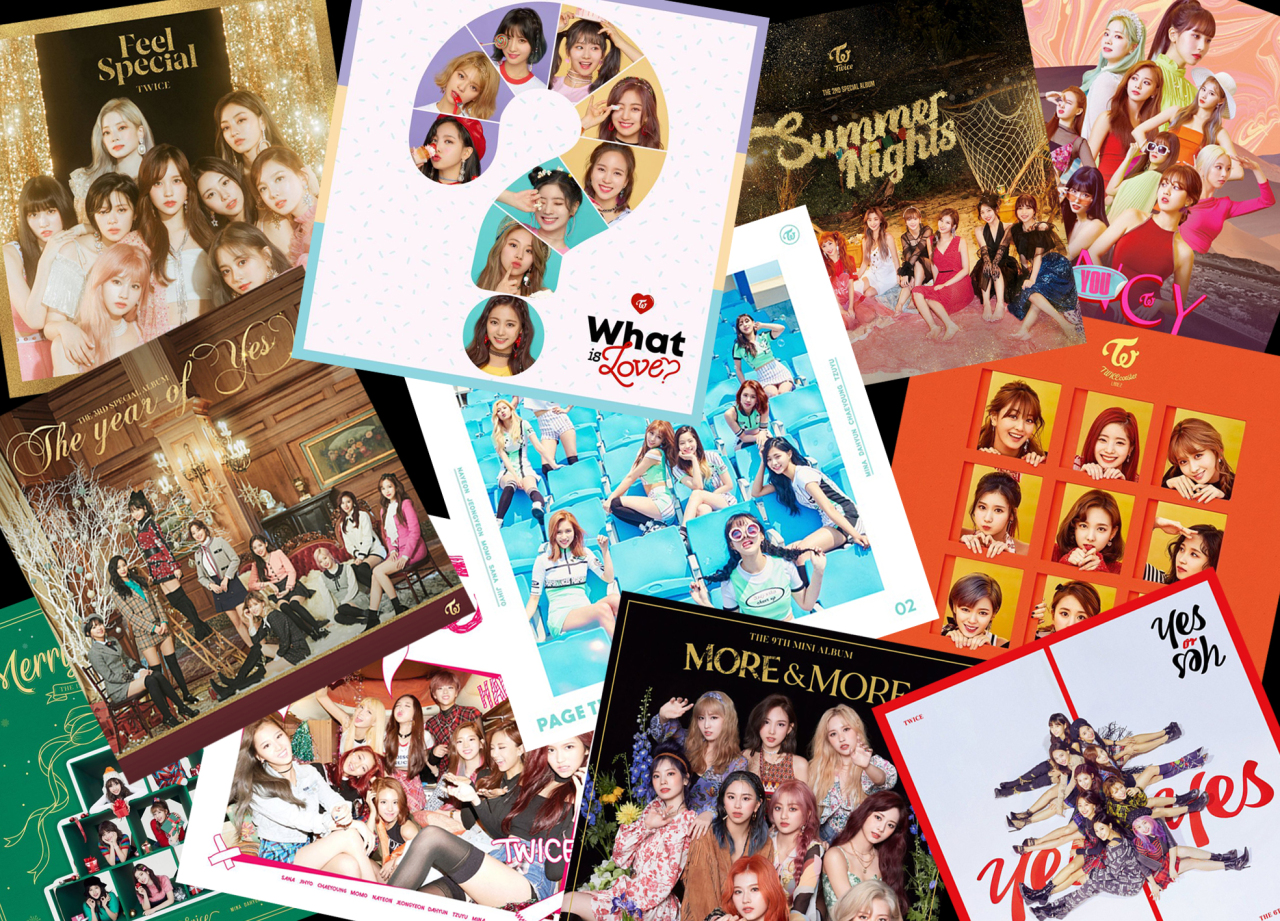 Songs on Twice’s latest album “More & More” have a more mature sound and “Firework” is no exception. With Latin guitar melodies sprinkled all over, the rhythmic tune conjures up images of fireworks on a summer night.

As bright and cheerful beats open the song, the group’s warm vocals sing in harmony, “Chill and chill and relax-lax” as the song talks of wanting to go on a holiday for a week. It’s a holiday playlist essential.

The track from their debut EP “The Story Begins” falls on the acoustic side of the group’s discography, and the piano ballad with a generous dose of harmonica puts their vocals on display.

From the softly sung vocals, simple arrangements to a high falsetto chorus, the slow and sensual tune shows a side different to the nine-piece multinational act’s usual bright pop sound.

With the lyrics written by J.Y. Park “The Asiansoul,” “Do It Again” comes with a shouty chorus and plenty of sass and attitude.

As the title suggests, the 2017 song from the repackage of their first full-length studio album “Merry & happy” is Twice’s subtle but fitting take on Christmas music.

Packed with sass and groove, the jazzy, tropical pop tune encapsulates the sweetness of summer nights.

Another track from “Feel Special” to make it on the list is “Love Foolish” – a sensual mid-tempo track that departs from its usual sugary pop sound.

This catchy straight pop song from J.Y.Park is a remake of a song of the same title by Park Ji-yoon in 1998. Twice’s version, however, took a more pop approach and was given the rap treatment, resulting in an even more upbeat sound.

“Ooh, catch me if you can,” the group sings in the bridge. Fueled by playful beats, strong bass and playful lyrics written in part by Momo, “HOT” is a solid pop song that speaks to Twice’s continuously changing sound.

Jihyo wrote the lyrics for the girl-power anthem, co-written and co-produced by Charlie XCX. Powerful yet smooth with high-energy piano riffs, it’s a perfect marching song for every woman out there.

Written by Earattack and Louise Frick Sveen, a sweet vocal sings the intro before it quickly progresses into a chorus full of fun melodies and vivid beats followed by bouncy electronic guitar riffs.

The slow tune from the special album “The year of ‘YES’” is a winter ballad featuring sweet vocals juxtaposed with subtle melodies that depict the tingling feelings of being in love.

It’s time for some acoustic goodness. “Turtle” shows a quieter side of the pop princesses, as they kept the arrangement simple with references to “The Tortoise and the Hare.”

In the mood for dancing? “Trick it” might just do the trick, with its high-energy arrangement and buttery smooth beats.

Even at the first listen, the influence of J.Y. Park, who wrote the track, is quite clear – in the playful and at times soulful chorus, as well as the rhythmic bridge.

“Get Loud” is a quintessential girl group song that checks all the boxes – the dramatic arrangement of the song, multi-layered vocals and the equally snappy intro and ending. Adding to the greatness is the playful yet risqué lyrics, as the group sings, “Stop with the dangerous jokes, or there‘s going to be trouble.”

With lyrics written by Jeongyeon and Chaeyoung, Twice does what they do best on the romance-themed track, which is upbeat, straight pop.

Laden with brass, the easy-going song is a summer number that treads carefully between going full tropical and staying understated.

Twice refuses to take “no” for an answer on the song about love from their fifth EP “YES or YES.” The bold and iconic lyrics were written by Sim Eun-jee while David Amber and Andy Love composed the melodies.

Written by David Amber and Sean Alexander, the 2017 single saw the group continue their winning streak with the high-energy saccharin pop sound

As the fitting title should tell you, “More & More” is tropical pop perfection that is a slow burner. Following the group‘s previous two singles with a power chorus – “Fancy” and “Feel Special” -- the 2020 single sees the vocals take a backseat soon after an upward-spiraling bridge, as the chorus relies on criminally catchy beats.

Oozing youthful energy, Twice made a splash on the music scene with their debut single from their first EP “The Story Begins,” marking the beginning of their successful career. Since then, they have gone on to become one of the biggest girl groups in history.

Black Eyed Pilseung and Jeon Gun teamed up for the track that follows in the footsteps of the group’s previous hits ”Like Ooh-Ahh“ and ”Cheer Up“ in terms of sound. In Twice’s signature fashion, the song comes with a catchy and repetitive chorus that goes, “Me likey, me likey, likey, likey.”

With the video having racked up over 500 million views and the iconic choreography that involves a lot of hand motions, “TT” is easily one of Twice’s best works. The song conveys multiple moods from the group’s general cheerfulness to the slightly sad chorus.

With the instant mood lifter that is “Cheer Up,” the cheerleading-inspired song that incorporates hip-hop and tropical house elements solidified the group’s position in the music scene with their cheerful yet powerful image.

After years of cheering up millions of fans around the world with bright pop songs release after release, the 2019 single saw the group opt for something more mature, darker and sexier. Written by Black Eyed Pilseung and Gun and marked by the slick and psychedelic aesthetic and polished pop sound, “Fancy” and this era of Twice will always stand out in their career.

Twice tackles the million-dollar question of what love is in a way that no others could have done better – in a song that is high-energy, catchy yet soft. It’s a sonic essay on love that captures the essence of Twice.

In a time marred by the pandemic and general unrest, the title track from their eighth EP stands tall as a powerful celebration of life, love and persistence. As the chorus goes, “You make me feel special,” an avalanche of uplifting synths and joyful melodies take over your ears. It’s a dance-pop anthem that we can all enjoy.