Inside a building in southern Seoul dedicated to the government-designated national intangible cultural assets, Hong Jung-sil, 72, works, studies and teaches as one of 12 resident artisans.

Her area of expertise is “ipsa,” the art of inlaying thin threads of silver, gold and other precious metals onto harder surfaces such as iron, creating exquisite decorative patterns. The craft, which dates back to the fourth century, might have been lost if not for her.

On a self-imposed mission to revive the centuries-old skill, already considered extinct in the 1970s, she started from scratch -- visiting old metalsmiths in the provinces for a clue. It was the beginning of her four-decade love affair with traditional metalcrafts that blazed a trail in the country’s arts scene.

A young Hong was a metal arts student who loved everything that was beautiful, she said in a recent interview at her aforementioned studio inside the Training Center for the National Intangible Cultural Properties.

One day she stumbled upon a Joseon-era (1392-1910) artifact inlaid with silver at an antique shop in Insa-dong. And she fell hard for it.

“I was stunned by its beauty. I felt like the artifact was talking to me. ‘Am I not something? Won’t you help me shine again?’”

At that time, having studied the history of metal arts both Korean and Western, she was aware that the nobility of the Joseon era had prized metalwork with inlaid patterns and that the tradition had not survived the turbulent process of modernization.

After seeing a piece of the ipsa art for the first time, however, she could not help but want to learn more about it.

“I was so determined that I would devote myself to reviving the craft. So full of hope, optimism and passion,” Hong recalled. “I was young back then.”

After six years of searching for clues, fate finally presented one in 1978. She met a person who knew someone whose father may have done something similar in the past.

That was how she met her late teacher, Lee Hak-eung, who was the last living metalsmith belonging to Joseon’s “gyeonggongjang,” where the finest craftsmen of various fields were managed at a national level. Lee was 78 years old and had not picked up his tools for many years.

“He was like a grandfather to me. Actually one of his grandchildren was two years my junior and went to the same high school as me, I later learned,” she said.

Meeting Lee was one of the greatest things that happened to her, she said. “He was very keen on teaching me everything he knew. He was glad to pass his trade on to me.”

For the next 10 years, until the great master passed away in 1988, Hong frequently visited him at his home in Seoul, absorbing everything he said like a sponge. “His words were like the Bible.”

While trying to master the trade, Hong also single-handedly campaigned for the government’s recognition of ipsa as a National Intangible Cultural Heritage, doing all the paperwork herself. In 1983, ipsa was designated as intangible asset No. 78 and Lee as its holder. Hong assumed that title in 1996.

On her quest to ipsa craftsmanship, she came to develop a deeper understanding of Korea’s traditional metal arts. To record it, she penned three books, including one on the world of traditional tools used by old craftsmen to weld, bend, chisel or decorate metalwork.

“At that time, no one paid attention to our tradition. The local metal arts community was busy playing catch-up with the Western world,” she explained. “After seeing so much with my own eyes, I just had to do something.”

Having established herself as a living authority on the subject of traditional metalcraft, she continued her artistic pursuits. She believes an aesthetic design is more important than one’s dexterity and precision with inlaying techniques.

“To create a beautiful inlay work, you have to have that artistic sense to envision how your design will turn up on the surface of the chosen sculpture -- a cube, a sphere or any other shape. Manual skills can be mastered if you put in enough time and effort,” she said.

Her works speak for themselves. 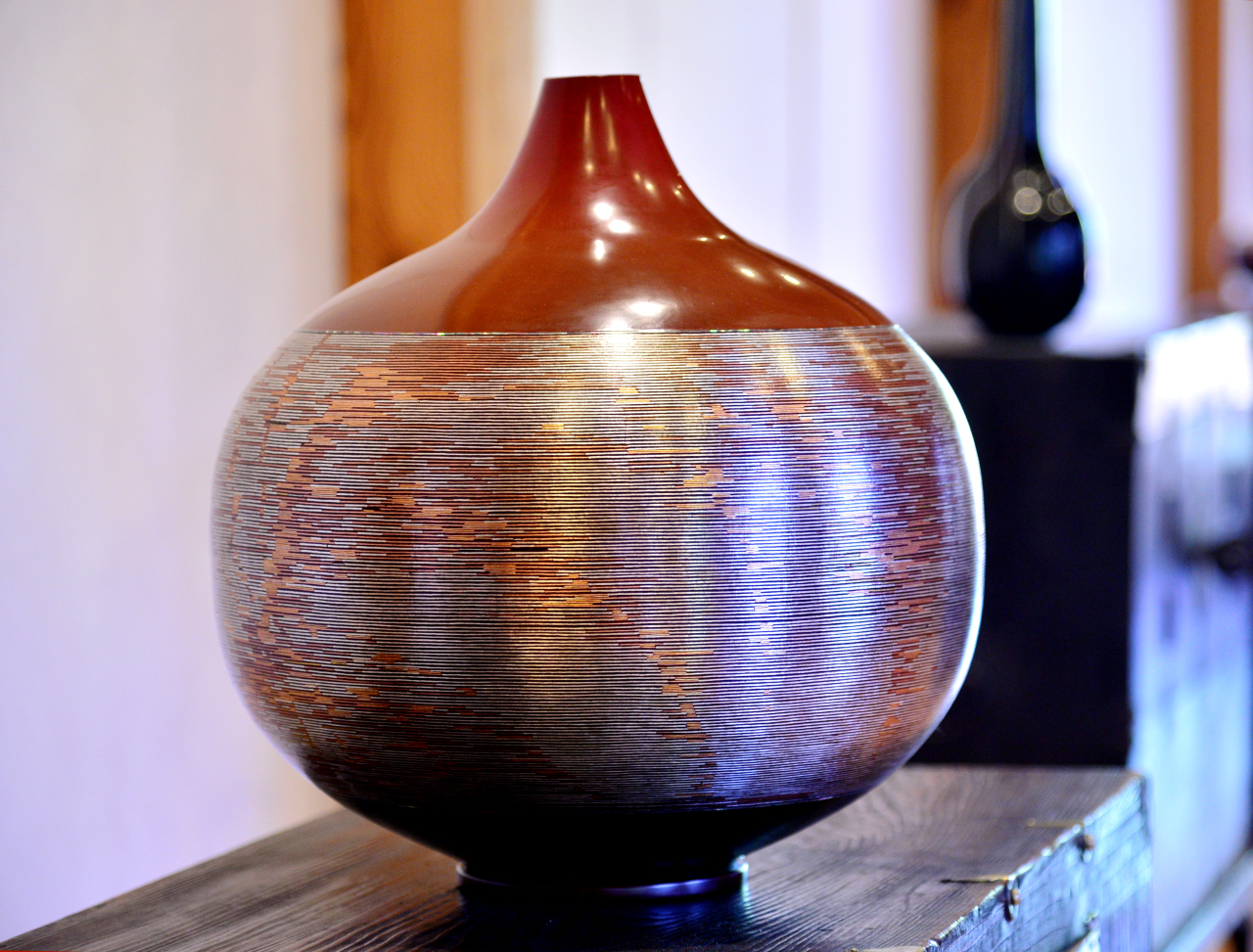 “Some threads are silver. Some are gold and copper. At some points, silver wires congregate. At others they are dispersed,” she said.

Another work, titled “Kind Hearted,” is an oval iron sculpture. The surface adorns inlays of silver and gold that create images of flowers and birds. “It took a painterly approach,” she said.

Her works, some of which have been showcased at overseas art exhibitions, have drawn interest from overseas buyers for their unique blends of contemporary and traditional.

“If we want the world to know about Korea’s traditional crafts, we should continue doing what we’re doing: Keep learning about our tradition and keep creating art based on the tradition.”