[Weekender] From tech to tonics, sleep aids are all around

A range of sleep aids are now available to help you rest, from mobile applications and home electronics to more conventional options like food and supplements.

For Lee Ji-woo, a sleep-deprived mother with an 18-month son, a good night’s rest has become the most precious thing in her life. Having slept for more than nine hours a day for most of her life, she has suffered from a chronic sleep deficit since the baby was born.

“The lack of sleep time affects the caring of my son too. So I started to seek ways to improve quality instead of quantity.”

Her choice of sleep assistance was a mobile app, as recommended by her acquaintances. Out of nearly 40 different sleep-related applications, free or paid, that appear in the health and medication category on Play Store, she chose two, Pzizz and Sleep Cycle Alarm Clock.

To get a power nap during her son’s nap time, she relies on Pzizz’s “fall asleep fast” mode that helps users relax with a combination of music, sound effects and narration. Users can choose a dreamscape that they want in the app setting.

“I found the app helpful for falling asleep pretty right away, and an even better part of this app is that the wake-up alarm sound does not irritate me,” Lee said.

When Lee goes to bed at night, she places her phone on a bedside table right next to her. And she sets a wake-up time at between 7 a.m. and 7:30 a.m. with the Sleep Cycle Alarm Clock app. 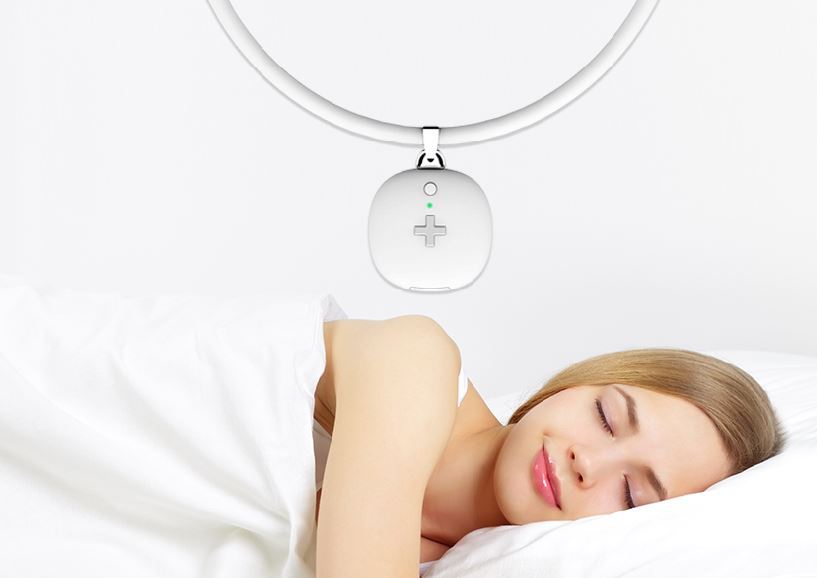 The app records sleep habits and the alarm wakes users during light sleep by using the sleep cycle theory. It senses people’s sleep movements and rings to wake them up at an optimal time in one’s sleep cycle.

More globally used is the app “Calm” that offers sleep stories both for kids and adults, which are read by people with soothing voices including celebrities like Matthew McConaughey.

Other than the smartphone apps, wearable devices designed to help users improve the quality of their sleep were introduced at the Consumer Electronics Show 2019 in Las Vegas.

By wearing the 10-gram device for 30 minutes per day, 60 percent of users reported that they felt benefits within the first three days, according to the firm.

UK company Dyson launched the Lightcycle Task Light for the Korean market in February, featuring a sleep mode. The light has seven pre-set modes, which are sleep, study, relax, precision, boost and away. The sleep mode, designed for night-time use, deactivates the light’s movement sensor so the light does not come on if the user stirs while sleeping.

It also reduces brightness and color temperature to their lowest levels to minimize disturbance when the light is kept by the bedside and turned on at night.

For better bedtime conditions, the company also rolled out an air purifier, which it introduces as a personal purifying fan, “Pure Cool Me.” The device is equipped with an intelligent light sensing system that actively tracks the ambient light and automatically dims or brightens the built-in LCD screen in real time to blend in with surrounding environment. When the sensing system detects that the environment has become pitch dark, it automatically switches off the LCD screen without turning the machine off.

Japan’s Balmuda introduced Balmuda The Light for students, featuring LED technology that reduces blue light that is harmful to getting decent sleep.

“Users describe falling asleep after using the Balmuda The Light feels like falling asleep under the sun, which they say helps relieve insomnia,” said a PR official in Korea.

Kim Seong-mee, a 35-year-old single office worker, does not forget to drop by drugstores whenever she visits the United States.

She bought 1-milligram Melatonin tablets by Nature’s Bounty during her recent business trip to San Francisco.

“I take two to three Melatonin tablets when I cannot stop brain activity after fierce work,” Kim said. “I found it also useful when I’m on board or suffer a jet lag due to frequent business trips.”

Melatonin is a hormone that regulates sleep and wake cycles. The tablets by Nature’s Bounty are an over-the-counter product in the US as a sleep support. In Korea, however, they are not available for purchase without a doctor’s prescription.

Instead, Korean companies are introducing supplements that do not violate the country’s medicine law by using ingredients that are not controlled drugs.

Amorepacific, the No.1 cosmetics company here, launched Easy Sleep in April, under its health food brand Vital Beautie. The tablets include rice bran extract as a major ingredient that helps reduce the struggling time fall asleep and induce deeper sleep.