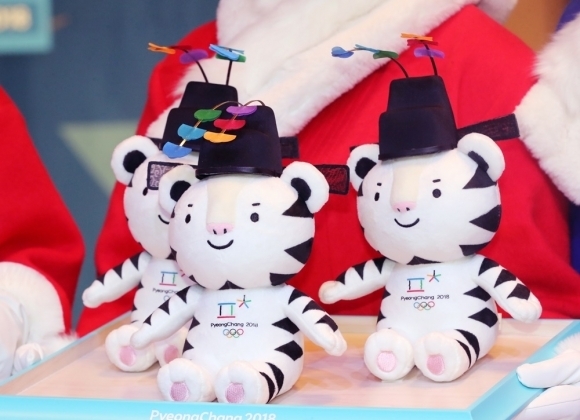 Why Soohorang plushies instead of medals at Winter Olympic events?

[1] If you’ve been watching the Olympics, you may have been confused to see winning athletes being handed not medals, but dolls of Soohorang, the official white tiger mascot of the PyeongChang Games. You might also have wondered whether the flower bouquets, which traditionally get presented with the medals at the Olympics, have entirely disappeared.

[2] Why the stuffed tigers instead of medals?

Aside from its adorable appearance, the mini Soohorang plushie handed to the winning athlete has a special meaning tied to traditional Korean culture.

[3] The mini Soohorang is wearing a hat adorned with colorful paper flowers, called usahwa. These flowers were bestowed by the king to those who passed the national service exam during Korea’s Joseon Dynasty (1392-1910). In bestowing the Usahwa Soohorang to the winning Olympians, South Korea is recognizing their achievement in accordance with a Korean tradition.

[4] The flowers decorating the hat also are part of a longstanding tradition of handing bouquets of flowers to Olympic winners. Flowers were not given out at the 2016 Rio Olympics due to Brazil’s eco-friendly Olympics pledge, and PyeongChang has continued this.

[1] The future of the security situation on the Korean Peninsula appears uncertain, despite an Olympic detente that has been feeding hopes for improved relations, and even an inter-Korean summit. On Monday, 38 North -- the North Korea analysis website operated by US-Korea Institute at Johns Hopkins University -- reported that North Korea’s latest experimental light water reactor appears to be nearing completion.

[2] Citing satellite imagery of the North’s Yongbyon nuclear facility, 38 North reported that “steady progress” had been made on the reactor the North began constructing in 2010. According to the report, the reactor appears “externally complete” and a plutonium production reactor at the site may recently have been in operation.

[3] The 38 North report follows on the heels of a US senator’s comment that a military conflict between the US and its allies and North Korea would be brief, but cause destruction of “biblical proportions.”