[Lee Sun-young] Agony of living in a small country 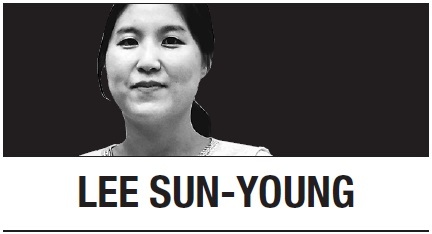 Shortly before Chuseok, the Korean thanksgiving, earlier this month, I had the opportunity to step back from the front line of daily news production and take a break.

I stayed a wonderful five nights and six days in Riga, the capital of Latvia, as part of a South Korean media delegation. It was slightly off the “best season” for travel in the Baltic state -- spring and summer -- but luckily the weather was mostly favorable, almost like the weather in Seoul now.

With its beautiful medieval city center, surprisingly good food, safe and relaxed atmosphere, Riga seemed to me like a well-kept secret. Definitely worth a visit, if you’re interested in a place relatively unknown to East Asian mass tourists.

As I learned more about Latvia and its people -- the program was tightly packed to show us many aspects of the country -- I found myself coming back to a question that has been nagging me in Seoul for the past several months.

It is about the sense of helplessness, or the timidity, when you belong to a small country and your nation has tough talks to do with great powers.

Handling news about North Korea’s unbridled pursuit of nuclear weapons, US President Donald Trump’s Twitter reactions and threats of “totally destroying” the North, amid China’s blatant retaliation against Korean companies for our decision to bring a US-led missile system here, I couldn’t help but think about the agony of a small country.

Latvia, too, is a small nation with a complicated history with its neighbors.

It has slightly less than 2 million people, compared to over 50 million here. Its territory is 64,589 square kilometers, which is about half the size of ours.

It has a long and checkered history that is punctuated by wars, occupations and invasions. I only knew about the most recent one, the Soviet occupation, but further back into history, Germany, Poland, Sweden and Imperial Russia had all laid claim to the nation.

After the Soviet Union collapsed in 1991, Latvia regained freedom, along with two other Baltic states, Lithuania and Estonia.

In 2004, the country joined the European Union and the North Atlantic Treaty Organization. It switched to the euro currency a decade later.

EU and NATO memberships seem to mean a lot in Latvia’s survival as a nation.

When I asked how the country handles relations with former occupiers, namely a resurgent Russia, which in 2014 annexed Crimean Peninsula from Ukraine, raged a proxy war in eastern Ukraine, and has increased military tensions along the border with Baltic states, Latvian officials I met had an almost identical answer: through the EU or NATO.

On an individual level, the Latvians -- especially younger generations -- try to be EU citizens, or global citizens, rather than being just Latvian nationals, knowing their country is a tiny dot and the world is a sea of opportunities.

I was surprised at how well young Latvians speak English. The country takes pride in its highly skilled, multilingual workforce.

“Because there are only 2 million who speak Latvian,” a University of Latvia student told me jokingly, when I asked why her English is so good.

Another said, “Since Latvia is a small country, there are not enough movies or books produced here. Teenagers learning English on YouTube is more for fun, I think.”

“Since there is almost no market here, startups think about the global market from day one,” a staff member at Latvia’s state-run startup support center said.

When foreign relations were not so high on our national agenda like these days, many South Korean leaders believed that we could become a small but powerful country through economic development. It did work to a degree.

Thanks to hardworking workers, despite having so few natural resources, South Korea has been the world’s most dramatic rags-to-riches story of the century. The mantra of that time was to earn those precious dollars through exports. Now, we are the world’s sixth-largest exporter.

But how are we in areas other than trade? Do we -- as a nation or individuals -- have our own survival strategy in this increasingly hostile world?

A trip to a country that at first looked so irrelevant to what was happening here made me ponder more about Korea’s place in the world.

Lee Sun-young is the national desk editor of The Korea Herald. She can be reached at miliaya@heraldcorp.com. -- Ed.