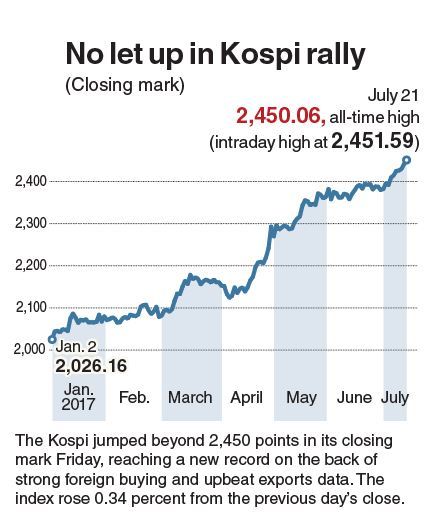 The unprecedented rally in South Korea’s stock market might ease off this week, according to analysts who cited vulnerabilities such as the US Federal Reserve Board’s possible hawkish signs and volatility in the markets and currency exchange rate.

Multiple analysts forecast the main bourse index would hover at around the current 2,450 mark, with the lowest at 2,410 and the highest at 2,470.

A slight hawkish tone from the July meeting of the Federal Open Market Committee held from Tuesday to Wednesday could “draw a visible market response” from the market, wrote Kim Yu-kyum, an economist at Cape Investment & Securities.

“If the economy shows a clearer pace of recovery, the monetary policy shift (of the central banks of major countries) might gain speed, and the FOMC meeting could be a starting point,” Kim wrote.

On Thursday, the European Central Bank and Bank of Japan both decided to hold their respective key rates steady.

Another analyst said the revision of the North American free trade deal outlined by the US could dent offshore cash flows into Korea’s stock market, which is “sensitive to currency exchange rates.”

“The US’ aim to deter currency manipulation through renegotiation of NAFTA could enlarge won-dollar volatility,” wrote Park Chun-young of Daishin Securities.

Korea has been put on a currency manipulation monitoring list by the US Treasury.

Moreover, the standard deviation of monthly stock return volatility, which gauges market volatility, will begin to rise on the main bourse, according to a quantitative analyst Kim Min-kyu of KB Securities, citing a seasonal factor that tends to widen such unpredictability from August.


The first-tier benchmark Korea Composite Stock Price Index has been on course for a record run for seven consecutive trading days through Friday, The Kospi closed at 2,450.06, up 0.34 percent from Thursday, marking the 20th record-high close this year.

Riding the leadership of information technology heavyweights, stocks of banks and refiners benefited from the rally, wrote Kim Yong-gu of Hana Financial Investment.

“Despite a weak dollar in July, the cash flow into emerging markets is on the wane, with their suffering lower-than-expected earnings reports in the second quarter,” Lee wrote. “But South Korea and Brazil are exceptions thanks to low valuation pressure and anticipation for higher earnings.”

The tech-heavy benchmark Korean Securities Dealers Automated Quotations hit 2017’s ceiling Thursday and Friday. The Kosdaq edged up 0.01 percent to close at 676.6, following the previous highest closing mark of 2017 at 676.51 on Thursday.

The Moon Jae-in administration’s decision to expand the Small and Medium Business Administration to a ministry Thursday is seen as an “apparent positive factor for small and medium-sized stocks on the Kosdaq” leading to “government-driven momentum set to shape out further,” Kim of Hana Financial Investment wrote.