US House lawmakers call for early deployment of THAAD system

A bipartisan group of US House lawmakers has introduced a resolution condemning North Korea's development of intercontinental ballistic missiles and calling for quick deployment of the US THAAD missile defense system in South Korea.

Rep. Joe Wilson (R-SC) brought in the resolution (H.Res.92) on Monday, together with four co-sponsors from both the Democratic and Republican parties, amid heightened tensions on the Korean Peninsula in the wake of North Korean leader Kim Jong-un's threat to test-fire an ICBM apparently capable of striking the US. 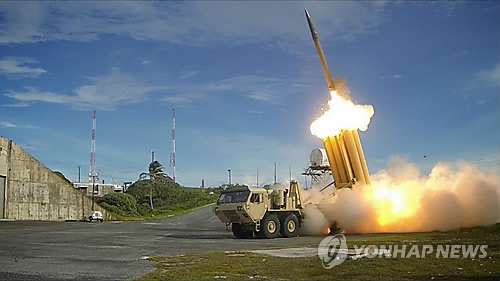 It marked the first congressional resolution introduced since the inauguration of President Donald Trump.

The resolution condemns the North's ICBM development, calls for prompt deployment of the THAAD system in the South and reaffirms the US support for "a layered, interoperable, multi-tier missile defense system to protect Americans and allies on the Korean Peninsula."

It also calls for continued bilateral security cooperation between the US and the South, such as foreign military sales, technology development, and joint exercises; reaffirms the US.

commitment to the alliance with the South; and supports the military intelligence sharing agreement between South Korea and Japan.

In addition, the resolution urges China to pressure the North through curtailing economic support and trade and to abide by all UN sanctions resolutions, and calls on the Trump administration to apply all available economic sanctions on Pyongyang. (Yonhap)