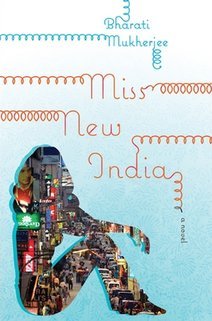 Anjali Bose has a dazzling smile, near-fluency in American-accented English, and a gnawing hunger for life outside her rural Indian town of Gauripur, where the dilapidated Pinky Mahal bears witness to stalled progress and her stolidly middle-class parents are forcing her into an arranged marriage.

Anjali, who prefers to call herself by the more modern Angie, is torn between a life conscribed by traditional rituals and a life of independence in the gleaming metropolis of Bangalore. One future offers the possibility of a handsome husband found through online matchmaking services; the other promises a place where young women like herself work as call-center service agents and sip coffee at Starbucks.

A brutal encounter with a sadistic potential suitor - and the encouragement of her English teacher and mentor - push the 19-year-old Anjali out of her small-town cocoon and into the dizzying, often mystifying, sometimes dangerous, streets of Bangalore.

In “Miss New India,” Indian-born Bharati Mukherjee portrays a country where old customs co-exist and often clash with new social mores; a country where Anjali tumbles loose from the limitations of caste and class, even as her father remains trapped by old structures and superstitions.

In this India, some girls endure elaborate beauty routines and pose for heavily retouched marriage portraits ― all in pursuit of the perfect mate. Others ― like Anjali ― flock to the city where they throw off the shackles of convention, rename themselves Millie or Suzie, and enjoy the once-forbidden freedoms of single life.

“I have seen more and learned more in Bangalore than I have from twenty years in Gauripur. Here I feel I can do anything. I feel I can change my life if that’s what I want!” declares a newly emboldened Anjali.

The novel grew out of Mukherjee’s fascination with India-based call centers and the dual identities of the workers, who often assume fully fleshed-out American personas.

Indeed, the descriptions of the call-center world, with its “accent enhancement” and “accent neutralization” classes and lessons in American pop culture, are mesmerizing. In those scenes, twentysomething Indians who often have never set foot in the U.S. rattle off references to Brad-and-Jen-and-Angelina, Seinfeld, Carrie Bradshaw and Hannibal Lecter.

“Miss New India” is at its strongest in its examination of a nation caught between past and future, and the struggle of young people straddling the nexus of the two extremes. But, at its core, the novel functions as a bildungsroman - the coming-of-age story of Anjali Bose.

And, unfortunately, that is also where “Miss New India” is at its weakest.

Even though Anjali is often described as a magnetic girl with a luminous smile and a seductive quality that draws strangers to her rescue, she is a strangely passive character who stumbles onto society-changing events and influential people. She doesn’t so much change her own life as wait for her life to be changed.

In a moment of epiphany, Anjali realizes that her “crime was that of constant, heedless wanting; wanting too much; wanting more of everything.” As a reader, I just wanted more from Anjali.