BUCHEON, Gyeonggi Province -- Writing about one of the most lethal weapon ever invented, Didier Alcante and Laurent-Frederic Bollee, the authors of “Atomic Bomb,” never expected to visit South Korea -- much less to win an award.

“This was our first time to win an award outside of our respective countries. We won a prize in Belgium, Canada and France. It is very nice to get international recognition,” Belgian author Alcante said in an interview with The Korea Herald at the Korea Manhwa Museum in Bucheon, Gyeonggi Province, Friday

French co-writer Bollee said that he started working on the project in 2015, never imagining that he would be in South Korea to receive a prize seven years later.

The 472-page graphic novel “Atomic Bomb” (“La Bombe” in French) revolves around the dropping of the atomic bomb in Hiroshima, Japan. Recognized for its realistic presentation of the invention of A-bomb amid the madness of war, “Atomic Bomb” won the overseas artwork award at this year’s Bucheon Cartoon Contest.

The authors said that Alcante’s friendship with a Japanese boy when he was 8 years old led them to start the amazing journey of writing a book involving the atomic bomb, and the stories of World War II.

“Though my friend went back to Japan when we were 9 years old, we became very good friends and kept in contact. When I was 11 years old, I visited Japan and I was able to visit the Hiroshima Peace Memorial Museum. I could see the effect of the atomic bomb for the first time. It was a shock for me and this topic has stayed in my head since childhood,” Alcante told The Korea Herald.

After deciding to write stories about the atomic bomb, Hiroshima and many aspects of World War II, Alcante hoped to enlist Bollee to to work on the project together.

“We needed five years to research and fully understand the subjects related to the atomic bomb. From scientific things to diplomatic relationships -- between Japan, the US and the USSR -- and the military operations. I remember I read a books for three months to write three pages,” Bollee said. 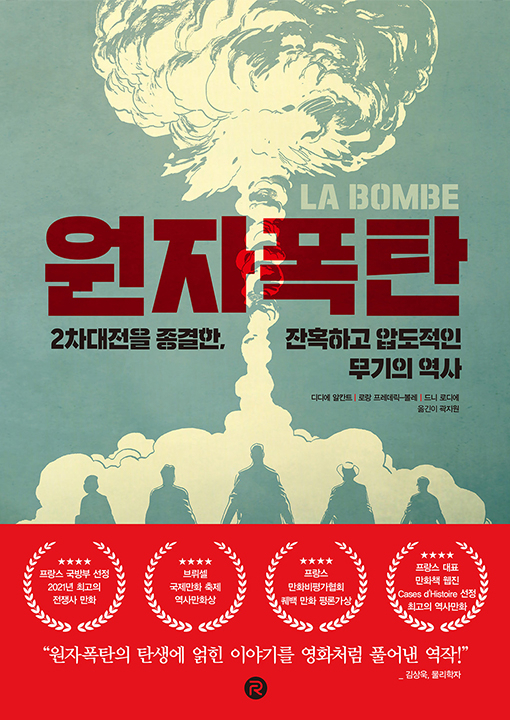 The authors thanked the readers, who considered “Atomic Bomb” to be more than just a graphic novel.

“I heard that many teachers read our book and use if for their class, teaching a little bit about the Second World War. I am very proud of that. People say that ‘Atomic Bomb’ is more like a history book that is used in a school curriculum,” Bollee said.

The French author hoped that the stories will be remembered by reaching a wider audience, while talking about a possible TV series or film adaption.

“The role of a writer is to tell a story. In France, we have a term called ‘memory obligation.’ It means we must remember the serious things. For the young generation, the event happened 75 years ago. They might have heard about it. But if you are 15 years old in France, it’s likely that you did not hear about these things,” the author said.

“We have written this book for our readers to know, to learn, to understand and to forgive,” Bollee added.