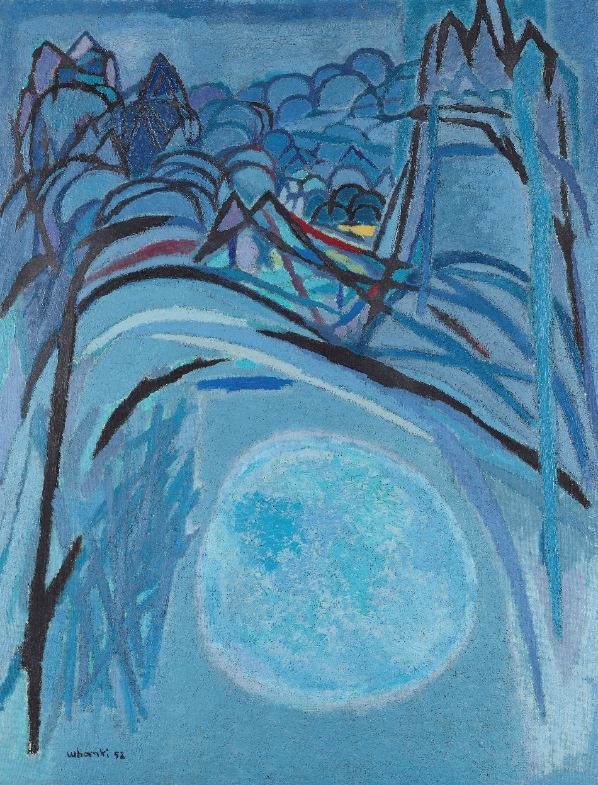 "Mountain and Moon" by Kim Whan-ki (MMCA)
Works of modern art from Korea have traveled to Los Angeles, where they will be shown at the Los Angeles County Museum of Art (LACMA) in an exhibition titled “The Space Between: The Modern in Korean Art.”

It is the first show focusing on the history of Korea's modern art to held in a museum in the West. Bringing together some 130 artworks by 88 Korean artists, the show is co-organized by the National Museum of Modern and Contemporary Art, Korea. Twelve of the pieces come from the Samsung Group chairman Lee Kun-hee’s collection bequeathed to the MMCA.

“This project is rare opportunity to introduce people to the modern art of Korea by looking at the influences that drove its development,” said Virginia Moon, an associate curator of Korean Art. “These artworks, never before shown outside of Korea, show how Korean art broke traditional molds to introduce new and borrowed ones amid the grave challenges the country faced during this era.”

The exhibition consists of five sections – "Modern Encounter," "Modern Response," "Modern Momentum," "The Pageantry of Sinyeoseong (New Woman)" and "Evolving into the Contemporary." The exhibition spans the arc of European-influenced art introduced via Japan during the Korean Empire (1897-1910) period and colonial period (1910-1945), American influences during and after the Korean War (1950-1953) and a glimpse into the beginning of the contemporary art scene.

“The Space Between' brings to light an era of profound change in Korean art history, illustrating how encounters and exchanges with other cultures led artists to set out on new creative paths. It is exciting to be able to share this story in Los Angeles, which is home to the largest Korean population outside of Korea,” said Michael Govan, LACMA CEO and Wallis Annenberg Director.

The exhibition is the second in a series of exhibition being organized as part of The Hyundai Project: Korean Art Scholarship Initiative.