The National Museum of Modern and Contemporary Art, Korea will shed a light on the artist in an exhibition through 90 of his works, with “Chicken and Chicks” and “Children Playing in the Water” unveiled to the public for the first time. The exhibition is the national museum’s second show to present the collection of the late Samsung Group Chairman Lee Kun-hee. Lee’s family donated 1,488 works to the museum last year. Among the 90 works on display, 80 works are from Lee’s donated collection and 10 works are the museum’s own. 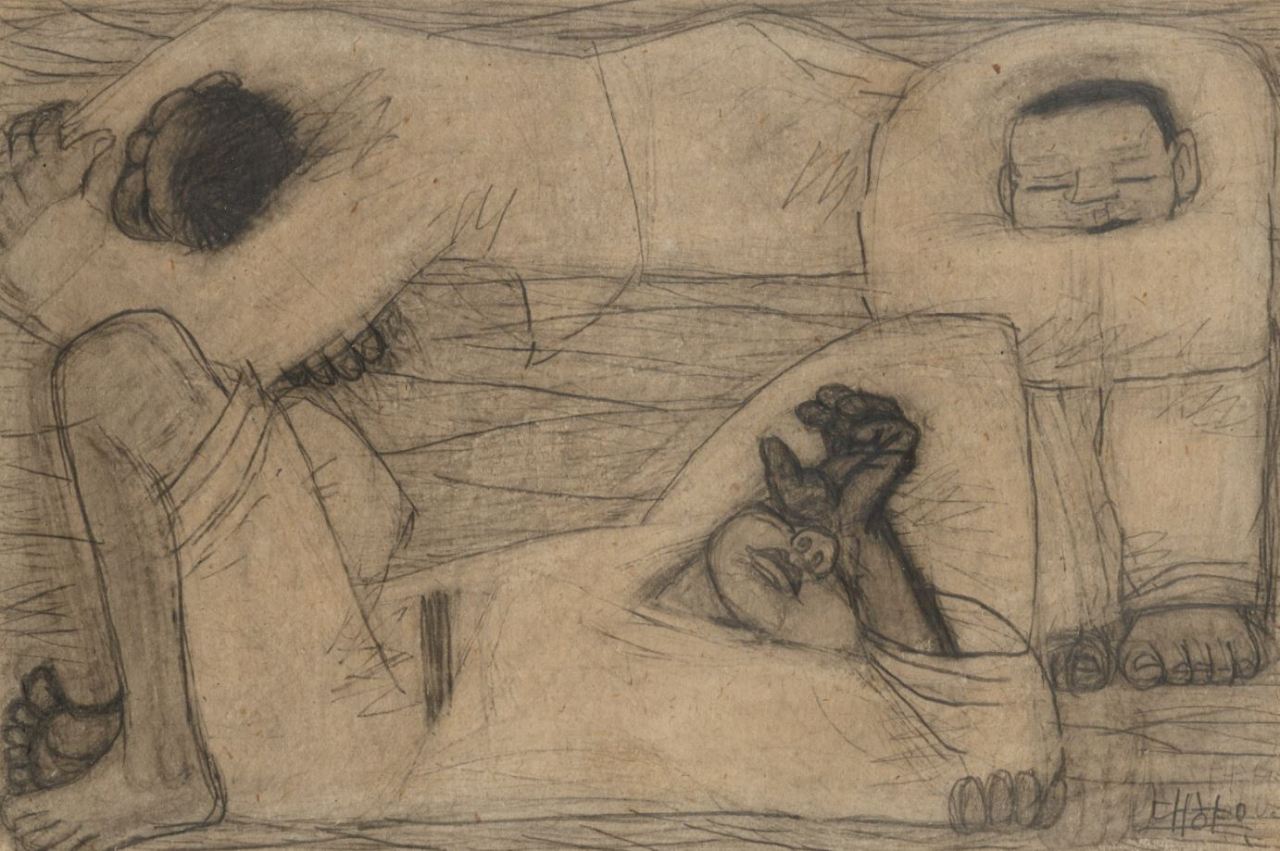 "Three People” by Lee Jung-seop (MMC)
The oil paintings, drawings and tinfoil paintings evoke Lee Jung-seop’s nostalgia for his family and are a testimony to his desperate struggle to overcome a difficult time as an artist with a family to support during the Korean War (1950-1953). Lee Jung-seop met his Japanese wife Yamamoto Masako -- whose Korean name is Lee Nam-duk -- in Japan, where he studied art from 1936 to 1941 during the Japanese colonial era. They fell in love, and tied the knot against all the odds and challenges that lay ahead of them.

Soon after the Korean War broke out in June 1950, Lee Jung-seop’s family had to move around the country for safety. They wanted to stay together no matter what. In 1952, however, Lee and his wife had to make an unavoidable choice to survive – his wife and her sons left for Japan. Lee regularly sent letters with adorable drawings to his beloved wife and sons in Japan until Lee died alone in 1956 in Seoul, suffering from hepatitis. His wife is still alive in Japan.


The postcard drawings are on display at the exhibition along with tinfoil paintings that the poor painter started to explore after he sent his family to Japan. On aluminum paper he got from cigarette packaging, Lee created outlines using steel pencil or nail pressing down on the aluminum paper; then used umber pigment or ink to rub with cotton wool or piece of cloth to highlight the outline. The tinfoil paintings became one of his unique and significant works in his career.

The last part of the exhibition would come as the highlight of the show where viewers can feel Lee’s irresistible yearning for his family in Japan. The oil paintings by Lee from the 1950s that show reminiscence of the time spent with family in Jeju Island and Busan embody his lonely and sorrowful emotions. The oil paintings from the 1950s include “Father and Two Sons,” “Dancing Family,” and “Family,” which were part of collection by Lee Kun-hee.

“We categorized his works into the 1940s and 1950s; but many of works from the 1940s are left in North Korea. Lee left works to his mother in Wonju, which is now North Korea, before coming to Busan with his wife and sons during the Korean War. Not many of his works from the 1940s are left in South Korea, except for those Lee gave to his wife, including postcard drawings,” said curator Woo Hyun-jung.

The exhibition opens Thursday and run through April 23, 2023, at MMCA Seoul in central Seoul.