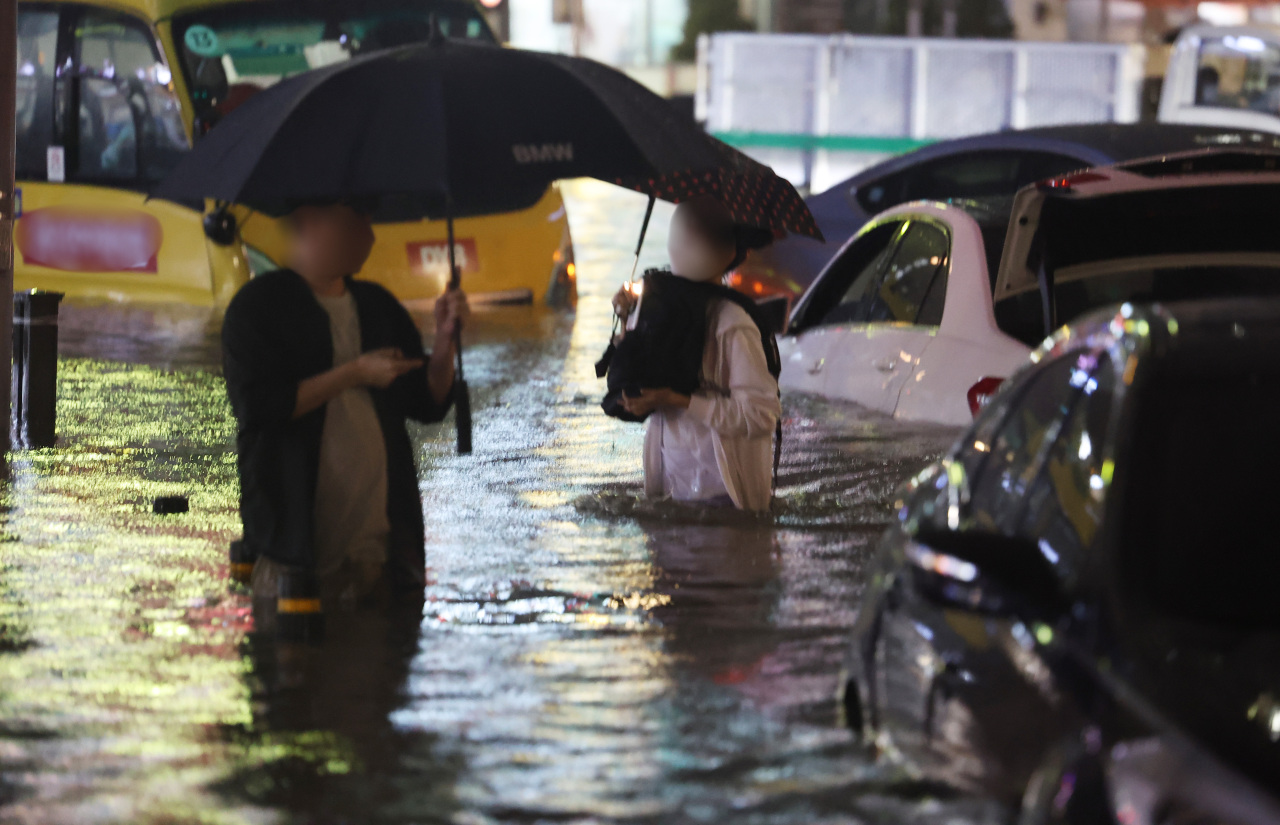 Here are some of the viral photos and tweets from the chaotic evening.

1) Identity of the “Seocho-dong guru” remains in mystery 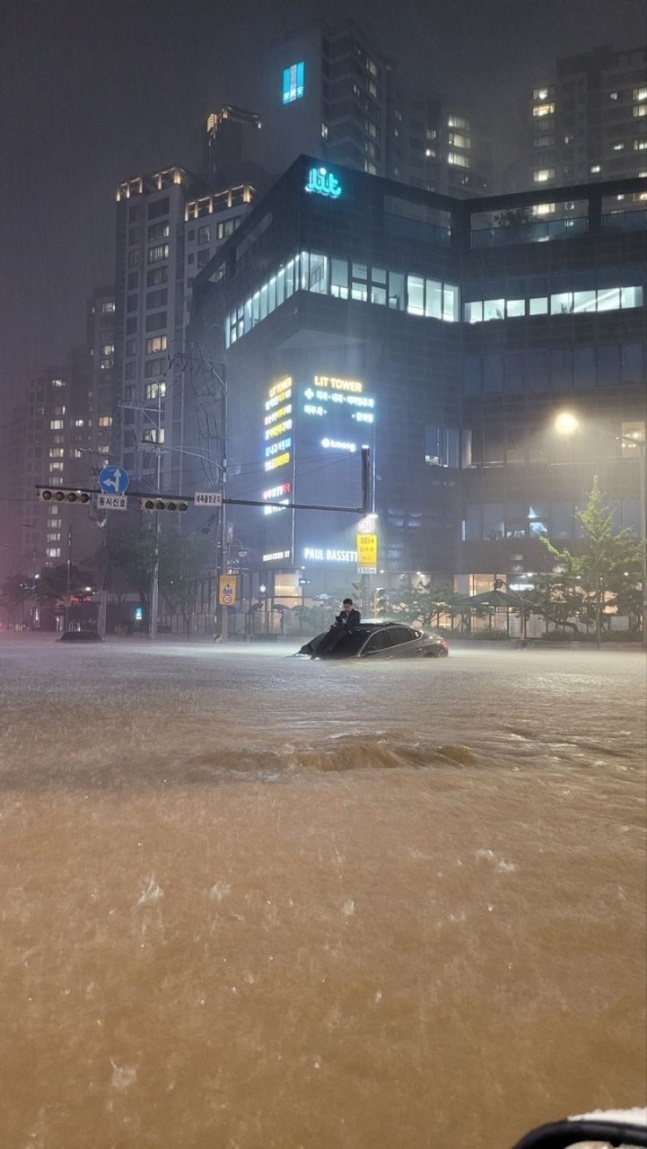 A man wearing a suit and using his smartphone while sitting on the roof of his submerged car in Seocho-dong, Gangnam-gu, shocked many on Monday evening. The exact situation is unclear, but the man’s seemingly-calm demeanor despite the surrounding mayhem has earned him the nickname “Seocho-dong guru.”

Rumors spread that the man was a journalist from a local news agency, but his identity has not been confirmed. One journalist pinpointed by social media users as the person in the picture denied it was him on top of the submerged car.

2) The Good Samaritan of Gangnam

This man earned praise on social media for his “heroic act” and caring about the safety of the community amid the pouring rain.

Late Monday, the photo of him cleaning up a storm drain emerged, with an explanation that he removed much of the garbage that was clogging the drain near Gangnam Station.

“Thanks to him, the knee-high water was drained quickly. He is a Superman,” the person who uploaded the photo said. Soon after, people online dubbed him “Gangnam-gu Superman.”

An controversy broke late Monday when Park Kang-soo, the district mayor of Mapo-gu, western Seoul, posted a photo of him and his employees enjoying dinner around 8:48 p.m. A flood warning had been issued for Mapo earlier in the day.

With several pictures of him eating jeon, a Korean style pancake which is traditionally enjoyed on rainy days, he wrote on Facebook: “It’s a rainy Monday evening after work and I am having dinner with the staff. It’s so good♡.”

Park deleted the post after the dispute and posted photos of him visiting a flood damage site instead. 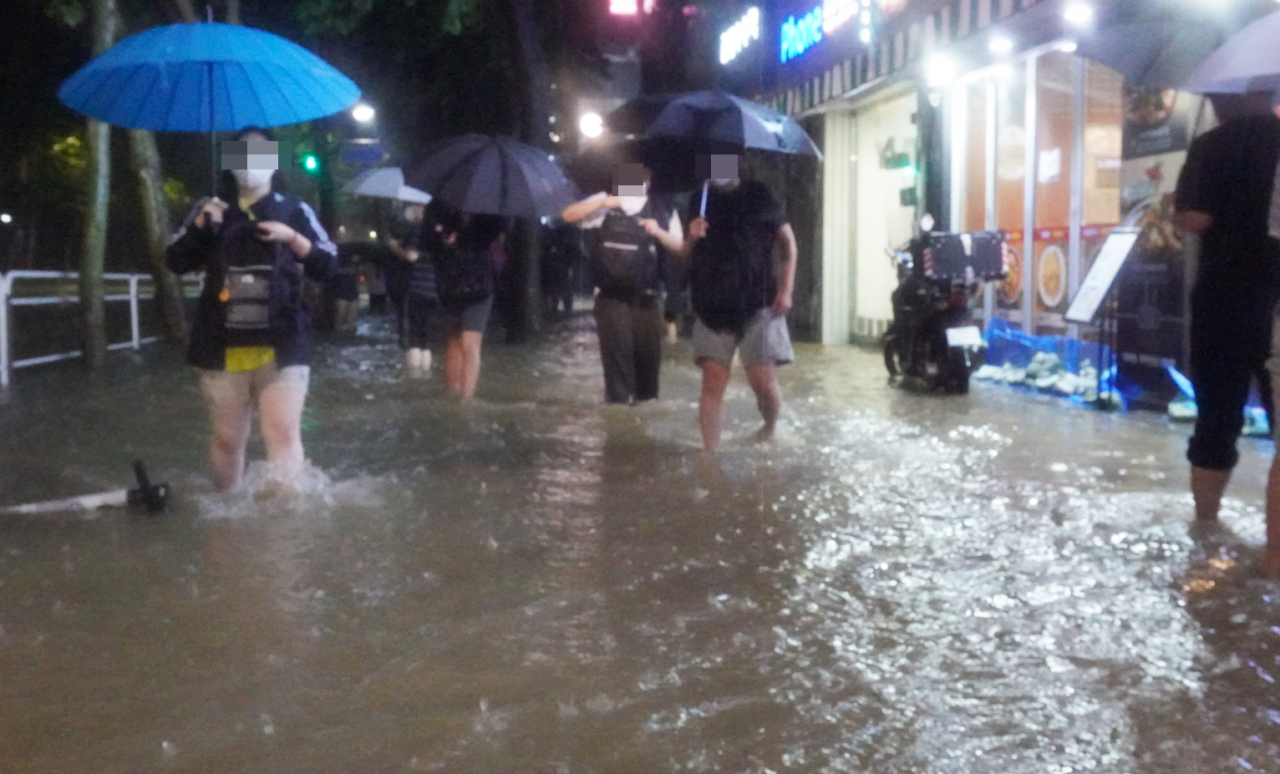 Southern Seoul’s Daechi-dong was one of the heaviest affected neighborhoods by the flash floods on Monday night, with major roads completely submerged. The area is home to hundreds of private tutoring institutes where students study late into the night.

On social media and various online communities, parents who send their kids to hagwons in Daechi-dong shared stories of their eventful nights as they tried to pick up their kids at the end of the night.