SK hynix is supposed to break ground on the 4.15 million-square-meter site in September, but without reaching an agreement with Yeoju City on water supply this month, the project is likely to be delayed, with insiders warning that it could cause cost overruns.

The Yeoju water deal remains the last remaining obstacle SK hynix has to clear in building the nation’s first state-sponsored project. As of June, three years after the government announced the plan, SK hynix had obtained all the required government approvals and reached compensation agreements with landowners who would be affected by the pipeline and the factory.

Under the current plan, the Yongin cluster looks to consume up to 570,000 metric tons of freshwater on a daily basis. Chipmaking requires large volumes of ultrapure water to remove debris during the manufacturing process to prevent the chips from becoming contaminated.

SK aims to allocate about 300 billion won alone to build the pipeline across Yeoju, which is more than 30 kilometers away from the chip factory location.

A Yeoju City spokesperson claimed that the plan affects the city as a whole, since the pipelines would hamper other infrastructure and industrial land development planning.

“(A new chip cluster project) is forcing (Yeoju) to make sacrifices,” Yeoju said in a statement Thursday. “Yeoju is calling for a plan where all parties concerned with the project can coexist, as Yeoju has long been under overlapping regulations and the water to Yongin means an additional layer of limitation to Yeoju‘s development.”

Stretching across Yeoju is Namhan River, one of the two branches of freshwater that forms the Han River in Seoul. The river has been considered a major source of freshwater used for drinking water, farming and industrial purposes, among others.

Commercial and industrial land development in Yeoju has long been strained under regulations aimed at protecting natural resources and freshwater, while some land is also used for farming and military posts. These have restricted companies from setting up or expanding factories in Yeoju. The Yeoju city government has been carrying out a public consultation on the pipeline construction since December 2021. As of June, there were some 113,000 residents in Yeoju.

“Coexistence cannot be achieved through the sacrifice of a certain party,” said Lee, who was elected mayor in June, in a meeting with Gyeonggi Province Gov. Kim Dong-yeon in July. “SK hynix, the state and the Gyeonggi Province local government should not transport freshwater from Yeoju without drawing up a coexistence plan.”

According to industry sources, SK hynix has yet to receive a renewed proposal from Yeoju when it comes to the city‘s development. SK hynix declined to comment.

The tug-of-war cast an uncertain outlook for the country’s first semiconductor manufacturing cluster, involving SK hynix and 50 semiconductor-related vendors, which SK hynix had believed were all set to go later this year.

Should the operation of the Yongin fab start by the late 2020s as planned, Yongin could become one of the major pillars of SK hynix‘s Korean operations.

But the constant delays in the Yongin fab construction appears to be becoming a headache for SK hynix’s plan to address growing demand for memory solutions, considered a crucial part in microchips.

SK hynix President Noh Jong-won said in an earnings call for 2021 in January that SK hynix “should start construction of the Yongin fab as soon as possible,” adding that the company is hoping to begin new fab operations in 2026. 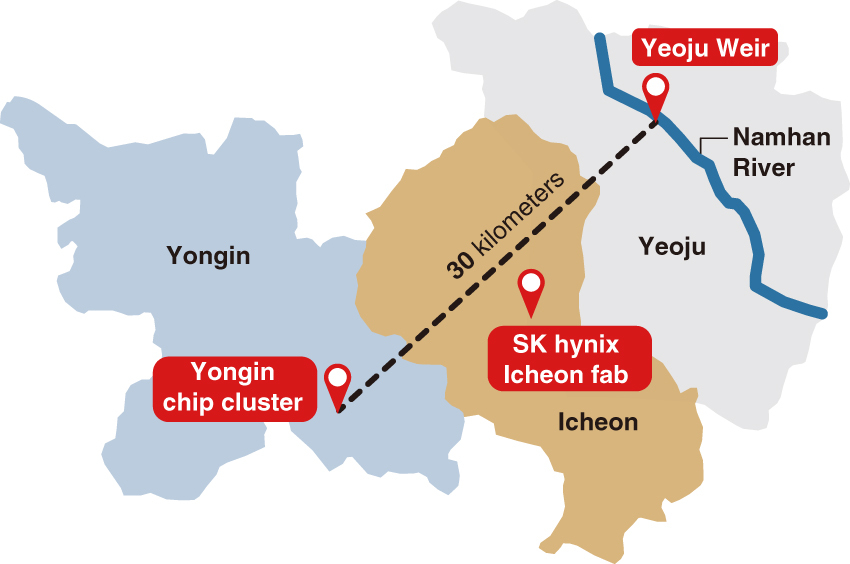 The conflict between chipmakers and the local community has been nothing new in Korea, given the considerable amount of water, electricity and land required to run a semiconductor factory.

It took five years for Samsung Electronics to resolve a conflict surrounding a 23-kilometer power cable from Anseong, Gyeonggi Province, to a new semiconductor manufacturing fab in Pyeongtaek, Gyeonggi Province.

Landowners along a 1.5-kilometer-long site for cable construction called on Samsung to build a tunnel and bury the cable underneath, citing safety concerns. Samsung and the landowners were able to reach a compromise after Samsung agreed to pay an additional 75 billion won for changing the plan.

Such conflicts have come under a renewed spotlight, as the nation has sought to place its policy focus on semiconductor chips. Korea‘s own version of the Chips Act came into force Thursday, while lawmakers drew up the new bill to ramp up support for the chipmaking industry, including plans to triple tax credits to companies investing in chipmaking infrastructure.

During the lawmakers’ presentation of the new bill to government officials on Monday, lawmakers picked Yeoju‘s water dispute as an example of how a lack of pangovernmental effort is hampering the growth of the local chipmaking industry.

“A giver falls victim to (a limitation of land development), while a taker relishes the boost in local economy, so local governments involved in the issue should put their heads together,” said Rep. Kim Yeung-shik of the ruling People Power Party on Monday.