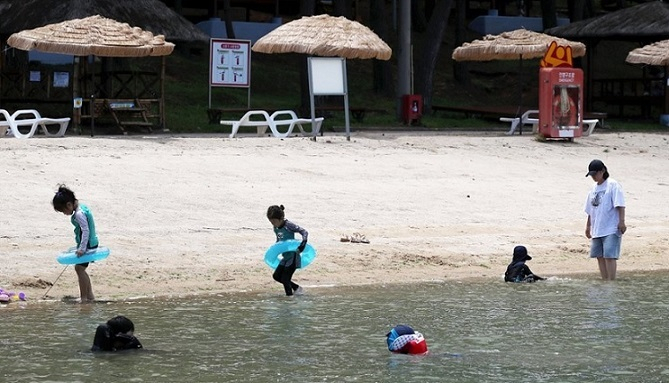 With the end of the rainy season approaching, the state weather agency on Monday issued a heat wave advisory for Seoul and almost all parts of the country, excluding Jeju Island and inland mountain areas.

The Korea Meteorological Administration (KMA) said the heat wave advisory takes effect in Seoul, Busan and all major cities nationwide as of 11 a.m.

Such an advisory is issued when the maximum sensible temperatures are expected to exceed 33 C for two or more days, or when severe damage is expected from the heat.

In particular, the KMA put the southeastern city of Daegu and three adjacent North Gyeongsang counties -- Uiseong, Yecheon and Chilgok -- under a heat wave warning, which is issued when the maximum sensible temperatures are forecast to exceed 35 C for two or more days.

The weather agency said this year's monsoon season, which began in late June, will be over by around Wednesday, giving way to the sweltering summer heat, tropical nights and sporadic showers. (Yonhap)