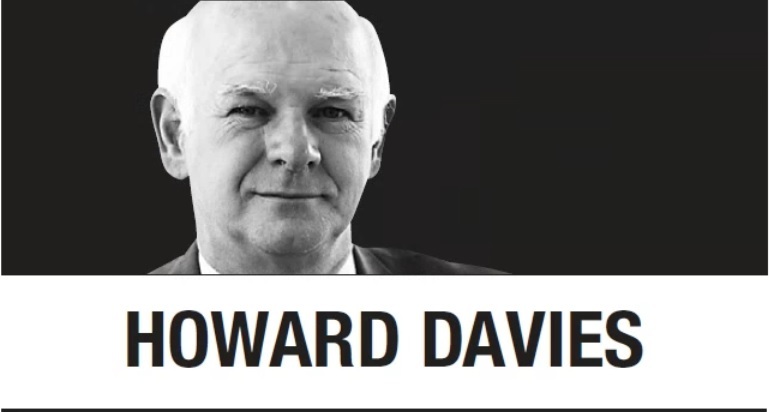 Faced with the horrors of Russia’s invasion of Ukraine, and recognizing the limited military options open to them, Western governments understandably deployed their economic and financial arsenal. Such sanctions have been imposed on errant countries before, of course, with varying success, but not to anything like the same extent as against Russia now.

Notably, the United States and its allies seized much of the Russian central bank’s foreign-exchange reserves, and cut off some Russian banks’ access to the SWIFT financial messaging system for international transactions. The world has learned a new word -- “deswifting” -- and the financial system has been weaponized as never before.

It is too early to assess the impact of the sanctions against Russia; there is no sign yet of a decisive effect on Russian President Vladimir Putin’s regime or its policies. But the longer-term damage to Russia’s economy will probably be considerable.

At the same time, the consequences of the current Western-led sanctions will not be limited to Russia and Belarus, their direct targets. Other countries are asking whether they, too, might find themselves cut off from the dollar-based financial system if their governments cross a US red line. Saudi Arabian policymakers are concerned, and China has been anxious for some time about its vulnerability to US financial sanctions.

I do not know whether there is a Mandarin ideogram for deswifting. But Zhou Xiaochuan, the former governor of the People’s Bank of China, has talked about the risk to China of US sanctions, and advocated defensive measures to increase the use of the yuan in global markets. Others have openly asked whether any Chinese move against Taiwan would trigger similar sanctions from the West.

In recent years, China has taken steps to mitigate this risk. For example, it has established its own Cross-Border Interbank Payment System, which has the same messaging format as SWIFT, to offer cross-border yuan settlement among its members. CIPS has grown rapidly, with some active participation from major Western banks, although the volume of transactions processed through it before the Ukraine war was still less than 1 percent of the SWIFT volume. While that number will likely increase as Russian banks cut off from SWIFT seek to use CIPS as a substitute, their transaction volumes will be too small to make a significant difference.

Although CIPS has so far not seriously threatened Western payment systems’ global hegemony, China’s development of the digital yuan could have a greater impact. Many central banks are exploring the possibility of introducing a digital currency. Sweden, where cash is rapidly disappearing, is further advanced than most. But among the bigger economies, China is ahead of the game. The Bahamian “sand dollar” can lay claim to being the world’s first fully digital central bank currency, but one suspects it will not seriously rival the greenback.

Western central banks are moving cautiously on digital currencies. There are technical issues to resolve, as well as serious privacy concerns. Citizens may not welcome the idea that the central bank can monitor every penny they spend. Those considerations do not much concern the PBOC. A recent Hoover Institution report on the prospects for the digital yuan describes it as “a staggering enhancement of authoritarian control.” But, from a Western perspective, the international implications are more serious than the internal control issues.

Chinese leadership in digital currencies could significantly increase cross-border use of the yuan, and countries participating in China’s Belt and Road Initiative are now being “encouraged” to use it. The Hoover Institution report, written just before the war in Ukraine, argues that the ability of the US to wield financial sanctions effectively would be diminished if China succeeds in promoting, through its digital currency, the “yuanization” (another new word to me) of global trade flows.

The US is well ahead in the development and promotion of private cryptocurrencies -- speculative vehicles with high transaction costs that offer the prospect of higher returns for savvy speculators. China, on the other hand, leads in cheap payment systems that reduce the cost of cross-border transactions for individuals and businesses in the real economy. There could be a lesson there.

The death of the dollar has been predicted many times, of course, and though the greenback’s share of global foreign-exchange reserves has fallen from 71 percent in 2000 to just under 60 percent today, there are currently few signs of its demise. But the increased use of financial sanctions as a weapon of war has created a new incentive for China and other countries to explore ways to minimize the impact in the event that similar measures are used against them. The longer term consequences for the global financial system could be far-reaching.