Samsung Electronics said the solid chip demand for servers and high-end applications, as well as strong sales of the Galaxy S22 Ultra, which started replacing its Note lineup this year, dwarfed macroeconomic uncertainties and supply chain issues due to Russia’s invasion of Ukraine and pandemic lockdowns in China.

The first-quarter consolidated revenue of Samsung came to 77.78 trillion won ($61.48 billion), up 19 percent from a year prior, while operating profit rose 51 percent to 14.12 trillion won. Both figures were close to meeting analyst expectations, according to domestic market intelligence firm FnGuide.

The quarterly revenue of Samsung’s semiconductor chip division hit an all-time high at 26.87 trillion won, up 39 percent on-year. That of the division overseeing mobile gadgets and home appliances came to 48.07 trillion won, the highest since 2013.

In particular, it saw an upshot in memory chip sales thanks to the slower-than-expected memory chip price decline propped up by a solid demand for servers in data centers. This comes as more companies rush to set up a new infrastructure suitable for their artificial intelligence applications globally, Samsung said. However, a one-off special incentive and mild seasonality effects in some of the memory chip applications have caused a slight profit decline, it added.

“Companies are also increasing its IT infrastructure investment. At the same time, many cloud service providers are increasing their investment, as they move into new business areas such as AI and machine learning,” Han Jin-man, executive vice president of semiconductor business in charge of memory chip operations, said in an earnings call Thursday.

The server demand will continue to stay robust despite uncertainties in the market, he added, as memory oversupply is unlikely due to operational constraints in the increase of server chip supply, such as a need of bringing in the cutting-edge memory chips and processors that work with them.

“Given that the strong server demand is backed up by fundamental demand drivers, I think there isn’t much high possibility of being excessive in memory inventory buildup,” Han said. 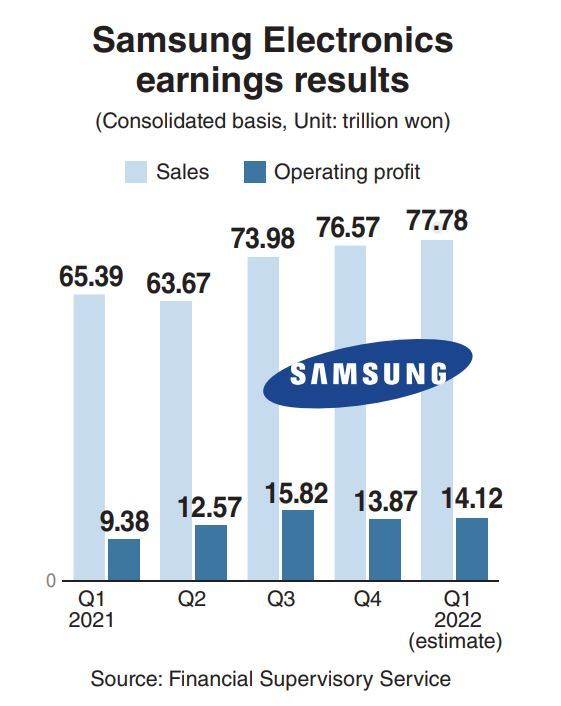 As for its mobile business, the strong sales can be attributed to the debut of its Note successor, the S22 Ultra, and the launch of midrange 5G phones. There were also strong sales of wearables and tablets, which make up the rest of the Galaxy ecosystem and allows a multiple-device experience for the user. Samsung said it looks to leverage its global supply chain management capability to overcome uncertainties, mainly through long-term contracts with component suppliers, in order to attain a double-digit growth in the division.

As a result, the supply chain constraints will start to resolve starting in the second quarter, said Kim Sung-koo, vice president in charge of Samsung’s mobile business.

Samsung Electronics is the largest memory chip maker by sales and the second-largest chip contract manufacturer in the world following TSMC. Also, Samsung is the largest mobile phone maker by shipments, but stands at No. 2 in terms of sales, according to Counterpoint Research.

In the meantime, Samsung said favorable currency exchange rates resulted in a 300 billion won windfall on operating profit compared to the previous quarter, as the strength in the US dollar against the Korean won outweighed the weakness in some emerging currencies.

For the first quarter, Samsung Electronics set aside a combined 2.45 trillion won to pay dividends to shareholders, or 360 won apiece for both common shares and preference shares.