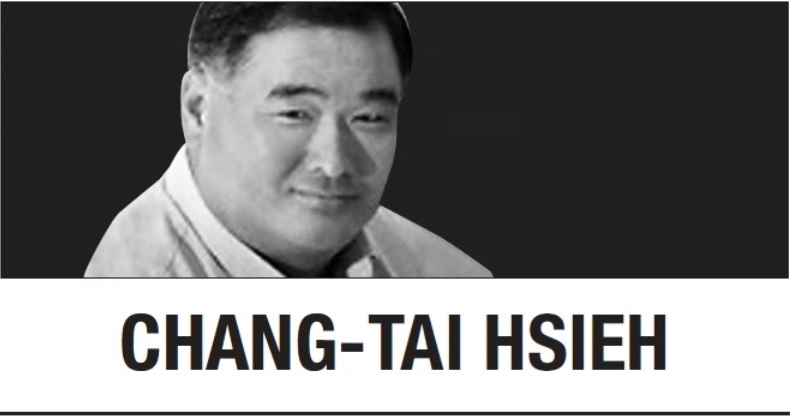 In the same week that Taiwanese took to the streets to repudiate Russia’s invasion of Ukraine, Taiwan’s leaders rolled out the red carpet for a visit by former US President Donald Trump’s secretary of state, Mike Pompeo. This is the same man who, together with Trump, withheld military aid from Ukraine to pressure its government to initiate a bogus investigation into Joe Biden’s son, and who then fired the US ambassador to Ukraine when she refused to go along with the extortion attempt.

The jarring juxtaposition of these two events -- the Taiwanese people supporting a fellow democracy while their leaders lavished praise on the man who undermined that democracy’s security -- reflects a reckless willingness to embrace any foreign politician who will “stand with Taiwan.” Taiwanese leaders are focused so intently on gaining international recognition that they ignore the key threat Taiwan faces: an invasion by China similar to what Russia has done in Ukraine.

Taiwan’s development over the past few decades has been truly miraculous, even in a region with some of the most successful countries in the world. Within the span of a generation, Taiwan has grown from a poor, primarily agrarian society with an authoritarian regime into a vibrant democracy boasting some of the world’s most important companies, such as Taiwan Semiconductor Manufacturing Company. Even more remarkably, this transformation occurred in the absence of formal diplomatic ties or participation in international organizations such as the United Nations.

Taiwan’s poor choice of friends is not limited to American politicians. When multilateral lenders cut off Nicaraguan President Daniel Ortega’s corrupt regime following its brutal crackdown on protesters, Taiwan stepped in with a $100 million loan to the dictator. And in November 2021, Taiwan hosted then-Honduran President Juan Orlando Herandez, even though it was widely known that Hernandez was involved in drug trafficking (in March 2022, he was indicted on federal drug charges in the US). Both Nicaragua and Honduras belong to the small minority of UN member states that formally recognize Taiwan as a sovereign country.

Obviously, Taiwan cannot be both a beacon of democracy and a financier of “white terror” operations in other countries. It cannot claim to stand with the world’s democracies if it is also going out of its way to support US politicians who have threatened and undermined democratic regimes both abroad and at home. Such behavior not only betrays the democratic ideals that Taiwan stands for; it also ignores the threat that Taiwan faces from China.

That threat outweighs all others. The central goal of Taiwan’s foreign policy, therefore, should be to deter China from pursuing the kind of reckless aggression that Russian President Vladimir Putin has launched in Ukraine.

For Taiwan, effective deterrence has two components. First, China must be made to understand that it would pay a high price -- militarily, economically, and diplomatically -- were it to invade. Taiwan and the rest of the world’s democracies must make it absolutely clear that the day China invades Taiwan would also be the day China gives up on Deng Xiaoping’s program of “reform and opening up.” Second, Taiwan must avoid actions that would put Chinese leaders in an impossible situation. Specifically, it must not formally declare its independence or seek to secure membership in the UN.

Deterrence has been effective so far, but it now faces two major challenges. First, America’s own strategic disengagement from China may eventually lead Chinese leaders to conclude that they have little to lose -- at least in terms of China’s ties to the rest of the world -- by taking Taiwan by force. Although there is not much that Taiwan can do about the battle between the two superpowers, it should think twice before embracing US politicians whose only interest in Taiwan is to use it as a cudgel against China.

The second challenge comes from Taiwan’s push for formal recognition. A critical part of deterrence is to avoid actions that would give China an excuse to attack. UN membership or formal diplomatic recognition by the US would be viewed as a step on the path to formal independence. That could force China’s hand, because no Chinese leader could survive if he did nothing in response to such a step.

Pompeo’s statement of support for formal diplomatic ties between the US and Taiwan is thus extremely reckless, as is the Taiwan leadership’s decision to give him a platform to disseminate that message. The strong ties between Taiwan and the US would not be made any stronger if Taiwan’s representative office in Washington, DC, were to change its name to “Embassy of Taiwan.” On the contrary, formal diplomatic recognition would leave China no choice but to sever ties with the US, an outcome that would ultimately endanger Taiwan.

Taiwan’s most important international relationships are with Japan and the US, neither of which has formal diplomatic ties with the island. The strength of these relationships is rooted in trade, business ties, and millions of people-to-people exchanges. These are what matter -- not UN speeches or 21-gun salutes during formal state visits. Taiwan must not confuse the trappings of nationhood with the reality of nationhood. It should focus on strengthening a status quo that has enabled it to prosper, and it should politely decline future overtures from craven opportunists and authoritarians.