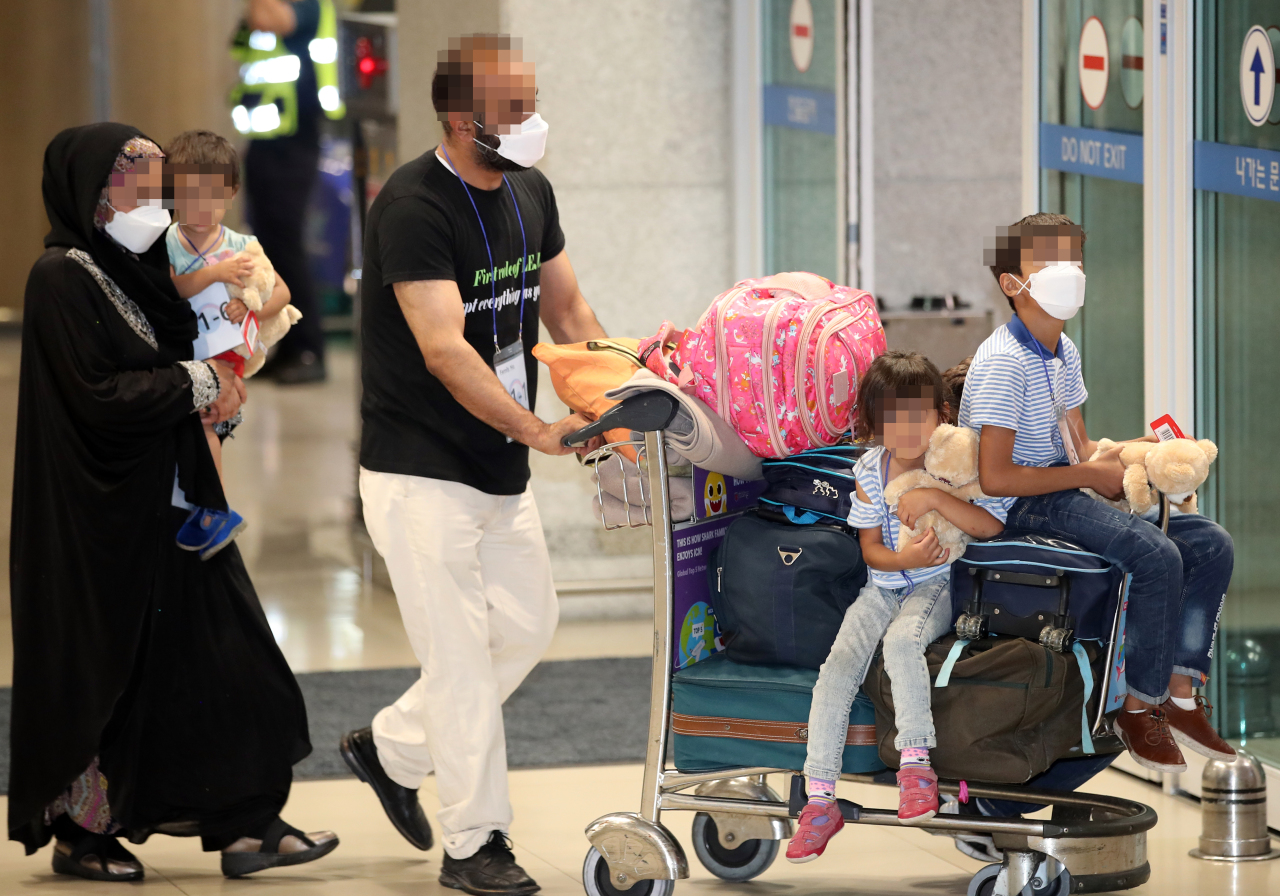 Afghan allies who have worked alongside the Korean government and their families arrive at Incheon International Airport on Thursday. (Yonhap)


A military jet carrying 378 at-risk Afghans who worked alongside the Korean government arrived in South Korea on Thursday, as part of Seoul’s mission to evacuate civilians fleeing the Taliban takeover.

The evacuees on board the KC-330 tanker transport plane touched down at Incheon International Airport at 4:24 p.m. on Thursday, after leaving the Pakistani capital of Islamabad earlier in the day, according to the Foreign Ministry.

Another plane, carrying 13 remaining people from the group, left Islamabad and is expected to land in Korea on Friday afternoon. They were unable to board the first plane due to a lack of space.

All the arrivals will be tested for COVID-19 at the airport and wait in a separate accommodation near the airport until the test results are back. Those who are confirmed negative will head to a government-designated facility in Jincheon, North Chungcheong Province, for a total of six to eight weeks, including a mandatory two-week self-quarantine.

In the rescue mission code-named “Operation Miracle,” South Korea dispatched three military jets earlier this week, a KC-330 tanker and two C-130 planes. They transported a total of 391 Afghan “allies” -- those who worked with Korean entities and their families -- who are vulnerable to potential Taliban retaliation.

The evacuees are translators, medical personnel, engineers and staffers who have worked for years with the Korean Embassy in Afghanistan, as well as Korea-led reconstruction efforts, including at hospitals, vocational training centers and provincial reconstruction teams.

About half, or around 180, of the total evacuees are under the age of 10, including 100 infants, according to a defense ministry official. They make up a total of 76 families.

South Korea has stressed a “moral responsibility” in bringing the Afghans here, given the “serious situations” many of them face, Second Vice Foreign Minister Choi Jong-moon said Wednesday, as they could be persecuted by the Taliban for working for foreign governments.

The mission marks the first time that Seoul has evacuated a large group of locals from a conflict zone for humanitarian purposes.

An Afghan woman, who worked at the Korean Embassy in Kabul for about two years, expressed gratitude to the Korean government for evacuating her and her family.

“It was not an easy decision, but I had to because of saving my family,” the evacuee said in a video interview provided by the Foreign Ministry. “I just can say thank you.”

Another evacuee, who worked with the embassy for two years, decided to flee due to the danger he and his family face for working with foreign governments.

“Taliban take all of Afghanistan and they are trying to find who worked (with) foreign countries,” he said, speaking in English. “It’s dangerous for me and my family.”

He described the arduous journey of reaching the Kabul airport amid the precarious situation on the ground, and thanked the Korean government for “trying hard nights and days” to bring them inside the airport so they can evacuate.

The evacuees will not be entering Korea as refugees, but as “persons of special merit.”

The Afghans will initially receive short-term visas valid for up to 90 days and then switch to long-term visas later. Eventually, they can apply for F-2 residential visa, which allows them to work here.

All arrivals underwent background checks before departure, but the government will verify their identities again due to public concerns over security.

Seoul’s evacuation mission comes as the US and other countries are scrambling to evacuate their own citizens and Afghans, ahead of an impending Aug. 31 deadline the US has set to complete the withdrawal of its forces from the country.

Seoul temporarily shut its embassy in Kabul on Aug. 15 and evacuated embassy personnel and Korean nationals as Taliban forces entered the capital city and effectively took control of the country, ousting the Afghan government.