SEOUL, South Korea, June 17, 2021 /PRNewswire/ -- Hyundai Mobis (KRX: 012330) announced on 17th that the company had developed 'lighting grille' technology, which implements an LED lighting function in the front grille of the car. This helps determines the first impression, and also integrate the other new 'grille integral active air flap' technology. These are new technologies that have not yet been mass-produced worldwide. They are rated as the outcomes of differentiated R&D efforts in response to the trending change for electric vehicles and autonomous vehicles. 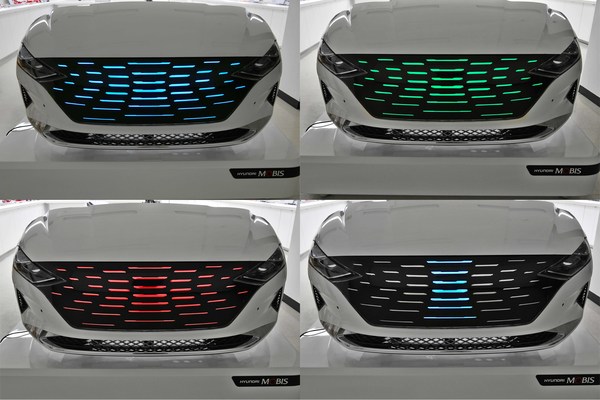 The core of the new grille technology, developed by Hyundai Mobis, consists of the 'lighting grille' and the 'moving grille.'

Over the years, the automotive grille has been regarded as a vent for cooling the engine and as a design element that determines the first impression of the vehicle. However, as electric vehicles have been becoming more popular in recent years, the existing grille is being transformed to have different uses including lighting systems, sound systems and displays.

For starters, Hyundai Mobis' 'lighting grille' is a technology that can use the entire front grille of the car as a lighting device. It is characterized by being able to implement various scenarios such as the autonomous driving mode, the EV charging mode, the welcome light function, the sound beat display, and an emergency warning light display.

The 'lighting grille' can be used as a means of communicating with other vehicles or pedestrians and it can also create strong and unique design effects depending on how the lighting patterns are applied.

Hyundai Mobis completed development of the technology earlier this year, and it is now verifying its reliability for commercialization purposes. After next year, the company is planning to start mass-production through customer promotion.

The 'moving grille' technology, also developed by Hyundai Mobis, automatically controls the outside air to cool the engine as the grille moves and provides the lighting function as well. Unlike the existing method (built-in), as this has been developed as a grille integral type (external), it is expected to not only improve fuel efficiency and reduce exhaust gas, but also realize a sense of luxury in the exterior design of the vehicle. The built-in air flap, located inside the automotive grille, detects changes in the temperature of the coolant and blocks the inflow of outside air by lowering the flap if cooling is not necessary.

If this device is applied to a vehicle, it can improve fuel efficiency as it reduces air resistance (if outside air is blocked) and reduce the emission of pollutants through the exhaust gas by improving the cooling efficiency inside the engine room. The advantage of the grille integral (external) air flap is that it can implement differentiated design patterns through its lighting while also enhancing the eco-friendly effect.

"We are making constant efforts to develop new technologies that can meet customer needs in response to the changes in future car trends," said Lee Woo-il, head of the Module Lab of Hyundai Mobis. "We will preempt the global market with innovative products that combine a high level of technology readiness with emotional quality."

Hyundai Mobis also developed a virtual engine sound system utilizing the automotive grille as a global first last year. If this technology is applied to vehicles, it can be used not only for the virtual engine sound, but also as the turn signal sound, the electric vehicle charging alarm sound, and speakers for playing music while camping.

Mobis currently has more than 30,000 employees and has been manufacturing in more than 30 regions in 10 countries. In addition to its R&D headquarters in Korea, Mobis has 4 technology centers in Germany, China, India and the United States.