In celebration of this week’s comeback, we put together 50 tracks representing best of BTS 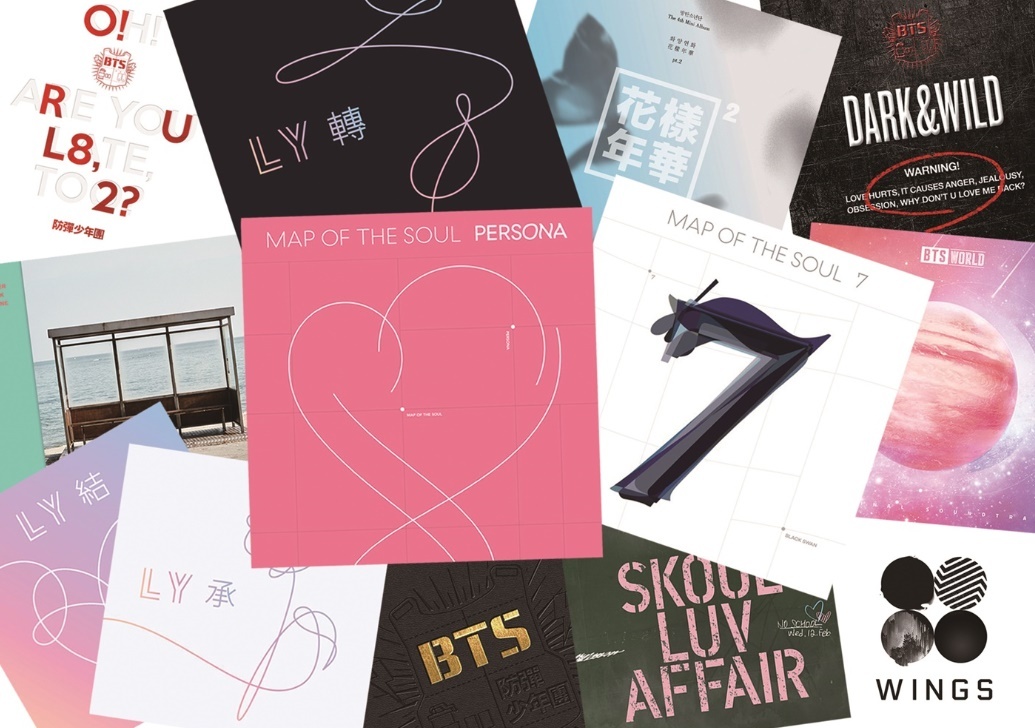 The R&B track from “Love Yourself: Tear” keeps things simple and brings back the memories of 2000s R&B.

J-Hope, Jin and Jungkook teamed up in a rare occasion for this dramatic song that takes an edgy turn a third way through.

As the title suggests, the light-hearted and playful tune was inspired by the character from the popular anime series “Anpanman.” Rather than siding with the likes of Batman, it’s endearing that BTS opts for the more relatable Anpanman.

Full of rapping and a smooth chorus, the song lives up to the title as the group go through a list of household names in the hip-hop world from Jay-Z to Eminem.

Sometimes, sweet melodies and harmonious singing are enough to keep your ears pleased.

Cheesy as it may be, once you look past the questionable pun that borders on a dad joke -- “So I call you illegirl” – in the chorus, you can see the song as the rhythmic bop that it is.

On top of self-reflective lyrics, elements of polished electropop and head-bopping beats, you get to hear in this earworm the elongated chorus, “Lost my way, eh, wa-a-a—a-ay.”

Charli XCX joins Jin, Jimin and Jungkook for the dreamy and psychedelic track

BTS’ version marks the first official remake of the song in 22 years since its original release. And the 2017 version was given a trendy electronic trap makeover while maintaining the original version’s heavy bassline and strong beats.

Following the J-Hope’s solo track of the same title, the Latin-inspired swanky track sees the group’s playful side as they talk about their lives traveling around the world in an airplane from “New York, California and London to Paris.”

Long before “Ok Boomber” took the internet by storm in 2019, there was “N.O” which stands for both “No Offence” and “No” in the lyric “Everybody say no.” The song taps into the youth’s anger and encourages them to break free and pursue happiness instead of caving into the pressure from older members of society

RM and Suga teamed up with American rapper Juice Wrld for the third single from “BTS World: Original Soundtrack” – mid-tempo and laid-back with feel-good vibes.

Apart from a similar title, the 2014 track is nearly the polar opposite of the 2019 hit single “Boy With Luv.” While the latter puts on a soft front, “Boy In Luv” sees the group come across as more rough around the edges as they sing, “Say what you want.”

While rich in percussion, this funky track with romantic lyrics from “Love Yourself: Tear” has a secret weapon – a lethally beautiful flute hook.

The title track from “2 Cool 4 Skool” sees the bandmates rap straightforward lyrics urging listeners to muster up the courage to go after their dreams. The politically charged message

Co-written by Ed, the second single from the sixth EP “Map of the Soul: Persona” is a rhythmic R&B tune featuring soft rapping and addictive hooks. Later in the remix version, Lauv replaces the first verse in Korea with his own English lyrics.

“It’s alright, now count one to three and forget, erase all sad memories, hold my hand and smile,” the group cheers you up in harmony as they deliver a message of positivity in the mid-tempo tune.

As per usual with the group’s early work, “Danger” takes a more direct approach to lyrics reflecting frustration and angst over unrequited love while the song take the form of an electropop song with a catch chorus.

Thorough the ups and downs, J-Hope looks back on his journey so far in the self-reflective song. The feel-goodness of the vibrant brass-laden track and the empowering narrative that his experience made him more assured of himself, it’s hard to miss that it’s J-Hope.

Conjuring up images of a winter sea breeze in your mind, the lyrics capture the essence of nature landscapes ranging from deserts to seas.

The first track to be unveiled from the Map of the Soul: 7 samples 2013 track “Intro: O!RUL8,2?” as spotlight is on Suga this time. He talks about the dizzy heights of fame he’s reached through spitfire rap as his shadow looms over. The shadow is one of the four major archetypes that make up Swiss psychologist Carl Jung’s model of the psyche along with persona, ego and self, the first of which influenced the group’s previous album “Map of the Soul: Persona.”
27. Epiphany by Jin

Laden with catchy piano and bass riffs, the string-heavy tune is an emotional roller coaster that gradually reaches a climax and makes for great winter listening.

With popping beats and a silky chorus, it’s hard to resist moving your shoulders up and down to “Best of Me.”

“Intro Persona” is a welcoming throwback to the group’s hip-hop roots during the “Skool Luv Affair” days. While RM does his thing, the gritty guitar riffs do wonders in giving the track a fresh finish.

The emo hip-hop track touches on the emotional power of music. The artistic nature of the song is further delivered by an accompanying art film and carefully choreographed artistic dance moves.

If you are looking for a song to listen to before bed, this solo track by V is the perfect choice. Laden with rich percussion sounds and jazz piano riffs, the sensual song can create an air of melancholy, complete with V’s soothing voice.

This one from the vocalists -- Jin, Jungkook, V and Jimin – puts their signing on full display over emotive piano riffs. And with the heartstring-pulling lyrics on top, the song qualifies as a tear-jerker.

A musically pleasant song with a title from the popular German legend “the Pied Piper of Hamelin” was given a whole layer of meaning, thanks to the lyrics that seemingly explore the relationship between idols and fans.

Co-written by none other than Bang Si-hyuk, also known as Hitman Bang, “Butterfly” is packed with beautiful harmonies and carefully written lyrics. The song begins quietly with acoustic guitar riffs before it gradually develops into BTS’ classic poppy and beat-heavy chorus that makes for easy listening.

Here is Jimin embodying psychedelic pop brilliance in the form of a mid-tempo rhythm and blues tune. The track was first created as an intro on “Love Yourself: Her” before it was released again as a full song on “Love Yourself: Answer.”

On the Greek god of wine-inspired rap-rock track, BTS talks about the joy and pain of creating something with references to drinking.

Want to go for a drive? This straightforward pop-rock number, the lead single from “The Most Beautiful Moment in Life, Pt. 2,” will at a heart-racing pace.

With the help of Grammy-winning producer DJ Swivel, the rhythmic tune with playful lyrics is an instant mood lifter while RM and J-Hope’s quick-witted rap adds a layer of depth.

Laden with traditional Asian instrumental riffs, the playful diss track talks about how far the group has come despite obstacles it faced.

Wonder what Ddaeng means? It’s an onomatopoeic word used when someone gets an answer wrong in a quiz, like the sound of a buzzer.

As the title suggests, the track is high-energy thanks to spitfire and intermittently shouty rap. In the midst of bouncy beats and a generous use of thumping electro synths, BTS manage to get the message across that you should live however you want since it’s your life anyway.

The fifth track from “Map of the Soul: Persona” is a 90’s throwback modernized with trap beats and bright lead synths. It’s all the sweeter knowing that the group meant home is where fans are.

Produced by DJ Swivel, euphoria packs a strong future bass punch with the synth-heavy chorus reminiscent of that of the Chainsmokers’ “Closer.” It might sound generic to some ears but its catchiness is hard to deny.

Joining the trend in pop in recent years with an emphasis on the bridge, BTS launches into a minimalist chorus as they let the slick synths take over.

Judging by the lyrics, the group strikes a personal tone in this one as they sing, “I pulled all-nighters dancing and singing in practice rooms instead of being at school. … While you guys partied, I gave up sleep for my dreams.”

The surefire EDM banger has no shortage of energy. While the group dances to the rather full-on dance sound that incorporates both South African and Korean music, the lyrics touche upon the subject of being idols themselves.

The song is sprinkled with catchy beats and slick electronic drops, replicating the cutting-edge pop sounds. The chorus lyric “You gave me the best of me so you’ll give you the best of you” is a classic example of the BTS message of self-love.

The energetic rap track is packed with popping synths and trap beats – a fitting sound as the band celebrates how far they had come. The lyrics don’t shy away as they mention “billboard” and boasts a bag of trophies. RM said he drew inspiration from former US President Barack Obama’s mic drop at his final White House Correspondents’ Dinner appearance in 2016.

The winter-inspired straight-pop tune has beautiful melodies without getting too soppy, as crisp vocals and clean guitar riffs aided by sentimental lyrics make for easy listening.

The whistled hook, feather-light guitar riffs and the generous use of the pop-drop, what’s there to not like this pop banger? The colorful music video is a must watch, not to mention that the 2017 single secured the group’s first-ever spot on the Billboard Hot 100 singles chart and went on to perform the song at the American Music Awards, marking their first US TV performance.

With the 2019 single featuring Halsey, the group delivered, “Oh, my, my, my” -- a catchy chorus that qualifies as pop perfection. It’s no wonder the radio-friendly tune remains the group’s highest charting single in the US ahead of the release of the “Map of the Soul: 7.”

The musical essence of BTS – genre-bending, emotion-heavy – was brilliantly captured in the 2018 single. The lyrics fall on the darker side as the group questions the authenticity of love in retrospect in passionate vocals while the song skillfully mixes pop, hip-hop and rock over trap beats.