By Son Ji-hyoung
Published : Sept 26, 2017 - 17:11       Updated : Sept 26, 2017 - 17:13
Signs of downward turns in consumption, the domestic economy as well as the financial market seem to be apparent, amid the saber-rattling between North Korea and the United States, which has heightened tension to the degree of a “declaration of war” on the Korean Peninsula.

In light of these factors, stock analysts -- who have maintained their outlook for recovery, citing strong performance in exports -- are shifting their attention to the impact on the domestic economy.

The CCSI this month, based on surveys from Sept. 12 to Sept. 19, came to 107.7, down 2.2 from August, according to data from the Bank of Korea on Tuesday. In August, the index slid by 1.3 from July, when it hit a high in more than six years after climbing for six months in a row. 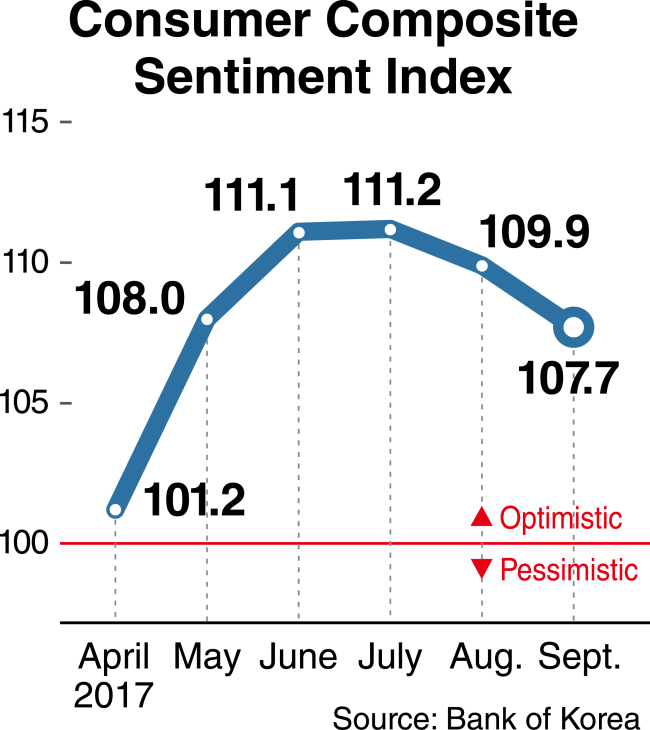 Indexes for consumers’ outlook on consumption as well as views on current and future economic circumstances went lower, leading to the CCSI slump for two months.

“In the past, the geopolitical risks had little impact on the real economy,” he said. “This time, the North Korea risk is lasting longer, triggering negative effects (on the economy).”

The tension between North Korea and the US has also undermined the relationship between South Korea and China, leading to slumps in the domestic economy, Kim Hyoung-ryoul, an analyst at Kyobo Securities, told The Korea Herald.

“While it might be considered a small portion of the real economy, the apparent drop in Chinese tourists to South Korea must have impacted the domestic economy somehow,” he said.


Meanwhile, the main bourse Kospi closed at 2,374.32, down 0.26 percent from the previous day, after North Korean Foreign Minister Ri Yong-ho’s remarks to the press in New York on Monday. Foreign investors net sold stocks worth over 385 billion won on the top-tier market.

Ri has accused the US of “a clear declaration of war” and advocated “all the rights to exercise the self-defense,” while blaming US President Donald Trump for triggering a war of words.