The CCSI reached 111.1 in June, up 3.1 points from the previous month, according to data from the Bank of Korea. This marked the highest since it recorded 111.4 in January 2011.

The index surged for five consecutive months after dropping for three straight months to hit about an eight-year low in January, at 93.3.

For nearly six years, the CCSI hovered at around 100, with the highest being 110, until it dipped to 94.2 in December last year when a corruption scandal that led to the eventual impeachment of former President Park Geun-hye surfaced. A mark above 100 shows optimism while below represents pessimism. 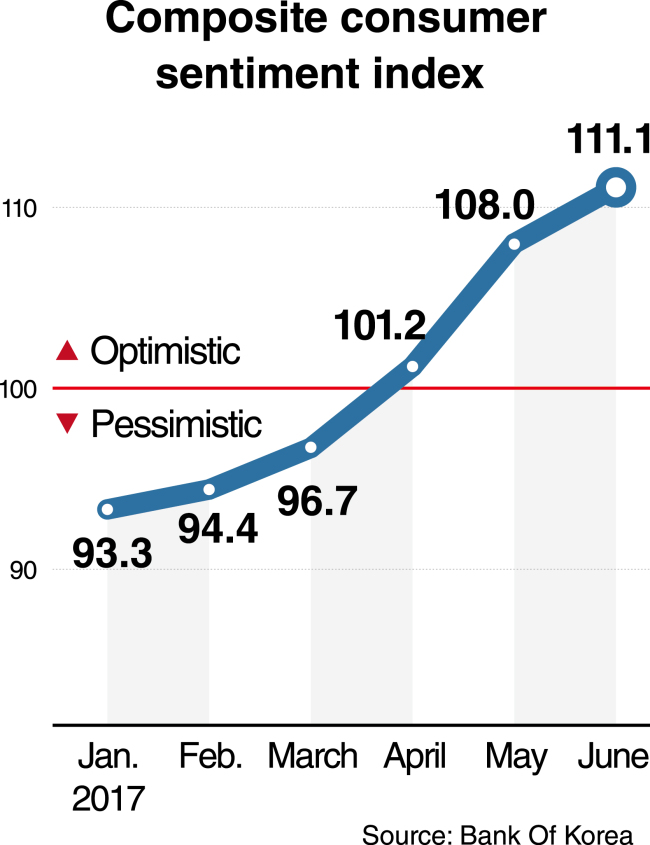 The CCSI comprises six consumer survey indices measuring consumers’ current views on and outlooks for the macroeconomic setting and livelihood, as well as perspectives on household income and consumption. The latest index was based on a weeklong survey of 2,029 respondents across the nation held from June 13 to June 20.

Optimistic views on current economic circumstances in the country mainly drove up the CCSI in June, as it rose to 93, up 11 points from May and 42 from January. The index gauging consumers’ economic outlook stood at 112, up a point from May and 45 from January.

“Performance in exports, the abated uncertainty during the former Park Geun-hye administration and introduction of a new president, as well as the latest bull run in the stock market, drove up the index,” Park Sang-woo, an official at the BOK, told The Korea Herald.

Some Koreans saw the positive sign as not representing their lives.

Choi Gi-won, an advocate for a labor union of part-time job employees, told The Korea Herald the index does not sufficiently reflect the hard lives of part-timers.

“The index indicating the positive economic outlook is isolated from the real lives of part-timers,” he said. “Many part-time employees say to me they still suffer low quality of life, such as a gloomy future and lack of break time during work.”