South Korea's finance minister said Thursday that he has no immediate plan to raise income and corporate taxes, and seek other ways to support President Moon Jae-in's expanded fiscal role in creating jobs and boosting the economy.

"The government is looking into discretionary spending and unnecessary items in terms of government expenditures that can be adjusted and review plans to remove tax exemptions and other benefits," Finance Minister Kim Dong-yeon told reporters after his inauguration ceremony held in Sejong. "I'm not considering raising nominal tax rates, such as corporate and income taxes." 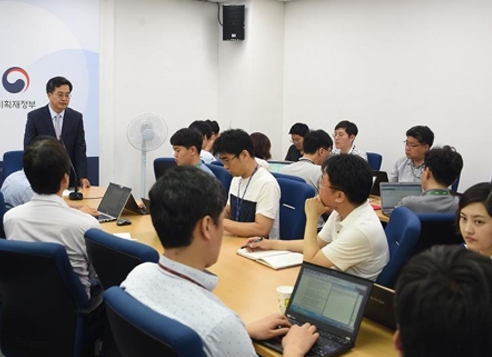 On the campaign trail, President Moon promised to focus more on job creation and expanding welfare for young people. In particular, he said his government will create some 800,000 public jobs during his five-year term, grant an allowance to young jobseekers and offer public residence to newlyweds at lower rent.

To complete his pledges, it is expected Seoul will need an additional 178 trillion won during his five-year term. The president had hinted at a hike in corporate and income taxes, and a removal of tax exemptions and benefits to secure funds.

The finance ministry also said he will make all-out efforts to convince the National Assembly to approve an 11.2 trillion-won extra budget proposal as soon as possible, which is designed to create jobs and give subsidies to young jobseekers.

No state bonds will be issued to cover up the extra budget this year, instead, an excess of 8.8 trillion won in tax revenue will meet most of the outlays.

In order to cool down the overheating real estate market, Kim said the government will come up with comprehensive measures as soon as possible.

"The property market is closely linked with the economy. I'm keeping close tabs on the matter," said Kim, who earlier pledged to take strong measures against property speculations. "The government will draw up detailed scenarios for each case and implement appropriate measures."

The local property market has been experiencing a price surge in apartments in certain areas, including Seoul and Sejong.

The government is moving to strengthen regulations on mortgage loans, which has been eased to encourage people to borrow money and buy houses as part of efforts to prop up the economy. (Yonhap)