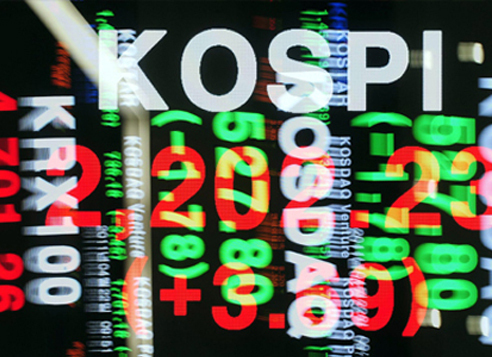 "As the first-quarter earnings season came to an end, market momentum has faded with offshore investors holding off increasing bets amid the Trump risk," said Park Chun-young, an analyst at Daishin Securities Co.

"The KOSPI is expected to be more prone to any changes in the pattern of overseas investors and external factors next week."

Shares of Hyundai Motor, the country's top automaker, and its affiliates finished higher on expectations for a set of shareholder-friendly policies after local media reported that they will likely embark on a revamp of its complex governance structure.

Hyundai Motor later denied such reports in its response to the financial regulator, saying the company has yet to decide on the plan.

Retailers and cosmetics firms also ended bullish on rising hopes for a thaw in strained Korea-China relations that have wreaked havoc on their businesses after Beijing imposed hostile policies in retribution for Seoul's deployment of a US anti-missile system.

The local currency ended at 1,127.20 won against the greenback, down 2.7 won from Thursday's close.