The following is the fourth in a series of articles featuring the impact of the landmark anti-corruption law that took effect Sept. 28. -- Ed.

There was no tug-of-war over the bill, which is -- or was -- considered proper etiquette in Korea. 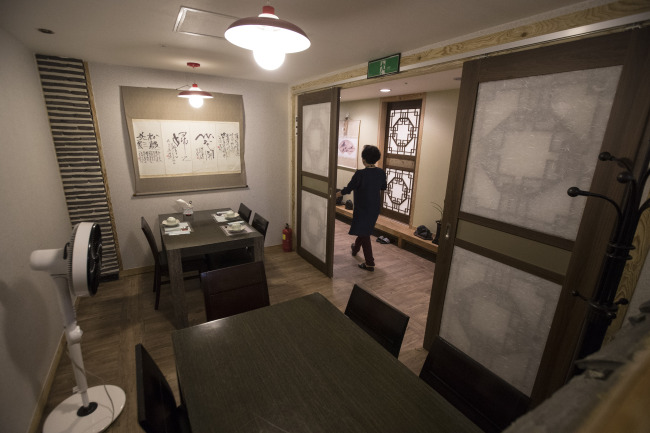 Behind the change was the implementation of the Improper Solicitation and Graft Law which went into force Sept. 28.

“We went Dutch just to be perfectly on the safe side since we both (as a public servant and a reporter) are subject to the new law,” said Kang.

The new law, dubbed the Kim Young-ran Act, named after a former Supreme Court justice who drafted it in 2011, is reshaping South Korea’s dining scene.

During lunch or dinner, civil servants, journalists and teachers as well as their spouses - some 4 million people subject to this law - now enjoy a lot fewer free meals because the Kim Young-ran Act bans them from receiving meals over 30,000 won ($26.50), among other strict stipulations.

The act’s effects are already apparent in Yeouido, where the National Assembly is conducting its annual audit.

Lawmakers are flooding the in-house cafeteria to eat inexpensive meals. In the past, they would have been treated by government officials hoping to curry favor with the members of parliament while under inspection.

With no free meals, those affected by the law have seen their meal options reduced, while splitting a bill has become the new normal.

This means restaurants and bars – especially those that are popular among government officials and journalists – cannot rely on lavish spending by companies or other groups using the venue to develop relationships with government employees and media.

Many high-end restaurants, popular dining places for government officials and reporters, have introduced set meals at below 30,000 won per person, which is significantly lower than their previous prices.

Such changes are already visible through credit card use.

South Korean credit card company BC Card Co showed on Monday that corporate credit card usage in terms of amount spent had declined around 9 percent – 8.9 percent in restaurants and 9.2 percent in bars - after the law took effect. BC Card compared two days after the enactment of the law – Thursday and Friday - with Thursday and Friday a month ago.

Another industry expected to be hit by this legislation is evening entertainment. For decades, “room salons”have been a popular destination for companies to entertain their guests with hostesses and expensive drinks as part of their business practice.

Such lavish spending is expected to decline with the changing corporate culture amid the landmark act.

Some conglomerates like CJ Group and Lotte Group have downsized their spending on hospitality for clients, government officials or journalists by banning corporate credit cards from being used at golf clubs and bars. The cards are also banned from use between midnight and 5 a.m.

Some companies are even banning meetings with any “questionable” counterparts to avoid even the slim chance of breaking the law, and their cautious approaches are reflected in many restaurants and bars that are seeing vacant seats.

During the week after the law took effect, numerous news reports covered how areas known for entertaining businesses in the busy districts in Seoul were less crowded. Some businesses were also seen offering discounted liquors to entice customers.

While questions remain the enforcement of the act would change the deep-rooted “jeopdae” culture in the country, changes so far appear to be significant.

“I don’t think Jeopdae culture would completely disappear but a lot of businesses are suffering due to the Kim Young-ran Act and doing business in this industry won’t be easy in the future,” said a member of Korea Central Council of Nightspot Business, an interest group representing bar and club owners.