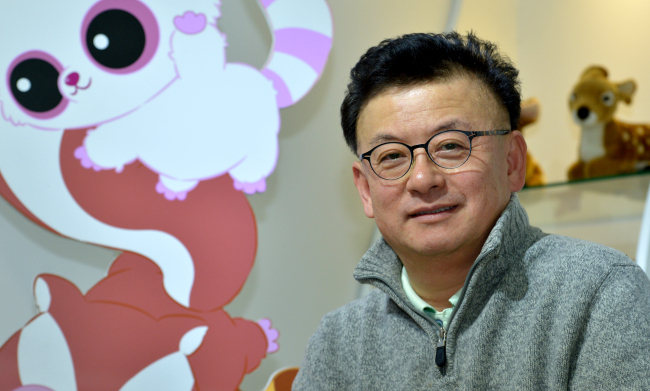 Choi Young-il has been around in the character scene for three decades. Even before he became the inaugural head of Walt Disney Studios Korea in 1992, he had already had 10 years of experience in toy and gift lines at local and foreign companies.

“Back then, the character business was quite unfamiliar to Koreans,” said the chief executive of Aurora World in an interview with The Korea Herald.

At Walt Disney Studios Korea, he mainly handled licensing for Disney’s music and publications, and he was the one who helped bring its famous touring ice show “Disney on Ice” to Korea.

Kim Yu-na, the nation’s figure skating champion, once said she first dreamed of becoming a skater after watching the show as a child.

Within four years since he took the helm, revenue jumped sixtyfold to 25 billion won ($23 million) at Walt Disney Studios Korea.

“Disney was surprised because we had suddenly become one of its top 10 money-making global branches,” he said.

After eight years of working for Disney, Choi moved to Warner Bros.’ Korean office. There he introduced Bugs Bunny, Daffy Duck, Porky Pig and other members of the “Looney Tunes” gang to Korean fans.

The most rewarding aspect of working for Warner Bros., however, was introducing local characters such as Pucca of Vooz Character System to help Korean firms make a global foray, Choi said.

Following the stints at Disney and Warner Bros., Choi was recruited by Aurora World Corporation’s founder and chairman Noh Hee-yeol in 2012.

Aurora is by far Korea’s largest toy company, and here, Choi was able to apply all he learned to help prop up the local character business.

Aurora is a publicly traded company that launched in 1981 as a doll and toy manufacturer.

At the time of Choi’s recruitment, Aurora was struggling to become a content-oriented company.

“Noh asked me to lead Aurora World to become a global character company,” the CEO said.

Since joining Aurora, Choi strengthened the firm’s character business in diverse areas including animation, product design, games and entertainment based on his past expertise at global firms.

“I thought we needed to go beyond the traditional doll production business,” he said, reminiscing on his first days at Aurora.

In April 2013, Aurora World managed to sign a licensing deal with YG Entertainment, one of the nation’s largest entertainment companies, to add YG’s content to a variety of new merchandise areas.

YG Entertainment is known for producing some of Korea’s top celebrities including Psy, 2NE1 and Big Bang.

“I believed that by applying Aurora’s production and licensing expertise to YG celebrities’ global fame, we would generate synergy in the global entertainment markets,” the president said.

The company also sought out a wider global audience with its flagship characters YooHoo & Friends.

YooHoo & Friends are endangered animals ― a bush baby, fennec fox, red squirrel, capuchin monkey and lemur ― who are not only adorable, but educational.

“The characters became known for their views on environmental protection, and they eventually earned huge popularity in Europe, where they are more environmentally conscious,” Choi explained.

Aurora World succeeded in supplying YooHoo & Friends for the McDonald’s Happy Meal in 6,000 stores in 40 European countries in 2013.

The characters now sell in global retailers including the British department store Harrods and Toys “R” Us in the U.S.

Now over 90 percent of Aurora’s sales come from exports.

Thinking out of the box was the strategy that bred this success. In most cases, animation comes first, then a related character business follows when the animation gains popularity.

“We did it backwards. As a doll producer, we wanted to promote our dolls first, and the animations were created as a tool for promoting them,” Choi said.

YooHoo & Friends were made into a TV animation series in 2009, with the stories centering on their encounters with other endangered animals around the world and visiting U.N.-designated cultural heritage sites.

“As the first episode was somewhat educational, we tried to make the second episode more entertaining with the message that good will always triumph over evil,” the chief executive said.

The animation is currently broadcast on the nation’s biggest television network KBS and on foreign media networks in 40 countries. It aired on the U.K. channel POP, Cartoon Network in the U.S. and ABC3 in Australia.

He said he is delighted to have witnessed Aurora’s self-transformation into a global company.

“We will continue to expand our character business and aim to see half of total sales coming from royalties by 2015,” Choi said.